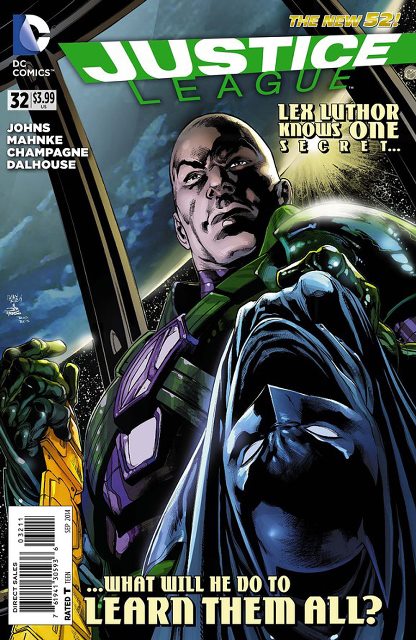 Lex Luthor continues his acclimation to his life as a one of the world’s greatest heroes as they search for the mysterious power threatening to unravel our world. But are his sights really set on the Dark Knight? And are the Dark Knight’s set on him? Plus, someone else is targeting Luthor and his new allies – a man who believes he is Luthor’s superior in every way…and he may be right! Here comes The Chief and his treacherous Doom Patrol to The New 52!

Picked because: Holy exposed secret identity, Batman, Lex Luthor knows you’re Bruce Wayne! Last issue had so many amazing plot threads it was hard to believe it was all contained in a single issue. Lex Luthor has done more than uncover Batman’s secret identity, though. He’s made a strong case for why he belongs in the Justice League. But he’s about to have that put to a real test now that the Doom Patrol is in play and they’re after the new Power Ring, too. Geoff Johns has weaved a lot of plot points together for this story arc and it’s so great to see the payoff of nearly two years of story setup actually happening. While Ivan Reis is missed on art, Doug Mahnke steps in to the role and does a masterful job. He and Johns had a great run on Green Lantern and it’s clear this team works incredibly well together. It’s also fun to see Cyborg and Shazam spending time together in the Watchtower and reminding us that they’re both still fairly young. The more of that pair we get, the better. Geoff Johns’ Justice League might have had a slow start in 2011, but today it’s become must-read comics. He’s bringing those big-idea, crazy concept sensibilities he used during his Green Lantern days to this title and no DC fan should be missing it. 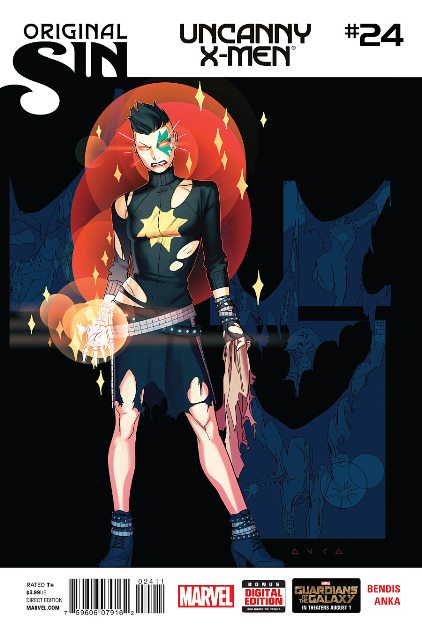 With the secrets held within Xavier’s will laid bare, how will the X-Men cope with the shadows of his past? Could a power previously unknown to them now be their greatest threat?

Picked because: While All-New X-Men (also by Bendis) is easily the stronger of the two main X titles, this issue holds a lot of promise and looks to be a surprisingly new-reader friendly jump-on point. Also, new Dazzler costume and her hunt for Mystique is going to pick up some steam! But the meat of the story is all about the last will and testament of Charles Xavier and who he left the Xavier institute property to. With Scott Summers now a wanted fugitive and seen as responsible for Prof. X’s death (what, again?), there are lots of mutants who would just as soon execute him as look at him. Bendis has been telling one of the more intriguing stories in X-Men history since he relaunched the main X books a couple of years ago. While it would have been nice for the art to be more consistent, at least the story keeps moving in an entertaining direction. If you feel intimidated by the amount of prior story, jump on the Marvel Unlimited app (the Netflix of Marvel Comics) and start catching up. It’s one of the most worth-while purchases you’ll ever make as a Marvel Comics fan. And then, you should make sure to support your local comic shop by jumping on this title here. 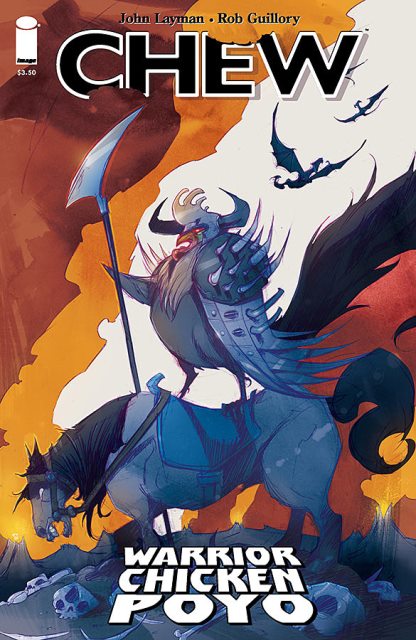 Comics’ most beloved homicidal cybernetic kung fu rooster returns for what we humbly anticipate as the most important literary achievement of the 21st Century. All other comics will be made irrelevant. The best thing that’s ever happened to comics, and possibly the best thing that’s ever happened… EVER! Plus: an all-star pin-up gallery from some of the most staggeringly talented artists in the industry! DO. NOT. MISS.

Picked because: It’s time for another Poyo one-shot and if it’s as fun and hilarious as the last one, it’s worth more than its cover price. John Layman is really at his best when working in his own world. Chew remains one of the best comics anyone can spend money on each month and these occasional one-shots give a nice, if even more absurd, break in the action. Poyo is, of course, a cybernetically enhanced assassin rooster (yep, rooster), charged with carrying out various missions for the U.S. government that no ordinary agent could handle. He’s nearly unstoppable and never takes prisoners…but could someone have taken him prisoner and replaced him? That’s how it looks in this story which also features the biggest crossover moment Image has tried yet: Poyo vs. The Walking Dead! The Chew/Revival crossover was half-fun, half-meh, but with this being entirely John Layman and Rob Guillroy, get ready for all fun. Even if you don’t read Chew, this is a fun way to introduce yourself to the insanity of it all, but know going in that this is usually as crazy as the main series ever really gets. This is how Layman cuts loose and really, we all win because of it. 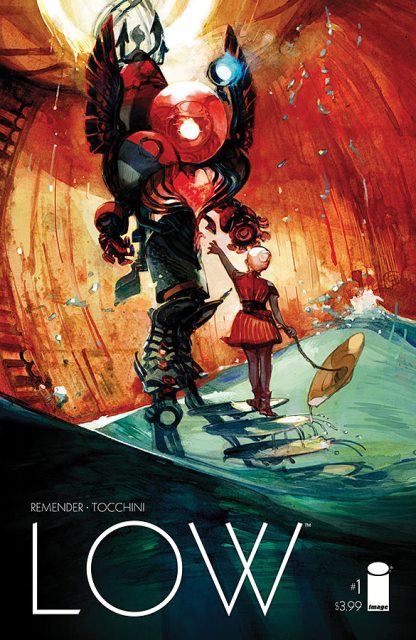 In the far distant future, the sun’s premature expansion has irradiated Earth, sending humanity to the lowest depths of the seas, hidden within radiation-shielded cities, while probes scour the universe for inhabitable worlds to relocate to. After tens of thousands of years, a single probe returns, crashing on Earth’s surface, a now-alien place no human has seen for many millennia. Frequent collaborators RICK REMENDER (BLACK SCIENCE, Uncanny Avengers) and GREG TOCCHINI (Last Days of American Crime, Uncanny X-Force) dive into an aquatic sci-fi/fantasy tale following two teams from the last remaining cities undersea as they race to the most unexpected alien world of all—the surface of Earth.

Picked because: Remender fans will definitely not want to miss this one. When it comes to high-concept sci-fi, there are few writers in comics who do it better than him. Much like The Wake, this one is taking us to an undersea world that turns Earth into something we likely won’t recognize. But this time, it’s humanity that’s living under water. But what makes these concepts work is the character at the heart of it. Remender can be hit-and-miss with his character work, but in his indie offerings (see also Deadly Class and Black Science) he’s nearly always a hit. But the star of the show might actually be Greg Tocchini’s art. His painted style is a rarity in the comics medium, with only the likes of Esad Ribic and Jill Thompson being able to create the same kind of vivid storytelling and panel work. But much like Remender’s other works, this one won’t be for the kiddies. As Image continues to roll out the big-name creator-owned works, this one looks like it could easily join the ranks of the top books such as Saga, Velvet and Lazarus.