New Hotness has evolved…and is about to change forever! Both DC Comics and Marvel are producing major events called Convergence and Secret Wars, respectively. New Hotness has focused on telling you what to look for in both events and which tie-ins might just be worth checking out. Convergence is over and Secret Wars will now be covered in the weekly Sellers Points: Secret Wars Report. Next week, New Hotness becomes The Spinner Rack. It’s a weekly series highlighting the big news from the world of comics, comic book movies and TV shows. So, one last time, MASSIVE SPOILERS ahead. 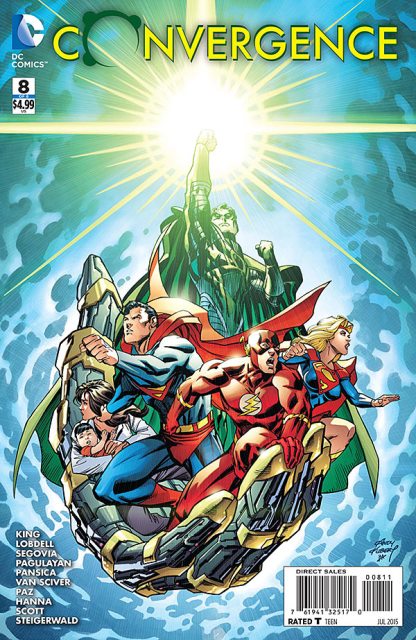 This ride has had a series of ups and downs, but it’s nice to see things end on a relatively not-so-bad note. Normally it’s hard to enjoy a book with so many pencilers, but this one handled the presentation fairly well. Each got a chance to bring something unique to the story and it all still felt like it fit.

Last issue Deimos was dead thanks to Parallax/Hal Jordan and the power of the time travelers Deimos absorbed was loosed on the multiverse causing it to go into a kind of collapse that would end it rather than create a new timeline. Luckily, Booster Gold, his sister Goldstar and the (as it turns out) former Booster Gold from an alternate universe now called Waverider, show up. They have a plan to reabsorb all that energy released, but only the Brainiac responsible for the whole mess can do it. Naturally, the various Supermen are not on board with this idea. Too bad, Waverider finds Brainiac and brings him back to Telos anyway.

It’s a bit predictable in this way, but there are some interesting happenings that will potentially have repercussions on the entire DC Comics line in the coming months and years. Namely, Brainiac reveals that he’s the original Brainiac and has been traveling through the multiverse for a really long time. His warped look is due to exposure to the energy produced by traveling between universes. It’s changed him so much, he’d all but forgotten who he used to be. Now, with this time power he’s absorbed he can be that version again.

The biggest take away is that all the Earths that were thought destroyed now exist again and the various captured cities, heroes and villains are all being returned. The only issue is that the original Crisis on Infinite Earths event is preventing Brainiac from completing the transfer. He tells the heroes that event is the catalyst for the constantly reshaping universe. If it can be prevented, then the other universes don’t have to die. Certain characters will still die, such as the pre-Crisis Supergirl and Barry Allen, but the destruction of the multiverse can still be stopped using the power of the time stream and the knowledge these heroes now possess. This is how the New 52 Earth and many of the post-COIE worlds can still exist as the event happened, but the multiverse wasn’t destroyed. It’s a bit heady, but it is a way for DC to have its cake and eat it, too. And for all those folks complaining about the lack of “their DC” to take a little comfort in knowing those worlds are back in play.

Of course, there’s still the issue of the Earth 2 heroes and where they’re supposed to go. Easy enough, Telos, in his last act as a nearly all-powerful being, severs his ties to the planet of the same name and moves it to the Earth 2 universe. He even puts it right where Earth 2 used to be. Green Lantern informs the group that with all those cities gone and Telos’ ties severed, the green is now returning and the planet is coming back to life. And, because this also essentially prevents the events of Futures End, the Earth 2 survivors are still floating in nearby space in their escape ships. All’s well that ends well.

As an event, Convergence has been fairly lackluster. Its early chapter likely lost many who just couldn’t see dropping $3.99 a week on a book that wasn’t wowing them. It didn’t manage to address a lot of the problems until nearly six weeks in and that’s a long time for a weekly. While the Easter Eggs were great, if there were new readers trying to get into DC through this event, it’s doubtful any of it made sense to them. Unfortunately the overabundance of exposition in the early offerings and inconsistent art throughout didn’t do the series any favors, either. The best that can be said is DC has done far worse than this (Final Crisis). But it’s also done far, FAR better (Infinite Crisis, Blackest Night).

This series was really meant for those who’d read Earth 2 and World’s End and those planning to read Earth 2: Society (which actually looks pretty good, by the way). It’s hard to say if the impact from these events will be seen in any upcoming DC Comics titles, but the possibilities are virtually endless now. The multiverse is back in a big way and that’s something to be thankful for, at least. If the story getting us there had been better, it would have meant more. Bring on June and the return of our regularly scheduled lineup! 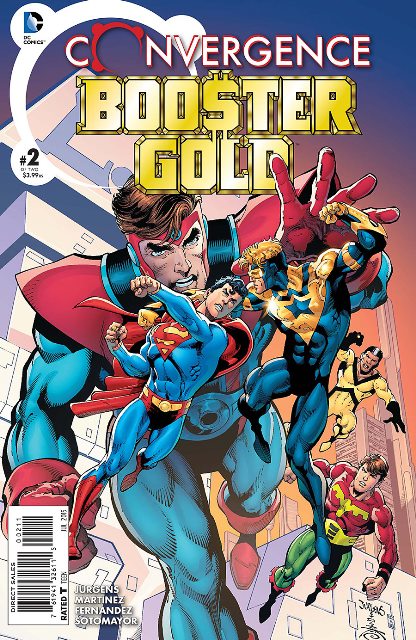 This issue is seriously important to the main Convergence story. If you aren’t picking up any other tie-in set, you need to get Booster Gold #1-2. It’s here you’ll get the origin of Waverider and a really good explanation for how the time travel powers and placement of Vanishing Point work.

But more than that, you get a reunion of Booster and Ted Kord, aka Blue Beetle. This Ted Kord hasn’t been killed by Maxwell Lord yet as Max hasn’t been revealed as a telepathic villain. Although Booster still remembers the events of Infinite Crisis quite well. The emotion in their meeting here is captured perfectly by both Jurgens’ script and Martinez’s pencils. And by perfectly, I mean there are some great well-timed jokes to remind you why these two are such a great team.

If you’ve been following Booster since his time in Justice League International at the beginning of the New 52, this issue is the culmination of that journey. Jurgens has spent a lot of time with his best creation and he brings the story to a very satisfying sort-of conclusion. The ending leads directly into the final issue of Convergence, so you’ll have to pick that up to see how it all works out. Other than that being somewhat of an annoyance, this issue has some of the funniest and most powerful moments of the entire Convergence event.

Surprisingly, the only somewhat ‘meh’ moment of the issue comes in the action section. Superboy and The Legion of Super-Heroes are really just there to be made fun of and provide a lackluster fight. While funny, it felt shoehorned in just to have a battle scene that ultimately went nowhere. But, the final scenes are some of the best Jurgens has ever crafted, so that little bit can easily be forgiven. Everyone reading this event needs to buy this two-parter.

All that can and should be said upon opening the first page of this one is…well, take it Keanu…

Sorrentino may have made a name for himself during his time as the artist on Green Arrow with Jeff Lemire, but he’s about to reach superstar status with this! Those who remember the original Mark Millar and Steve McNiven Old Man Logan will be able to dive right into this and feel like they never left. The transition between the two is so beautifully seamless.

Sorrentino’s art is vastly different from the more “clean” and often over-the-top style of McNiven, but it is equally inventive and even more gorgeous. Jaws are going to be dropped more than once in this issue and this story is just getting started.

Even more striking is the amazing characterization of Wolverine. This is a narrative that acknowledges its part of the Secret Wars world, but is acting more as a sequel to the previous Old Man Logan story. It picks up almost right where the previous series left off. Logan is doing exactly what he promised to do in trying to make the world better after he killed quite a few bad guys in the previous story. But, there are some big questions being asked and the unintended consequences of his actions are beginning to bubble to the surface. Bendis didn’t create this idea, but does he ever get how to develop it in a natural direction. It’s almost like this was his world all along. Saying he “nailed it” isn’t strong enough.

The price tag is a bit high, but who cares? This is worth it and more. Get on this now!