We’re back here in the Hoth Region, which is home to the biggest Cinderella left in the tournament — 1995’s Toy Story. Buzz and Woody knocked off No. 2 seed Alien in Round 1, and now take on Goodfellas here in Round 2. Can Andy’s toys continue to advance? Before we get started, let’s take a look at what the overall tournament bracket looks like. A larger version can be viewed here. 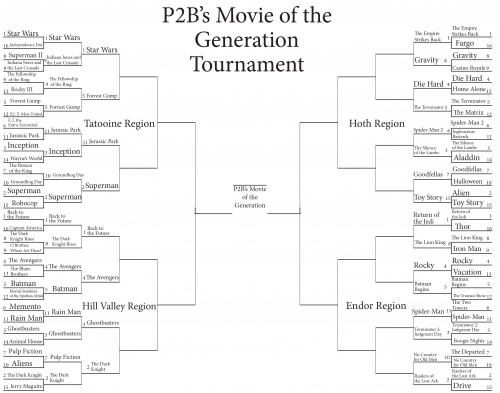 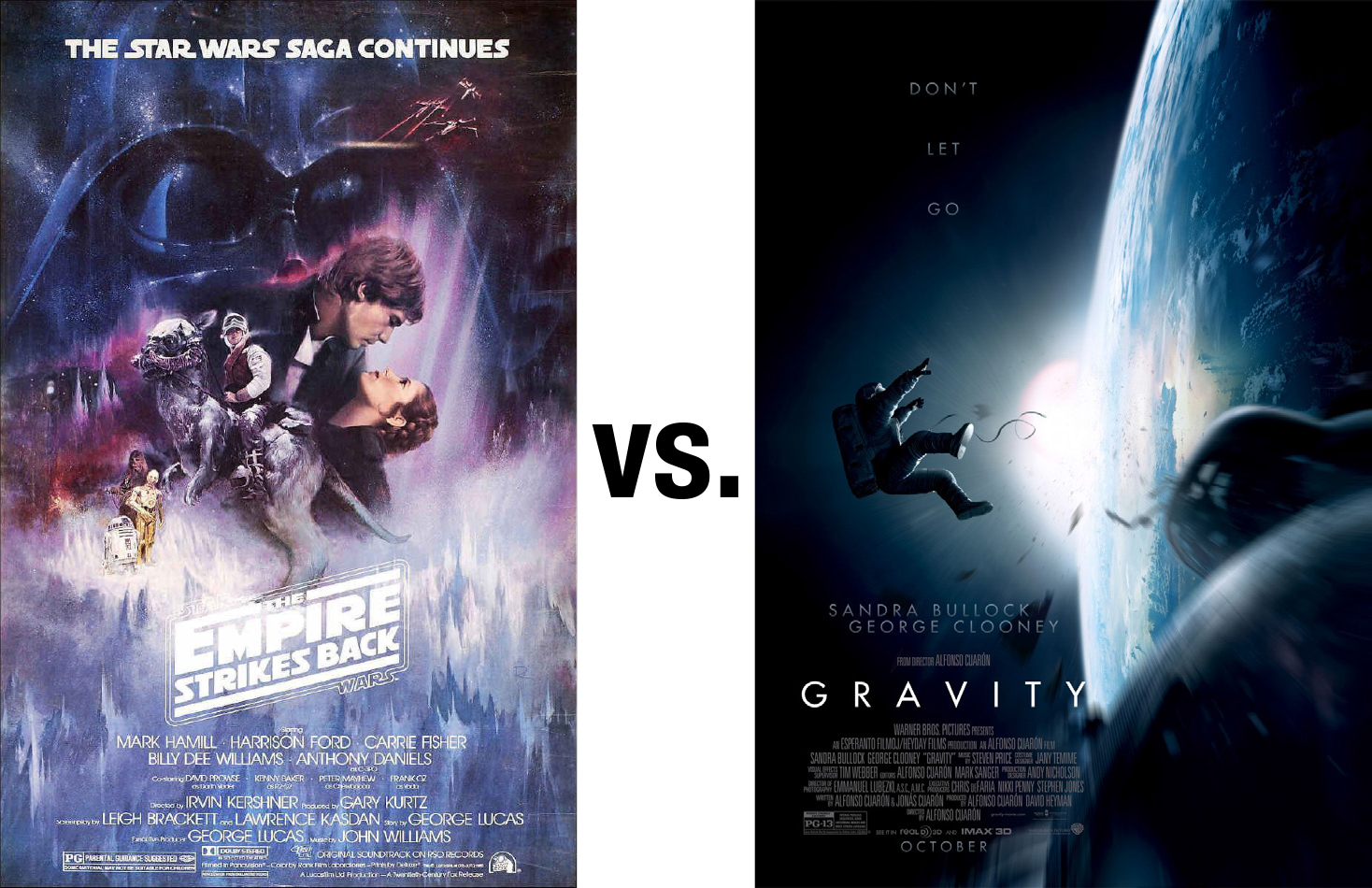 The Empire Strikes Back: Finished No. 1 in 1980 with 47 points, ranked by 10 of 10 voters, highest ranked by Glenn Butler, Nick Duke, Aaron George, Greg Phillips, Kati Price, Andrew Riche, Russell Sellers, Steve Wille and Andrew Woltman at No. 1.
Round 1: Defeated Fargo 9-1.

Kati Price: Honestly, even if I weren’t a huge Star Wars fan, this wouldn’t have been a hard choice for me. I was not at all a fan of Gravity. I have been told that if I hadn’t seen it at a drive in, I would have enjoyed it more: that somehow the movie theater or IMAX experience would have been more enjoyable. IMAX does seem to have that effect. I mean, I saw Transformers: Age of the Fallen in IMAX and enjoyed it. However, I just don’t see Gravity having any kind of appeal to me in any medium. If you enjoyed the movie, I mean no offense, but to me it was a boring movie about someone floating in space. I just didn’t get it or anything from it. The Empire Strikes Back; now that is a space movie. This film has it all. Storyline, character development, dialogue, I could go on and on. Meanwhile, Gravity has a somewhat decent film score.

I don’t think people will be talking about Gravity for a very long time. There was a huge Gravity craze for a while, but it won’t stand the test of time. Star Wars will. Gravity did have it kind of tough going against what is arguably the best of the Star Wars trilogy but for me it wouldn’t have stood up against any of the Star Wars films; that’s including Episode I in all of its Jar Jar Binks glory. But, hey, that’s just one girl’s opinion. I’m sure many would disagree and I apologize for dumping all over Gravity, but it just didn’t do anything for me.

I predict the final four will be the three original Star Wars films and perhaps The Dark Knight depending on how matchups go, with Empire taking all. I know for me personally Empire beats all movies on our list, but we will see how the voting goes. Even if you loved Gravity, unless you just hate Star Wars in any shape or form, I would think you would have to go with Empire Strikes Back over Gravity. But like I said, that’s just one girl’s opinion. 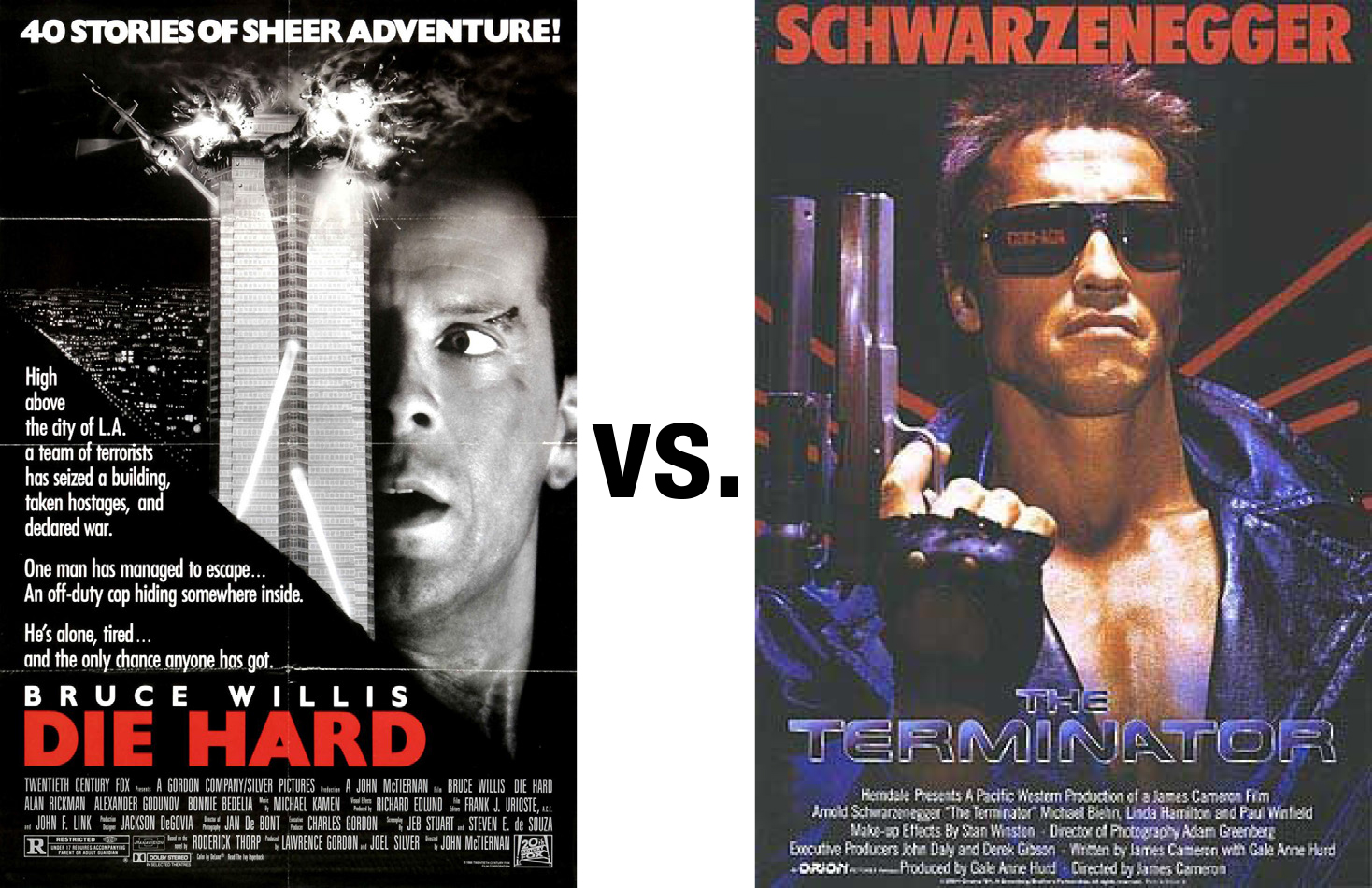 The Terminator: Finished No. 2 in 1984 with 31 points, ranked by 9 of 10 voters, highest ranked by Glenn Butler, Nick Duke, Anthony Estrada, Aaron George, Greg Phillips and Russell Sellers at No. 2.
Round 1: Defeated The Matrix 5-4.

Glenn Butler: Many of the matchups in this tournament have pitted extremely different movies against each other. The Empire Strikes Back vs. Fargo, Silence of the Lambs vs. Spider-Man, Inception vs. Wayne’s World — it can be hard to approach some of these, as the movies exist in completely different spaces and are doing vastly different things.

Die Hard and The Terminator, however, is an intra-genre matchup of two very similar movies, which for the loser just isn’t fair. The Terminator is a classic in the action genre, highly influential, bringing acclaim and lengthy successful careers to its major figures in front of and behind the camera. But Die Hard is even more of a classic, was even more influential (how many movies and TV shows have done “Die Hard on a ______” plots?), and similarly gave Bruce Willis a long and fruitful film career that split off in a direction quite orthogonal to his then-ongoing turn in Moonlighting. The Terminator is also far more overshadowed in the popular consciousness by its sequel than Die Hard is (though I persist in what is perhaps an idiosyncratic preference for Die Hard 2). Both movies feature working-class heroes suffering a lack of resources facing off against seemingly unstoppable foes, one of them a virtually-invincible robot assassin from the future, the other the twin forces of violent greed and police incompetence. Conveniently enough, both have excellent European accents. The Terminator splits its heroic roles between Michael Biehn and Linda Hamilton — giving us, considering Linda Hamilton here and Sigourney Weaver in Aliens, a few years in the mid-1980’s when there were two women with leading roles in action films, a golden age as yet unmatched. Die Hard, though, invests everything in John McClane as a singular hero, with a bevy of delightful side characters, but always coming back to the strife one man has to go through to foil a high-tech robbery just so he can go out with his wife.

**One voter abstained from voting on this matchup on the basis of not having seen either film. 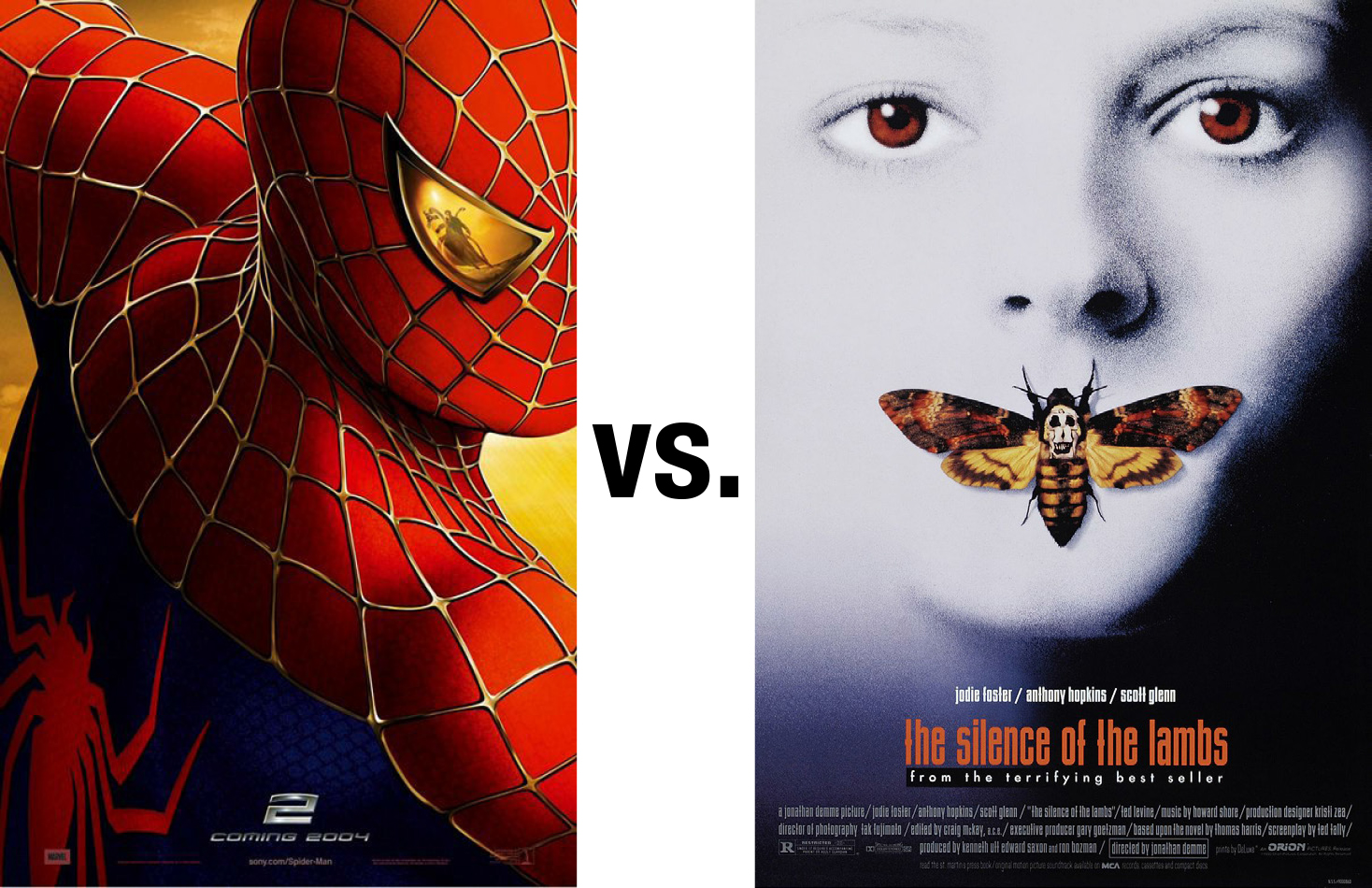 The Silence of the Lambs: Finished tied for No. 1 in 1991 with 36 points, ranked by 9 of 10 voters, highest ranked by Nick Duke, Greg Phillips, Andrew Riche, Steve Wille and Andrew Woltman at No. 1.
Round 1: Defeated Aladdin 8-2.

Greg Phillips: Spider-Man 2 is one of the great superhero films, something that really kicked off the modern era of great superhero flicks in some ways. However, Silence of the Lambs is a stone-cold classic not just within its genre but in all of film. From the superior performances to the timeless characterizations and tense storytelling, it’s superior in virtually every way to Spidey’s best film.

Final tally: The Silence of the Lambs 9, Spider-Man 2 1 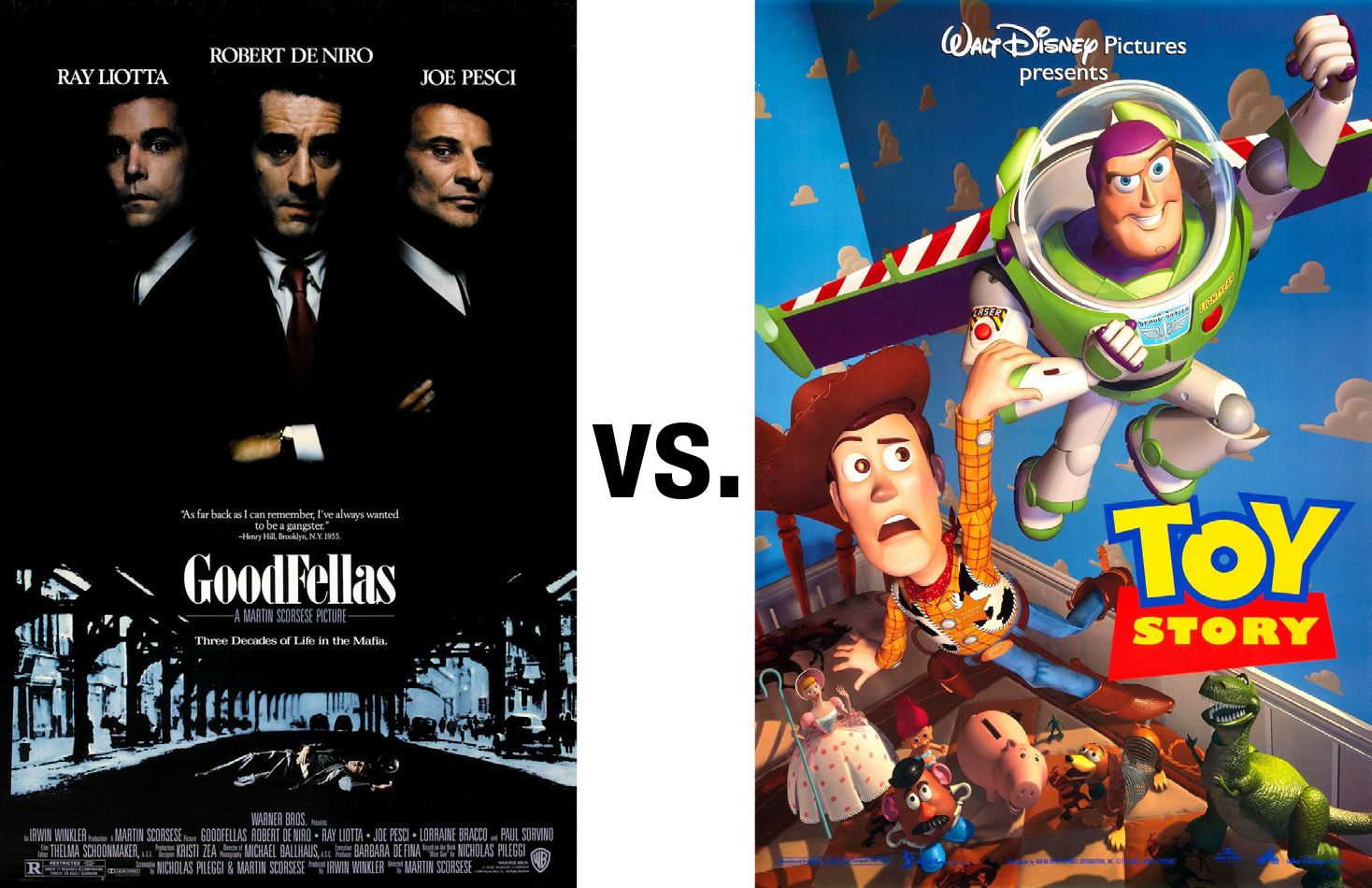 Aaron George: Andy’s door burst open. Before he had a second to move, the men in suits were on him. They focused on Woody. The cowboy fought valiantly, taking shot after shot from the multiple baseball bats, but after a sudden blow from Tommy DeVito’s Louisville slugger, the light in Woody’s eyes faded and the last words he heard were “Who’s funny now?”

It didn’t go any better for Rex who was cornered by Frankie Carbone and Billy Batts. Rex screamed “I don’t own a shoe box!” but his pleas fell on deaf ears as the gangsters kicked and stomped him until the floor ran red with his dinosaur blood.

Mr. Potato head and Slinky Dog tried to negotiate with Paul Cicero, but Cicero methodically removed Potato’s eyes, ears and mouth before stomping his spud carcass to bits. Henry Hill grabbed slinky and pulled and pulled and pulled — all the while slinky could swear that he was hearing a guilt-stricken inner monologue. Slinky wondered who Karen was and why Henry apparently wanted to kill her.

The worst fate of all, however, was in store for Buzz Lightyear. After the initial massacre, his futile attempt to fly quickly turned into Buzz having his head in a vice. Tommy tightened and tightened and just as Buzz’s eye was about to pop they stopped. The courageous Lightyear could do nothing but sit and watch as these “good fellas” stomped, kicked and burned every toy in Andy’s room. He watched his friends die that day, all the while wishing for the cool mercy of Sid. A mercy that would later come as they dragged Buzz out to the desert and buried him alive. The image of a confused and destroyed Andy, standing in a pile of fire and broken toys, being tossed a couple of bucks by a man called “The Gent” would haunt him for the remaining thirty minutes of his broken life.

Also, all this happened in one continuous shot.