One thing we at Place to Be Nation like to celebrate is the subjectivity inherent in entertainment — be it in wrestling, comics, music, television or, indeed, film. With that in mind, ten members of the PTBN staff will be picking the movies of the PTB generation. In this series, panel members will collect their five favorite films of each year, beginning with the year in which the oldest writer was born — 1976. The only rule given to each contributor was to provide his or her own criteria. Some writers may go with the most artistic films, while others might side with the most iconic blockbusters. We welcome your lists on Facebook and Twitter. Each staff member has submitted a list of five movies from 1993 ranked 1 through 5. A first-place vote is worth five points, a second-place vote worth four points, and so on. Using that point system, we have identified the top 5 movies of 1993.

1993 saw yet another tie at the top, as a Bill Murray comedy went up against an adventure 65 million years in the making. But before we reveal the top 5, let’s see the movies that received votes, but fell short of making our final list.

The Nightmare Before Christmas — 7 points

So I Married an Axe Murderer — 4 points

5. Batman: Mask of the Phantasm

Russell Sellers: Of all the Batman films that have been made over the years, this is the one that truly captures all the best aspects of the character. It’s set in the continuity of Batman: The Animated Series and was written by series co-creator Paul Dini and directed by the show’s other creator, Bruce Timm, along with a host of others who took on various scenes. The film tells two parallel stories, one set in the past leading up to Bruce Wayne (voiced by Kevin Conroy) becoming Batman and the other set in the present of the time when his ex-fiancé’ suddenly reemerges after years in hiding from the mob. A new villain/vigilante calling himself The Phantasm also comes to Gotham around the same time and starts killing former high-ranking mob bosses.

The film’s deep character exploration of Bruce Wayne and what keeps Batman from stepping over the line from hero to vigilante are second-to-none. Even the Christopher Nolan Batman films didn’t quite capture this level of complexity, though they came close. And Mark Hamill’s Joker performance might be the best one he ever turned in during his time with the series. The animators were completely free of the constraints and censors of the TV show, so you really have no idea what Joker may do next in any of his scenes. Great character moments with some of the best animated action ever committed to film combine to make this a must-see for any Batman fan. 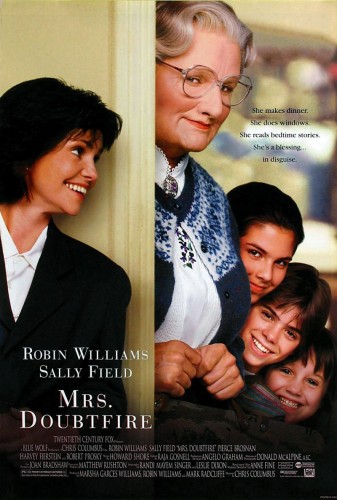 Andrew Riche: Even before the film was made, every one knew that Mrs. Doubtfire, the Tootsie of the 1990’s, would be a can’t miss. Director Chris Columbus was fresh off of making boatloads of money for 20th Century Fox with the first two Home Alone films while superstar Robin Williams had just had his most profitable film as the voice of the rambunctious Genie in Disney’s Aladdin. This was their first of three collaborations together in the 90’s, and it was by far their best. Williams plays Daniel Hillard, a father who loves his three kids a lot more than he loved being a husband to Miranda, played with perfect charm by Sally Field. When Miranda puts a line in the sand and files for divorce, Daniel begs her to not keep him away from his children.

With divorce proceedings underway and Miranda needing a sitter, Daniel finds a quite unconventional way to stay with his kids: By pretending to be an elderly British nanny named “Euphegenia Doubtfire.” One make-up session later with his gay brother Frank (played hilariously by Harvey Fierstein), Daniel becomes Mrs. Doubtfire. Doubtfire becomes such a good caretaker that Daniel even surprises himself by how well it is working. Shenanigans ensue as Miranda dates a new man, played by Pierce Brosnan, and the kids accidentally discover that Daniel and Mrs. Doubtfire are one and the same. Although the gig is eventually up for Daniel at home and the divorce is finalized, the gig continues for Mrs. Doubtfire as “she” stars in a children’s program and Daniel gets to see the kids as often as he wants.

While the movie is still incredibly funny and well-paced, Columbus never forgets the heartache and sadness that divorce can weigh on children and the mothers and fathers who have to settle for life without them. The movie does have a happy ending, but the split-up is still official and does the impossible: It gives a movie about a man pretending to be a blue hair a gentle sense of realism. But my God, the laughs are still there, thanks in large part to Williams’ incredible performance, a true comedy pioneer in his prime. The fire in the kitchen scene makes you howl and I still laugh out loud when Doubtfire accidentally tells the television producer that she has to “piss like a racehorse.” While the Home Alone movies were incredibly successful and timeless in their own ways, I still think it is Chris Columbus’ best film, and although Mrs. Doubtfire is an old lady, she never loses her touch. 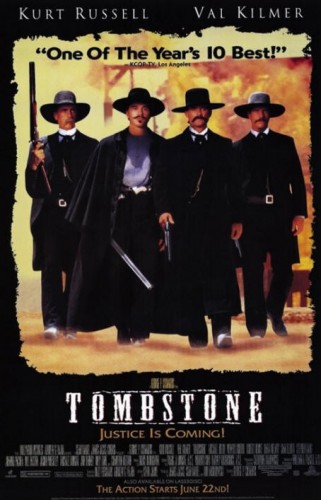 19 points, ranked by 5 of 10 voters, highest ranked by Greg Phillips and Steve Wille at No. 1

Aaron George: Let me say right off the bat that I am not usually a fan of westerns. I had never loved a western until I watched Tombstone. When I did finally see it, I wanted to marry it and put a baby inside of it. When you think about it, it’s pretty impressive I was willing to make that kind of commitment at age fourteen. It was that good.

Tombstone tells the story of Wyatt Earp trying to make a peaceful life for himself after his lawman days are done. While I didn’t know it then, if any movie starts that way you’re bound to get a story where your lead is forced into a life of violence, and in the best cases revenge. We get the best case scenario here and what follows is a wonderful account of badasses being…well badass. There’s something magical about a movie that makes you want to cheer when Kurt Russell says “You gonna do something or are you just gonna stand there and bleed?” Fuck it, I’ll be honest, I did cheer. I cheer every time I watch it. There’s so many awesome moments like that in the movie, by the end I’m hoarse and I’ve alienated all my friends.

Kurt Russell is great as Wyatt Earp. He’s hard when he needs to be and has just enough vulnerability to make you want to give him a hug. Powers Booth and Michael Biehn play the Big Boss Man heel (a complete asshole) and the Kevin Nash heel (cool guy you wouldn’t cross) wonderfully and are more than a match for Earp’s brothers played by Sam Elliott’s moustache. The rest of the cast is strong, and the only weak link being Brandon Walsh, who should have been hogtied and pistol whipped into a pile of goo. (He was actually fine.)

And oh yeah… the movie totally belongs to Val Kilmer. He is soooooooo good as Doc Holiday. Watching it today, it’s kind of astounding that he didn’t go on to be one of the biggest stars in Hollywood off this performance. He was cool in every scene and carried himself like the baddest gunslinger in the west despite nearly keeling over and dying of tuberculosis. He was so convincing in his role of “greatest man who ever lived” (Alexander the Great is number 2, Brian Doyle Murray number 3) that he made “I’m your huckleberry” cool again.

If you haven’t seen Tombstone, shame on you. You’re missing out on some great fight scenes, some tough men doing tough things and mustaches so manly that the Village People would pant with jealousy. All topped with a great story that manages to pull on the heartstrings more than I’d like to admit. So go see it…huckleberry. (See, still cool.) 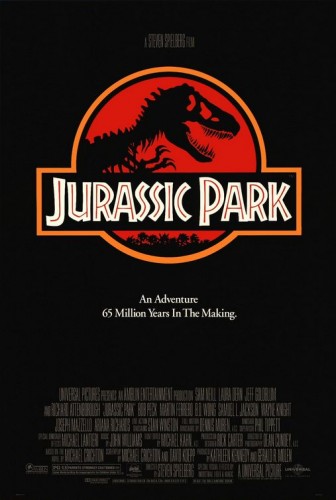 Nick Duke: There’s so much to say about Jurassic Park, especially for someone who was only five years old when Steven Spielberg’s classic hit the big screen. It’s the first movie I can remember being “wowed” by, a movie where I just sat there and stared at the screen without moving for the entire thing. And, as the years have gone by, my love and appreciation for the movie has only grown.

Clearly, the stars of the show here are the dinosaurs, expertly rendered by Stan Winston in animatronic form and by Industrial Light & Magic when CGI was necessary. Whether it’s the brontosaurs, dilophosaurs, tyrannosaurs or velociraptors, you can’t help but hold your breath whenever they appear. Few films still have that effect on me as I get older, but this one still does. But, while the dinosaurs alone could have made for a memorable film, it’s the human characters that help to carry it to another level. Sam Neill’s Alan Grant and Jeff Goldblum’s Ian Malcolm are unquestionably the two most memorable characters, especially Goldblum as Malcolm. Throw in Samuel L. Jackson as Ray Arnold (“Hold on to your butts.”) and Wayne Knight as Dennis Nedry and you’ve got the makings of a classic.

But perhaps even more important than the film’s human characters is its score. That main theme still puts a pit of tension and excitement in my stomach, and I’ll never, ever get tired of “Welcome to Jurassic Park.” When I visited Universal Studios a few years back, one of my favorite moments of the trip was just walking through a replica of the giant wooden gate and hearing that theme blaring over the loudspeakers. Sequels have come since 1993 to middling results, with an attempt at relaunching the franchise set to hit theaters next year. Here’s hoping it can return the same sense of wonder and excitement that was so expertly captured more than 20 years ago.

21 points, ranked by 5 of 10 voters, highest ranked by Glenn Butler and Anthony Estrada at No. 1

Greg Phillips: Imagine being forced to live the same dull work day over and over and over and over again. Come to think of it, many of us probably already feel like we do that. Yet Harold Ramis’ Groundhog Day examines that concept on a quite literal level. Phil Connors (played wonderfully by the great Bill Murray) is a grumpy meteorologist who can’t be bothered with the small-town happenings of Punxsutawney, Pa., when he’s assigned to travel there to cover the annual Groundhog Day ceremony.

As a small town reporter, I can relate to Phil in many ways — the cynicism that comes with years in the field, the tendency to miss the beauty of life amidst the mundane repetition of the work week, the tendency to rely on humor to deal with any situation that arises. Make no mistake, Groundhog Day is a funny movie. The jokes hit on nearly every level, Murray delivers his lines as sharply and brilliantly as ever, and his brother Brian nearly steals the movie with a fantastic portrayal as the distinct-sounding mayor of Punxsutawney. Yet what makes this film a classic, and what keeps me coming back to it year after year, is the incredible heart. The rapport between Murray and Andie McDowell jumps off the screen to create a wonderful romantic story. More importantly, though, the movie makes us empathize with Murray’s journey from hardened cynic to hopeful lover. In many ways, it encapsulates the lessons of A Christmas Carol and It’s a Wonderful Life while weaving its own narrative about the importance of living life to its fullest and appreciating what one has in his or her life. This is one movie I don’t mind watching year after year after year after year after year ….