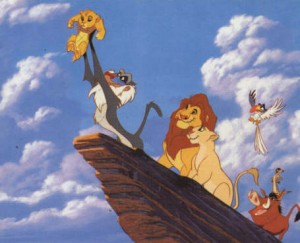 Prince William and the Duchess of Cambridge welcomed an 8 lb 6 oz healthy baby boy this afternoon at a hospital in London, England.  Although we don’t know his name yet, his official title is His Royal Highness [name] of Cambridge.

There is a lot of pressure on this infant already, as he is now 3rd in line for the throne, moving Harry to 4th in line (sorry Harry, but that’s just the way it is). Earlier this year, the U.K. changed the rights of the succession and regardless of the gender, the royal infant was set to be 3rd in line.

Rather than list out all the mundane details you can read EVERYWHERE, I thought I’d list out some of my favorite tweets reacting to the birth of His Royal Highness:

I wish this was a real episode, I feel like we’re all getting cheated out of seeing Elaine dance again.

I am pretty sure I recommend my name to every single one of my pregnant friends, so I totally understand Steve Martin.

If this were really happening, none of us would see the Breaking News headline because it would be the Apocalypse.

I hope the baby at least gets a direwolf. 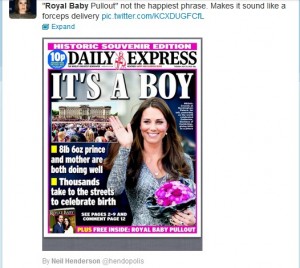 That’s a rather unfortunate choice of words.

Ahh crap. I knew J.K. Rowling had her hand in this.

I’ve had this song in my head all day. If His Royal Highness doesn’t sing this song, I’ll be seriously disappointed.