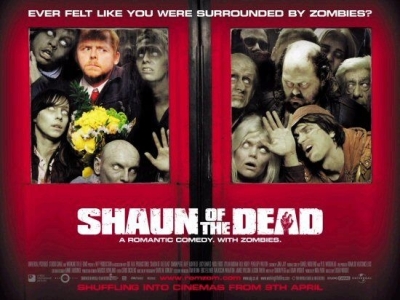 Plot: Shaun decides to turn his moribund life around by winning back his ex-girlfriend, reconciling his relationship with his mother and deal with an entire community that has returned from the dead to eat the living.

Review: You’ve got red on you.

Shaun of the Dead (a take on Dawn of the Dead) helped kickstart the zombie craze in the early 2000’s that we still see to this day (thanks Walking Dead). At the time Shaun came out, however, it was a fresh take on the genre and introduced the world to Simon Pegg and Nick Frost. Thank God for that.

Shaun of the Dead tells the story of Shaun, an average guy working in an electronic shop in London. He spends his days with his best friend, the unemployed lazy oaf Ed (Nick Frost) and his girlfriend Liz along with her two flatmates. The group spend their nights at the Winchester, their favorite pub, drinking the nights away and not really doing anything. Shaun and Liz’s relationship hits the rocks when he’s not able to commit to her and break away from his best friend and his pub.

After a night full of drinking, Shaun wakes up ready to get Liz back and fix his life. Unfortunately, the city has become overrun by the living dead, or zombies. Shaun and Ed formulate a plan to save Shaun’s mother and step father, rescue Liz and her friends, and hold out at the Winchester until everything blows over. Shawn and Ed rescue his mother and step father, then gather Liz and her friends before heading to the Winchester while taking out random zombies along the way.

As the film progresses it’s clear that Shaun is the leader of the group, and as much as he tries, his step father and mother are bitten by zombies. The group makes it to the Winchester to hold out, but tensions between Shaun and Liz’s flatmates makes things worse. David and Dianne also get bit by the zombies.

The final standoff between Shaun, Liz and Ed against the undead takes place at the Winchester, with the trio using an old rifle, booze, chairs and whatever else they can find to kill zombies. Ed gets bitten and uses himself to keep the zombies at bay while Shaun and Liz wait for rescue. Just as things look to be done, the military shows up and starts eliminating the undead. A few days later, Shaun has Liz back, they’re comfortable in their boring lives and Ed is locked up in the garden shack, playing Playstation 2.

Unfortunately, I’ve left just about all of the comedy from the rundown of the film, but I assure you Shaun of the Dead is one hilarious film. There’s plenty of nods to past zombie films, like Night of the Living Dead, and other hilarious moments (the record throwing scene, everything Nick Frost does in the film). The film has plenty of jump scares and plenty of comedy to match it. You can tell that the guys behind the film really knew their zombie films.

I love the characters in the film, each have their own personality and you can connect with at least one of them. Shaun is the guy that when pushed, can get the job done. We watch him grow from slacker to full on leader and that’s awesome. Ed is that friend that always relies on you, but never purposely does things to hurt people. Liz is the girl that’s perfect for you and pushes you to better yourself. David is the jealous douchebag and Dianne is girl that deserves better than David. These characters feel far more real then any others in zombie films and the movie is better for it.

The action is quick and the laughs keep the film flowing. You will not get bored here, there’s always something to wince or laugh at. The film looks great and the music is awesome, especially during the shootout scene at the pub. These guys knew how to balance out their comedy and gory effects.

Some will complain about the zombies and how they just walk, rather than run, but for me it’s all about how bad the threat is. I can take zombies running or walking, but if they’re running then there doesn’t need to be a lot of zombies. If the zombies are walking, then there needs to be a lot. Here the zombies walk because there are massive amounts of them all about. I also love that in the end, the Military comes through, eliminating the threat. The film doesn’t treat this as the end of the world, rather just a blip on the history books.

Acting: Simon Pegg does an outstanding job as Shaun. He’s funny, he’s smart and downright badass by the end of the film.

Nick Frost is great as Ed. Funny at all the right moments and really appears to be that guy, that one friend who means well but just fucks up all the time but you can’t stop being his friend.

Kate Ashfield was great as Liz. She’s hot as hell and funny to boot. Great combination.

Gore Factor: They didn’t skip on the red stuff here: a blood spurting impaling, a record in the face, another impaling, head shots, violent blunderings, nasty bites, innards ripped out and of course, someone get’s eaten alive.

Overall: Shaun of the Dead is a hilarious gory good zombie flick, one that you can watch over and over again. The actors, the pacing, the effects, it’s all great here. I can’t think of any reason why you shouldn’t watch it. It’s always a fun watch and the guys (Simon, Ed, Edgar) would keep it up with Hott Fuzz and The Worlds End.