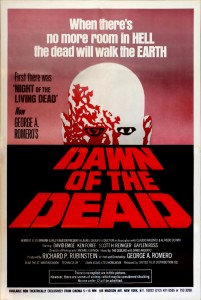 Written by: George A. Romero

Plot: Following an ever-growing epidemic of zombies that have risen from the dead, two Philadelphia SWAT team members, a traffic reporter, and his television-executive girlfriend seek refuge in a secluded shopping mall.

Review: When there’s no more room in hell, the dead will walk the earth.

Just when you thought it was safe to go outside, and you survived the Night of the Living Dead, you’ve gotta deal with Dawn of the Dead. This 1978 follow up by George Romero to his groundbreaking classic Night of the Living Dead ups the ante in every way, from production values to writing to effects. This baby has everything you could want in a horror movie.

To fully appreciate this movie you have to think back to a time (if you’re old enough) when shopping malls contained everything you could want in the world all under one roof. Those too young to know just how great shopping malls used to be will have to take our word for it – malls were, for a long time, the place to be.

Our heroes live in the mall, enjoying it’s resources and eventually have to defend it from a biker gang who looks to loot the place and finally zombies who are able to break in thanks to the gang. Up until this point, it’s pretty much fun and games as our heroes play arcade games, enjoy gourmet dinners, and live like kings. It just figures someone would have to come along and mess it all up.

George Romero was fairly smart setting this movie in a shopping mall, especially during the era of the film. Not only does it give our heroes a place to stay, but it also adds a sense of danger from people looking to loot the mall and brings in zombies because they still follow their old human instinct to go shopping. George Romero did look to make a statement about consumerism, and if you really buy into that stuff, than he definitely got the job done here. Personally, I think the mall setting it a great playground for the movie, and that’s all.

We still don’t know exactly what started the zombie plague, although it’s implied that the phenomenon was caused by cosmic radiation from a Venus space probe, but no concrete cause is ever found. I think this adds to the horror of everything as typically we know why something is happening so that fear of not knowing makes everything more scary.

The special effects are really great here, with Tom Savini bringing some of his best work to the film. This is before Friday the 13th or The Burning, both of which made Savini a household name. One criticism I have of the effects is they make all the zombies have a blue tint to their skin. It’s really odd, almost cheap looking. I expected them to be a shade of green but I digress, color doesn’t matter when a zombie is trying to bite your face off.

George did a great job keeping the scares up even after giving our heroes a lot of room to move around. Night of the Living Dead was scary not just because of the zombies, but because of the small confines the characters had to stay in and the tension it brought. Here, there’s more room and less people to deal with, but it’s still dangerous and scary.

Acting: Ken Foree is great as Peter, the ass-kicking SWAT team member who doesn’t mess around when it comes to killing the undead. Ken Foree would have more success in various horror movies down the line, which we’ll get to.

Gaylen Ross does a fine job as Francine, our lone female survivor. Francine is often the voice of reason, and eventually her character getting pregnant makes the viewer care about what happens to her.

Gore Factor: I don’t even know where to begin here. There’s so much red stuff, from people getting their limbs bitten to people being ripped apart. A screwdriver to the ear is sure to make you winch, along with a machete directly to the forehead, and oh yeah, there’s a head explosion. Blood and guts are everywhere in this film, I don’t suggest eating before or during the picture.

Nudity Factor: Nada, and I would have welcomed some with all the red stuff flowing, just to break up the gore for a few minutes.

Overall: George Romero continued his Dead movie franchise here with another scary installment. It had everything you could want, except for some boobage. From the gore to the setting, to the pacing (which was really good), Dawn of the Dead hits all the notes it needs to in being a very scary film. This is a must watch for any horror buff, and with so many editions available, there’s no reason not to see it.