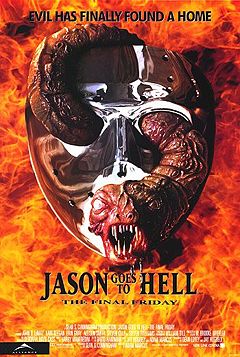 Plot: Jason Voorhees is back for one more (right) romp through Crystal Lake.

Review: This was the first Friday the 13th movie I was able to see in theaters. At the ripe age of eleven, I was ready to see the big guy on the big screen. Boy, was I let down.

The film picks up some time after Jason Takes Manhattan, with a busty brunette being stalked by Jason at Crystal Lake. There’s zero explanation for how he came back to life after being turned into a boy in the last film. Before Jason can catch the chick and polish her off, the FBI drops in, pelting Jason with machine gun fire and finally a bomb, blowing him to pieces. Then we get the opening credits.

Jason’s remains are then sent to a morgue, where the coroner conducting the autopsy becomes hypnotized by Jason’s heart and is compelled to eat it. This causes the coroner to be possessed by the demonic spirit of Jason. The possessed coroner now becomes Jason Voorhees, who then makes his way to Diana Kimble’s house. Steven Freeman attempts to protect her from Jason, but Diana is killed and Jason escapes. Steven is falsely accused and arrested and meets a mysterious person, Creighton Duke, in jail. Duke claims that only members of Jason’s bloodline can truly kill him for good. Therefore, if he transfers the creature into a member of his family, he will be “reborn” back to his old form. The only living relatives of Jason are his half-sister Diana, her daughter Jessica and her infant daughter Stephanie.

Sleazy news anchor Robert Campbell, who is dating Jessica, steals Diana’s body then plants it in the Voorhees house for an upcoming investigative show to boost his ratings. Jason bursts in and possesses Robert before leaving with Steven in pursuit. Jessica, who is unaware that her boyfriend is the undead killer, is attacked by him so he can be reborn through her but is disrupted by Steven, who manages to stop him and gets Jessica into a car. He runs over Jason and explains the situation, but Jessica does not believe him and throws him out of the car and goes to the police. Steven turns himself into the police and arrives at the station as Jason does; he frees himself again to protect Jessica, who now realizes the truth. In the chaos, Duke makes his escape. The two discover a note from Duke telling them that he has Stephanie and orders Jessica to meet him at the Voorhees house alone.

Jessica meets Duke at the Voorhees house. Duke throws her a knife and when she catches it, the knife turns into a mystical dagger. Jason tries to possess Stephanie, but Steven arrives and severs his neck with a machete. A creature crawls out of his neck, and makes its way to the basement, where Diana’s body was planted. Jason explodes through the floor in his original body. As Jessica attempts to retrieve the dagger, the two men alternately fight with Jason. Duke is killed by Jason and the fight between Jason and Steven ends up outside in the yard. As Jason prepares to finish him, Jessica jumps behind him and stabs him in the chest. This causes Jason to be dragged to Hell. The film ends with Freddy Krueger’s glove bursting out of the ground and grabbing Jason’s mask under as he laughs, setting up the events of Freddy vs. Jason.

Reading over the events of the film is far less painful than actually watching it. Let’s start off with the biggest problem the movie has: Jason is nowhere to be seen. Well, Jason as we know him is nowhere to be seen. Instead we get him jumping bodies and he doesn’t show up until the end. Unlike the first Friday the 13th, or A New Beginning, this is clearly Jason just jumping from body to body. The worst part of it is they didn’t even use his body jumping abilities for anything different. What Jason does in this film while in these other bodies, he could have done in his own without any problems. I’d also like to know how he went from being a boy at the end of the last film to being back to normal in this one.

The next issue is since when the hell can Jason Voorhees jump from body to body? And why the hell didn’t he do this years ago? I understand that you wanna do something different for the franchise after all this is the ninth installment of the series. But trying to evolve the mythos of Jason in this way was a huge mistake and just plain dumb. I can get over them introducing Jason having a family, though they were nowhere to be seen over the last eight films, that’s fine. Jumping from body to body? Nah, that’s just crap. There’s no reason to try and put an explanation behind how Jason does what he does since by part nine we already accept his character. The time to do this explanation was a few movies ago.

Another issue I have is gone is the great creepy movie score of the previous films. Gone are those creepy suspenseful tones and in their place, we get run of the mill music that wouldn’t scare anyone. At the very least, these last Friday films have had great music. Shame they had to switch things up here. Adam Marcus did an okay job directing as it never feels boring, but the film is never exciting either. By the end of the movie, you’re left wishing you could have at least seen old Jason slicing and dicing and not jumping bodies while dealing with magical knifes and hands from the ground. Oh and who the fuck is this Duke character? We’ve never met him and somehow, not only does he have a personal history with Jason, but he knows how to kill him too. Where has he been over the last fifteen years since this has been going on?

The only real good portion of the film is the last few seconds, which sees Jason’s mask getting grabbed by Freddy Kruger and dragged underground. Seeing this on the big screen made up for the crap movie (yes, I knew way back when it was crap) and seeing it today is still pretty cool. It’s a shame that it would be another decade before this match up would finally happen.

Acting: John LeMay was fine as Steven. He wasn’t the toughest guy in the film and oddly enough, he survived a fight with Jason.

Steven Williams chewed up his scenes as Duke. He’s over the top and almost a parody of a Clint Eastwood character.

Kane Hodder was okay as Jason. Again, I don’t see the fuss and here he was barely on the screen.

Gore Factor: We get an impaling (that rips a girl in half… ewwww), plenty of gun shots, stabbings, a lady gets her jaw punched in, burns, a guy gets his arm broken in the worst way, and a guy melts. Ewwww!

Nudity Factor: We get some boobs, butts and even a guy’s butt for the ladies. Plenty to see here.

Overall: This is easily the worst Friday the 13th film in the franchise. Jason barely has any screen time in his normal form, and quite frankly, trying to change the mythos of the character nine films in was plain dumb. The tease at the end of the film was probably the worst of all, as nothing would come of it for a decade. Check this out if there’s absolutely nothing on TV, including Child’s Play.