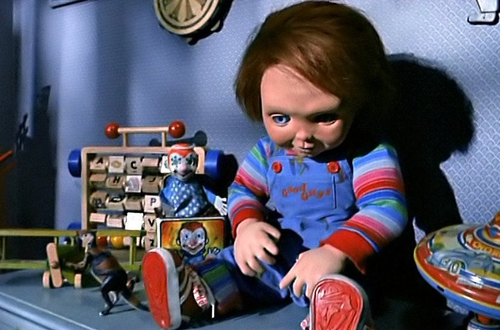 Plot: A single mother gives her son a beloved doll for his birthday, but later they find out that the doll is possessed with the soul of a serial killer, who tries to put his soul into the boy’s body in order to become human.

Review: Here we are, possibly the worst idea for a horror movie, with Redneck Zombies following close behind it. I remember seeing Child’s Play when it first hit VHS way back in the late 80s and being downright terrified of Chucky, and rightfully so – I was a child. As an adult, the Child’s Play movies have zero appeal, because it’s a small killer doll that can easily be dispatched of with one swift kick. I’m getting way ahead of myself here, first let’s talk about the plot for a moment.

Wanted fugitive/serial killer Charles Lee Ray, who’s on the brink of death, uses a Voodoo ritual to transfer his soul into a “Good Guy” doll. After being packaged up and sold as the Good Guy doll Chucky, Charles has only a few days to transfer his soul into the young boy that become his new owner. The reason why he has to take over the boy’s body, and not an adult, is due to the Voodoo curse having a clause in it’s contract. Chucky told Andy (Alex Vincent) who he really is, so it’s his body that Chucky now needs.

Then we have the mom from 7th Heaven (Catherine Hicks) and the great Chris Sarandon (from Fright Night awesomeness) trying to figure out who’s killing all these people and then attempt to stop Chucky once they find out. Wouldn’t ya know it, two grown adults, one being a cop no less, have a problem stopping a plastic doll that’s a foot and a change in height. What kinda crap is this?

I can get over the whole voodoo aspect of the film, and we all know horror movies are planted firmly in out of this world shit when it comes to plot (with a few exceptions), it’s just the choice behind who’s doing the killing that throws the entire film off course. Maybe if Charles had changed bodies a few times, from Chucky to someone else, before going after Andy, it would have worked better. Like I said, as a kid this scared the shit out of me, because I had giant toys like the Good Guy doll (remember the talking Teddy Ruxpin?…creepy!), but as an adult, Chucky is just outright stupid.

Even when Chucky has a weapon, like a knife or a bat, you can easily dispatch of him by say, walking through a door and closing it. It’s not like he can reach the handle, or you could get in your car and drive away. The ways of stopping Chucky are endless, in fact he’s the weakest horror movie character ever created, even weaker than Zombies – at least they have height and weight on their sides.

To director Tom Holland and Don Mancini’s credit, the movie doesn’t drag or become boring, regardless of how ridiculous the whole killer doll scenario is. The guys put some work into the film, and none of it feels cheap, from the music to the effects, everything looks good here. It’s a shame the entire production is hampered by the killer doll idea.

Acting: Catherine Hicks did a fine job as Andy’s mom, trying to protect her son while dealing with a killer doll chasing her. Chris Sarandon, an under rated actor, was cool as a cat playing Detective Norris, the only one who ends up believing Andy and his mom about the doll. Alex Vincent did a great job as Andy, the target of Chucky, and he would reprise the role in Child’s Play 2 (1990) and Curse of Chucky (2013). Brad Dourif does a good job as the voice of Chucky, spitting out those cliched one liners must have been a choir.

Gore Factor: Chucky slices some people open, but there’s nothing over the top here. The gore would amp up over the next four installments.

Nudity Factor: Nothing. No boobs, no butts, nothing. I would have welcomed some too, considering I’m watching a doll kill people.

Overall: This is near the bottom of the barrel in terms of horror movies to me. While the production overall looks good, and the writing cuts a good pace, the subject matter is too laughable to be taken seriously. The problem with the first three movies is that they’re supposed to be serious, and it wasn’t until Bride of Chucky where the writers firmly planted their tongue in cheek and addressed how stupid the idea of a killer doll is. I don’t suggest anyone watch Child’s Play, even out of curiosity, because you’ll just be sitting there wondering why they don’t drop kick the little shit out the window.