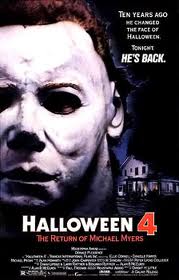 Plot: Ten years after his original massacre, the invalid Michael Myers awakens and returns to Haddonfield to kill his seven-year-old niece on Halloween.

Review: You’re talking about him as if he were a human being. That part of him died years ago.

A lot, and I do mean A LOT, of people hated Halloween 3: Season of the Witch. Personally, I liked that film, and I don’t hold it’s Halloween 3 title against it. However, if the series was to continue it was pretty clear that doing another film not based around Michael Myers would be a mistake, so the Shape makes his return in Halloween 4: The Return of Michael Myers.

The film starts up by letting us know that somehow, some way Michael Myers and Dr. Loomis survived the explosion from Halloween 2, you know, the one that should have cooked them both to a crisp. Myers, just before Halloween, is getting transported between sanitariums and escapes. Of course, he’s able to learn about his eight year old niece who’s still alive and living in Haddonfield shortly before he kills the EMTs and escapes. Dr. Loomis gets wind of Myers getting away from the sanitarium, and gives chase to Haddenfield.

We then meet Jamie Lloyd, Micheal’s niece and daughter of Laurie Strode (who died in a car accident between Halloween 2 and Halloween 4). She has nightmares about Michael Myers coming after her, and the kids at school taunt her that her uncle is the boogeyman. We also met Rachel, our heroine of the film. She’s Jamie’s older foster-sister, and is forced to take her out trick or treating that night. Loomis makes his way to town, finds new Sheriff Meeker (Brackett retired after the events of Halloween 2) and starts searching for Jamie.

Myers tracks Jamie down, systematically killing everyone he comes into contact with. Rachel and Jamie are the last alive and end up running/fighting with Michael. The film comes to a climax with Sheriff Meeker and Dr. Loomis, along with a host of townspeople, mow down Michael with shotguns and rifles, sending him to the bottom of a well to die. The film ends with Jamie attacking her foster-mother, dressed in the same Halloween outfit Michael wore as a kid when he attacked and killed his sister.

Okay, let’s talk about all the good things the film has going for it. One is Dwight Little did a great job with the pacing and look of the film. The film isn’t boring at any time, and the opening scenes are creepy as shit even though nothing is happening at all! The banter from Dr. Loomis to various characters about Michael Myers being more than a man, being something evil, just adds to the overall legend of the character, making him more than just a random killer in a mask.

I like the new target of Jamie Lloyd, it’s nice that they tried to tie and first two films into this one, giving Michael a reason to get up and start killing again. Rachel is a great character, and really does a great job going against Michael with Sheriff Meeker and Dr. Loomis giving their support when they can. I love the kills, especially the way Brody gets it, OUCH! The climax is satisfying I think, watching Michael just getting blown to smithereens by shotgun fire is what everyone wants to see happen.

The music is again, top-notch here. The iconic Halloween score is here and it’s as creepy as ever. the gore in the film is straight forward and I don’t think it’s too over the top. It’s Halloween, not Friday the 13th, they didn’t need a bunch of gore to sell this.

Now, let’s talk about some of the bad. First off, it’s pretty damn convenient that Michael Myers is getting transported at all, much less a day before Halloween, at night, in the pouring rain. The excuse given is that he’s a Federal patient and is subject to Federal law, but quite frankly a guy like this, still kept alive, should have been under far more lock and key then he was. He wasn’t even strapped down to the gurney when they moved him!

Also, how in the hell did Michael and Dr. Loomis survive that explosion from part two? Okay, I get it, you want Michael back, but Dr. Loomis, he shouldn’t be here. Hey, I love the character too, but really there’s no freaking way he should have survived. I also hate how they gloss over Laurie Strode dying, it’s so random the way it was done. I do like that they included it, but they barely make mention of it and if you don’t pay attention, you’ll miss it.

As much as I like the climax with everyone gunning down Michael, the finish of the film with Jamie attacking her foster-mother was just unneeded. They wanted to end on a shocking finish, but they could have easily done something with Michael instead of Jamie. When you consider they don’t in any way follow up this attack in the next film, it’s really just a waste of time.

Acting: Donald Pleasance, the great DP as usual does an outstanding job as Dr. Loomis. While he character shouldn’t be here, he adds so much depth to the film and the lore of Michael Myers. I wish he had more to do in the film and the climax, but we gotta take what we can get.

Danielle Harris was great as Jamie Lloyd. I had a huge crush on her as a kid, so seeing her in danger really made the film for me as a kid. Now when I watch, I think she did a great job with her character, never trying to get tough and always staying that scared character. She was a perfect target.

Ellie Cornell did a great job as Rachel. She starts off snobby and unlikable, but by the time shit hits the fan she gets tough and awesome. Running down Michael in the truck at the end is on of my favorite moments in the series.

George P. Wilbur does a fine job as Michael Myers. Really there was little movement for him to do with the character like the first two films, so I don’t believe he was able to put his own stamp on the movements. Still, Michael Myers is scary as shit, exactly how he should be.

Gore Factor: There’s not too much red stuff here, but I think we get some cool kills. There’s a girl getting impaled with a shotgun, a thumb through a forehead, some crushed skulls, and a neat throat ripping off gag. Ewwww.

Nudity Factor: Kathleen Kinmont gives us a side boob shot and graces us with a wonderful g-string butt shot. She’s great.

Overall: Halloween 4: The Return of Michael Myers does what it’s supposed to do, hell it does what’s in the title, brings old Mickey back and lets him do his thing. I like that they bridged the first two films to this one, but really Dr. Loomis shouldn’t be here and the final image is wasted in the next film. Still, this is a great entry in the Halloween franchise, and would start the second “trilogy” for the hardcore Halloween fans.