One part history lesson, one part critical analysis, this series will examine the life and times of Captain America in an attempt to derive some deeper meaning contributing to the character’s lasting appeal. Relive the entire series in Part 1, Part 2, Part 3, and Part 4. Here, we reach the end of our journey.

In writing this series, I set out to prove — as much to myself as to a wider audience — that Captain America was more than a one-note novelty gimmick. One could point to his iconic nature as an indicator of worth, but plenty of comics characters can be said to be “iconic.” The term has become diluted past the point of any meaningful application. It imparts a sense of grandeur, yes, but also a certain homogeneity. When presented with a line-up of such characters, this quality creates a false interchangeability, doing them a real disservice. True, I admire characters like Superman, Spider-Man, Batman, Wonder Woman, and the Hulk, in one way or another. I grew up with them. I also grew up with Captain America. And no other character from the foundations of my fandom was as personally important. I had to know what set Cap apart.

We take comfort in our icons being evergreen. Faithful, dependable, constants. What I realized charting the history of Captain America is that in the same way I grew up with the character, so too did he grow up with me. And, by extension, with the culture (lovingly made possible by comics’ sliding timeline). Revisiting all of these back-issues I read growing up (most of which were published before I was born) revealed a guy learning about the world and finding his way in it at the same time as me. For a character so very established (Superman has him only by a couple of years), this was certainly unexpected. Growth and change seem counter-intuitive any time the term “iconic” enters the conversation. When we dig down deep into Captain America as a concept, though, we find maturation and progress as core tenets of the story. 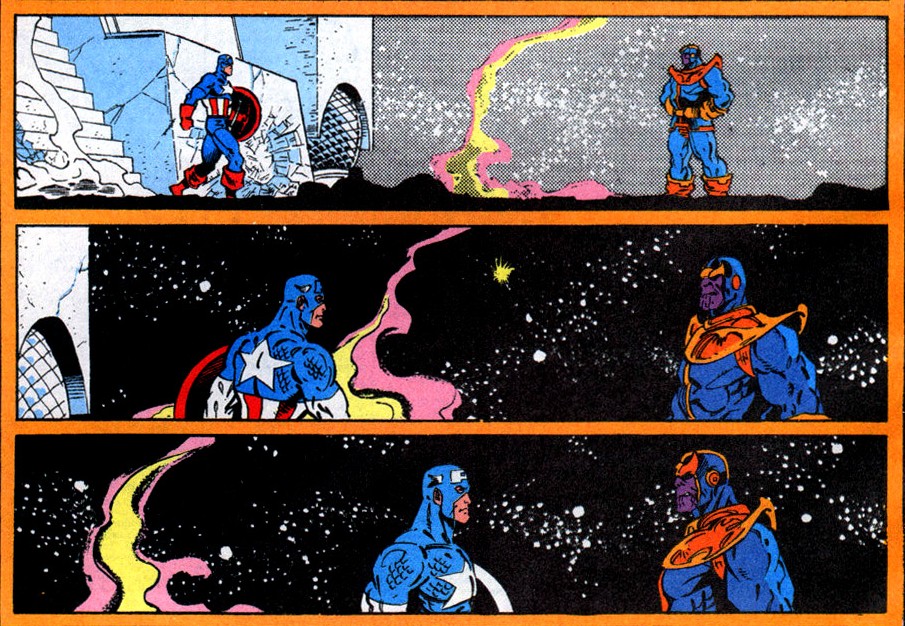 As we arrive at our destination, the pattern is revealed. What’s most compelling is the surprising versatility of Steve Rogers as a character; indeed, like any other iconic cultural cornerstone, he is essentially immune from any significant deviation in his default characterization today. Unlike his peers, however, this feature makes him uniquely suited to function as a kind of social litmus test. To participate in and comment on the cultural discourse in a way that other characters can only react to. America may provide the cross-section, but this need not be confined to any one nationality or sensibility. 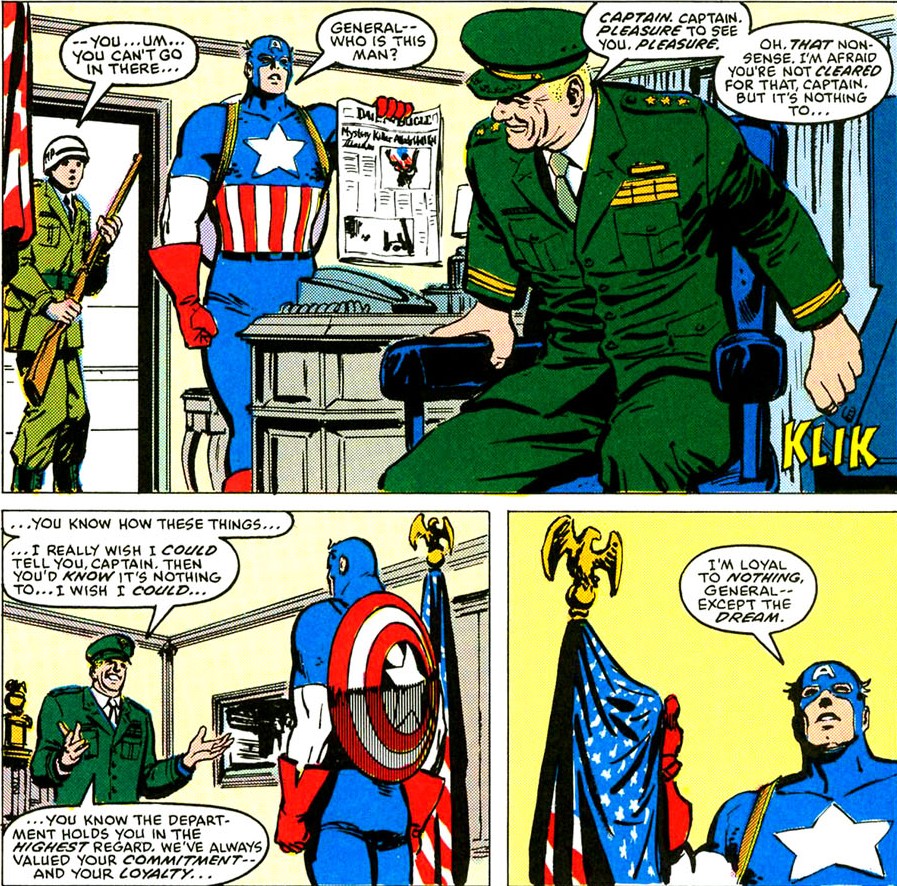 Through the groundbreaking work done by some of the finest talents in comics over the course of nearly 75 years, Steve Rogers has emerged as a man, not of a country, nor of the moment, but of universal values. Once inspired to measure up to a standard set by the nation whose colors he bears, now, the nation could do well to measure up to the standard set by him. As individuals, we sometimes need an agent of change to show us the way through the morass of mixed messages and white noise. Unfashionable, yes, but pure, incorruptible. Feeling frustrated by socioeconomic forces seemingly beyond your control? Want to know how the zeitgeist is faring? Try on some Captain America comics for a sense of perspective.

This is the lesson, then, in a macro sense. One does not have to reside in the United States for it to ring true. While the international marketability of Captain America presents a quandary, I implore any reader to look past the baggage to what the character symbolizes. His name and uniform are an ode to tradition, a reminder of where he’s been, but his motivation today is that of perpetually looking forward. To move beyond one’s limitations, physically, mentally, and geographically. To always find a way. He is the reminder that however hard you work, you can work harder. But whatever your name, whatever your clothes, whoever you are — it is enough. 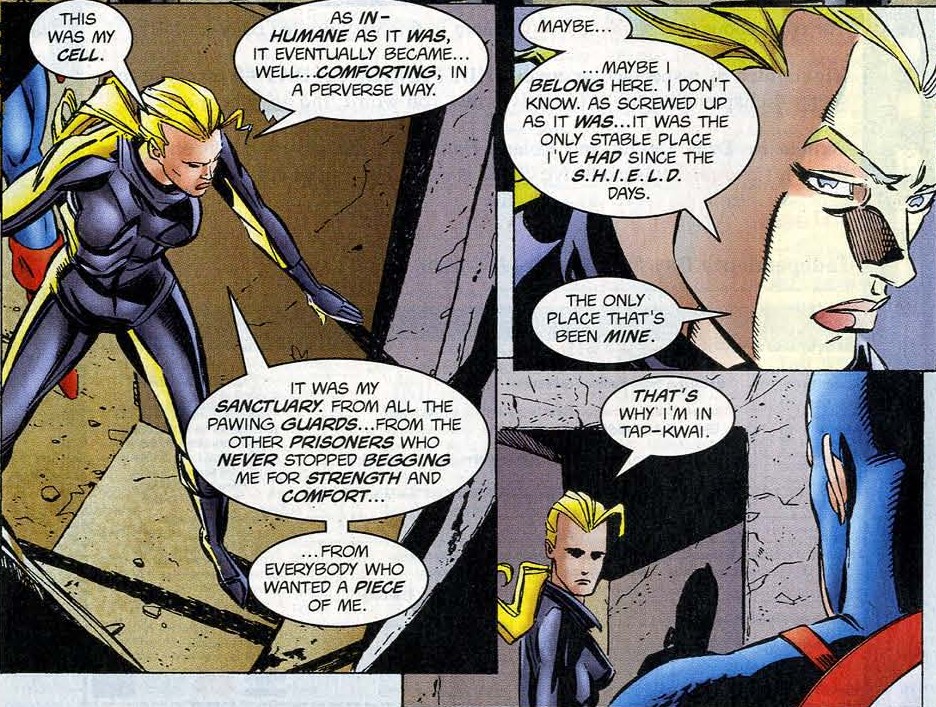 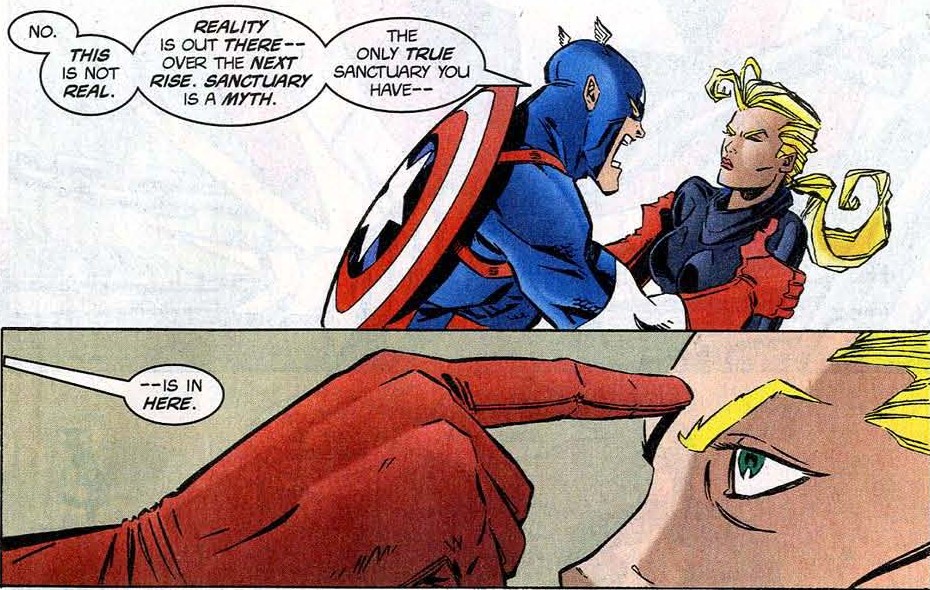 More than being the embodiment of the American superhero, Cap is the quintessential Marvel hero. Salt of the earth and obviously a little provincial in his roots, yet always striving to be BIGGER than his surface trappings; BETTER than world he was born into, whilst honoring his own history all the same. Where Spider-Man can be looked to as the personification of Marvel’s heart, Captain America is its lifelong ambassador.

Bridging the gap between one’s critical faculties and the gleam of nostalgic recollection is often a fool’s errand leading to disappointment. In my case, I was able to satisfy the hope that my lifelong support of Captain America would hold up under scrutiny. This is all subjective, of course, and it would be immodest of me to suggest that you now share the same connection. But if this series did help illuminate the path for you: welcome to the club. Coffee and apple pie are served in the back.