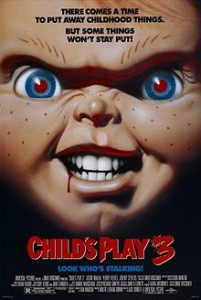 Plot: Chucky, the doll possessed by a serial killer, returns for revenge against Andy, the young boy that defeated him and has since become an adult.

I can’t believe they used that line for the poster. Seriously, it’s bad, very bad. Anyway, we’re back with Child’s Play 3, a film I remember enjoying as a kid and I found to be not as bad upon viewing as an adult. Still, we’re talking about Chucky here and you guys know my disdain for the character.

It’s been eight years since the events of Child’s Play 2, and Play Pals, the company behind the Good Guy dolls, are recovering from Chucky’s murder spree. The company decides to release a new line of Good Guy dolls and wouldn’t ya know it, they somehow manage to recycle Chucky’s remains into a new doll. Apparently the company is serious about recycling because this happened in the last movie too.

Chucky is soon enough back on his feet and searching for Andy, the kid he was trying to possess in the first two films. Andy has grown up and been sent to Military school. Chucky of course finds this out easily, and heads off to the school. Upon arriving, Chucky befriends a young cadet named Tyler and uses him to get around the school. He kills various people along the way to track down Andy, hoping to take over his body.

Eventually, Chucky is able turn a war games exercise into a bloody war with Andy and his girlfriend De Silva, chasing him down to a local fair. Chucky has now decided to take over Tyler’s body, but Andy and De Silva are able to put an end to him by dropping him into a large industrial fan. They all walk away happily ever after.

So let’s talk about the good in the film. First off, I love the setting. The Military school opens up a range of possibilities and most of them are reached here. You have the kids that don’t fit in (Andy, De Silva) and the overbearing jerks that are perfect for the place (Shelton, the barber). The war games sequence is especially fun, knowing that Chucky gave one side real bullets and other blanks makes the sequence work.

Chucky looks pretty good here. His facial expressions look better than the two previous films. The doll as a whole looks better as well, talking or not, they did a good job with this one. Considering they were making this immediately after Child’s Play 2 says a lot about how quickly they upgraded the puppet.

The film also cuts a good pace not really slowing down at any point. I never felt bored with the film, as it moved from one point to another without any issues. I liked the war games sequence and watching Andy navigate his way around the school and the deal with Chucky worked. I liked Andy being older and not just some kid that couldn’t handle himself. This time he wasn’t the one in danger and that’s fine with me.

Let’s talk about the problems with the film and there are a few. My first question is how is Andy in this Military school? This isn’t one of those Military schools that’s in a juvenile hall. It’s a full on you wear a uniform and shine your shoes kinda school. It’s the kind of school my mom used to threaten to send me to when I was a kid and was too dumb to realize she couldn’t afford it and just wanted me to clean my room without talking back to her. How is Andy affording this? Is the state paying for this? His mom went crazy, so it’s not like she’s funneling money to him. How did he get to this outstanding school with no money?

My next question is, how the fuck is Play Pals still in business? Seriously, you’ve had your doll linked to numerous murders, with plenty of witnesses, with some deaths happening at your own production plant, but you’re still in business? WHAT? To top it off, not only are you still in business, but after seven years, you still manage to use the same fucking killer doll to make new ones?! What the hell man!

Of course, this is where I complain about Chucky being the killer, and yes, I’m still complaining about that. It’s a doll for crying out loud! How hard can it be to deal with that? Seriously now Andy, you’re getting older, how can you not handle this issue? I’ll give Chucky a pass when he’s got a gun to shoot, but other than that, Chucky is no match for a boot upside his head.

Lastly, why did Chucky track down Andy and then at the end decide to possess Tyler? Talk about a major screw up here. If Chucky could have taken over Tyler’s body anytime he wanted, he should have done it earlier in the film. In fact, why risk heading to where Andy – the one person who knows what you really are and can stop you – just to change your mind and take over Tyler’s body?

The fact that this film was out less than a year after the second one shows they had little ideas to go on. The effects for Chucky are better and the setting is great with some solid characters. However, there’s too may issues with the story, and I know, it’s about a killer doll, but you gotta draw the line somewhere.

Acting: Justin Whalin does a fine job as Andy all grown up, or at least as a teenager. He’s not super tough but he’s not a pushover either.

Jeremy Sylvers plays Tyler well, the bright-eyed kid who’s fooled by Chucky. He’s important to the story and the kid pulled the role off well.

Travis Fine is hilarious as Shelton, the prick soldier wannabe. He, of course, spouts the famous “this is my rifle” line, which is aces.

Brad Dourif does his job as the voice of Chucky. He knows the role and does it perfectly.

Gore Factor: We get a throat cut, Chucky loses half of his face, and there’s a little red stuff during the war games. Not much else to see here.

Nudity Factor: You’d think we’d get some boobage, but alas there was none.

Overall: Even with the holes in the story, I still find this to be the best Child’s Play film in the series. Andy isn’t the would be victim who’s trying to convince people Chucky is real, and Chucky looks a lot better this time around. The pacing is good and the effects are nice, so at least you won’t get bored watching it.