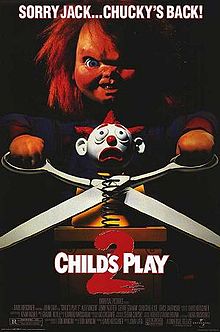 Plot: Chucky’s back as the doll possessed by the soul of a serial killer, butchering all who stand in his way of possessing the body of a boy.

Review: And we’re back to the Child’s Play series, not exactly my favorite. However, let’s do this right.

So it’s been two years since the events of the first film have happened, and Andy, the child that Chucky was after in the first film, is now in a foster home due to his mother going crazy. Apparently no one believed her or the detective who witnessed everything.

Meanwhile the Play Pals company, the people behind the Good Guy dolls, try to rebuild their company after all the bad PR about their doll killing people (remember this). Somehow they reuse the Chucky doll from the first film to make a new one and of course Chucky comes back to life and starts killing again.

Soon enough, he’s after Andy and killing anyone that gets in his way. The movie culminates in a showdown between Chucky and Andy and Andy’s foster-sister at a Good Guy doll factory, with Chucky finally losing his head.

Child’s Play 2, to its credit, does a good job of following up the first film in terms of giving us more Chucky time. He’s all over the place here, landing kills and spouting one liners. The problem from the first film remains however, this is a fucking doll, plain and simple. He has no supernatural powers like super strength or speed, so it’s not like he’s got something to help make up for the fact that he’s about a foot tall and keep up with what a normal person can do. A swift fucking kick or a heavy book to his head would stop him.

One thing I’ve never understood since the first time I saw the film was how the company Play Pals could have negative PR from everything and yet no one believes Andy when he tells them about Chucky? I mean, a killer doll surely would have made the news and even though people would be skeptical I’m sure people wouldn’t just dismiss Andy when he tries to warn them. Also, how in the hell did Play Pals get the burnt up Chucky doll back? That’s evidence in a few murder cases, not something the police would throw away after the first film ended.

The victims here are really ridiculous, and it’s hard to figure out why they got killed by a doll. I know that horror movies revolve around people being stupid, like teenagers who go outside because they heard a noise, but at least those kills are believable. A guy in a hockey mask with an axe is going to kill you, that makes sense. A little doll with a ruler shouldn’t be able to beat you to death. I’m just saying.

The director this time around, John Lafia, was a writer on the first film. In spite of my complaints, he did a fine job here with the build up to the kills and pacing of the film. The effects of the kills look good and I enjoyed the climax of the film at the doll factory, even though I don’t care for Chucky at all.

Acting: Alex Vincent did a fine job as Andy. Nothing sticks out about his performance but it’s hard expect it with the material. I do like that he came back to play Andy, it helps connect the two films together.

Gerrit Graham is a great character actor, and is easily unlikable (I don’t know if that’s good or bad). He did a great job as Phil, the foster-father of Alex and Kyle.

Brad Dourif had little to do with Chucky besides read off his lines, and most of them were extremely corny.

Christine Elise, one of my many crushes as a kid (thanks 90210) was great as Kyle. She was hot throughout the movie and then kicked Chucky’s ass.

Gore Factor: Plenty of kills here: electrocution, smothering, death by ruler (yeah I’m not sure about that one either), neck breaking, and an eye gouge ya gotta see to believe.

Nudity Factor: We get to see a stripped down Chucky…..that’s it.

Overall: Child’s Play 2 is barely a step up from the first film. I didn’t miss Andy’s mom hogging up the screen time but it would have been nice if had given her story more than just her being committed. The story here is basically the first film all over again, with the characters being just as dumb and the kills ranging from okay to outlandish. Watch it for Christine Elise and forget the plot.