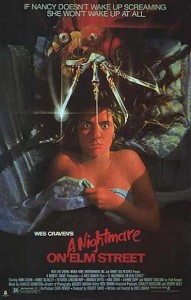 Plot: In the fictional Midwestern town of Springwood, Ohio, several teenagers who are stalked and killed in their dreams by Freddy Krueger. The teenagers are unaware of the cause of this strange phenomenon, but their parents hold a dark secret from long ago. With her friends dropping like flies around her, can Nancy stop Freddy once and for all?

Review: The house that Freddy built.

It’s hard for me to review the Nightmare on Elm Street series, because as I’ve gotten older my love for Freddy has dropped very low, but I attribute this to the series getting more ridiculous as the years went by. Today we’re looking at the first film, which takes everything very seriously, as it should. The others we’ll get to in due time.

As a kid I enjoyed the Nightmare series, Freddy Krueger was an imposing figure who could get at you only in your dreams. So you can imagine as a child it was hard to go to sleep after watching one of these. For my money, that’s the best part of the character Freddy Krueger, he only attacks when you are at your most vulnerable.

Nancy, our leading lady, whose boyfriend and friends are targeted and eventually killed by Freddy Krueger, is the only one who believes Freddy is real. As the bodies continue to hit the floor, Nancy decides she’s got to take on Freddy once and for all and put an end to his rampage. She’s ingenious with her tactic of pulling him into the real world and setting traps for him. It’s like a sadistic version of Home Alone.

Wes Craven, who wrote and directed the first picture (and who would return for New Nightmare years later), cuts a great pace with this film. There are a few moments where things slow down, but those moments are there to give you a moment to breathe and analyze all that’s happened. The sets and look of the film are dark enough to keep you in the mood, and you never really feel safe.

The music is haunting as well and while the music isn’t as iconic as say Halloween or Friday the 13th, it still does a great job of setting the mood. The age-old nursery rhyme “One, Two, Buckle My Shoe” gets a creepy remix here, which you’ll never forget after hearing it the first time.

The special effects here are outstanding for their time and still look good today. The kills are fresh, and Freddy is disgusting to look at, even if we can barely see him. My only real complaint with Freddy is that he talked too much. During the era of the slashers who never talked, it was odd to have the killer taunting the victims, and while some enjoy Freddy and his one-liners, he almost moves from being a scary monster to a stand-up comedian. His glove with the razors on the end is iconic now, and back in the day was terrifying to imagine being attacked with. Also, who could forget the bathtub scene? It’s iconic as well.

New Line Cinema, the company behind A Nightmare On Elm Street, is pretty much here today because of Freddy Krueger. They were struggling to stay afloat in the mid 80s, and then A Nightmare on Elm Street came along and pretty much saved the day for them. The franchise was New Line’s first commercially successful series after a devastating financial slump. The low-budget flick had a production cost of $1.8M and grossed over $25.5M at the US box office.

Acting: Heather Langenkamp did her job as Nancy well. She’s cute when she needs to be and tough when it’s time. She embodies the girl next door character perfectly.

John Saxon does a great job as Nancy’s father, also a police officer. He chews up the scenery when he’s on the screen and brings a sense of seriousness to the film. You may remember John Saxon from Enter the Dragon, as he fought alongside Bruce Lee in that picture.

Robert Englund is Freddy Krueger. He plays the man with razors on his hand perfectly. Creepy when he needed to be, and crazy the rest of the time. Even with all the makeup and effects, without Englund embracing the role so well, it wouldn’t have worked.

Johnny Depp was an unknown at the time he was cast, and would eventually gain popularity with the awesome 21 Jumpstreet series. Here, he’s cannon fodder for Freddy, and dies in the most creative way.

Gore Factor: There should be enough to satisfy your palate here. There’s a girl who gets sliced to pieces leaving the red stuff on the walls and ceiling, a hanging, Johnny Depp getting sucked into his bed with his blood and guts then exploding all over the wall, Freddy gets set on fire and we get Nancy’s mom sucked through a small window.

Nudity Factor: The ladies get a young Johnny Depp…that’s all.

Overall: While Freddy’s talking can hurt some of the horror and suspense of the film, the way he slices and dices will keep people on the edge of their seats with their eyes covered. It’s hard to recommend the rest of the series, but the first one is a must watch for a horror fan. Think of it as Horror 101.