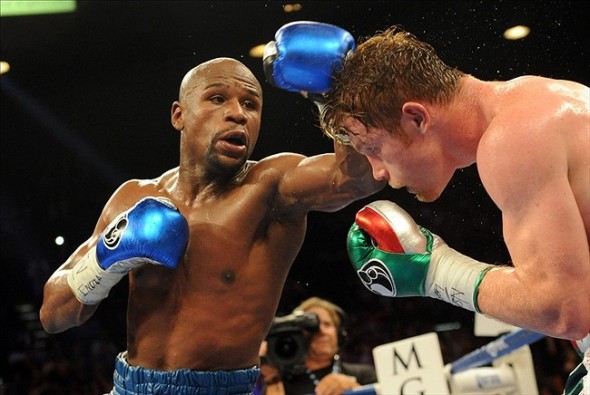 For boxing fans around the world, September 14th had been circled on the calendar for months.  Floyd “Money” Mayweather, boxing’s pound-for-pound king would be squaring off with young gun Saul “Canelo” Alvarez for the 154 lb. championship of the world.  Would Mayweather’s experience, hand speed, and unparalleled defensive wizardry carry him to yet another victory? Or would Alvarez be able to use his advantages in age, size, and power to hand Mayweather his very elusive first professional defeat?  Most experts considered Alvarez to be a legitimate threat to Floyd and this was evidenced in Las Vegas as the betting odds were the narrowest since Floyd’s fight with Oscar De La Hoya over six years ago.  This writer’s feeling was that Floyd would have to win a “clean” eight rounds in order to ensure a victory on the scorecards against the wildly popular Alvarez on Mexican Independence Day weekend.  Here is how it went down:

The MGM Grand crowd was in a frenzy, no doubt helped by the all-action co-main event where Danny Garcia retained his 140 lb. crown against the hard-hitting Argentinian Lucas Matthyse, as Canelo made his way to the ring.  The ginger haired Mexican did not seem in awe of the moment as many of Mayweather’s past foes have.  He was calm, focused, and clearly feeding off the energy of the very pro-Alvarez crowd.  Mayweather made his always anticipated ring entrance next.  Always the showman, “Money” was escorted to the ring by recording superstars Justin Bieber and Lil’ Wayne.  As Wayne spit lyrics next to him, Floyd was the picture of calm and confidence.  He has been here many times before and relishes the spotlight.   It was time for the world to see who would be “The One”!

From the opening bell, Mayweather owned the bout.   Alvarez, as many others before him, found Mayweather extremely difficult to find.  Floyd has mastered the art of “hit and don’t be hit”.  He peppered Alvarez with jabs and straight right hands that the youngster couldn’t counter.  By the fourth round it became clear that Alvarez had his work cut out for him.    Frustration began to set in as Alvarez hit Floyd intentionally below the belt.  The crowd was silenced for long stretches as Floyd exerted his technical dominance.  By the late rounds, even the most ardent Alvarez supporters would admit that he needed a hail mary knockout punch to win the fight.  It never came and Mayweather cruised through the final rounds on his way to what seemed to be a clear unanimous decision.  I scored the fight 119-109 in favor of Floyd, only giving Alvarez the 11th round.  This is boxing, though, so there is always the possibility of drama with the scorecards.  The crowd reacted with stunned silence as Jimmy Lennon, Jr. announced a MAJORITY decision.  The scores were 117-111 and 116-112 for Mayweather and an unconscionable 114-114 draw turned in by the immortal C.J. Ross.  For those who don’t remember, Ross was one of the judges who had Bradley beating Pacquiao.  She should have her judges license revoked immediately.  With that said, the judges come to the correct result and Floyd “Money” Mayweather is the new 154 lb. champion of the world.

The natural question is who should Floyd take on next? If a younger, undefeated fighter who outweighed him by fifteen pounds on fight night can not even be competitive, who can be?  The natural candidate would be Garcia.  He is the true 140 lb champion and a versatile, tough competitor.  Also, the thought of Angel Garcia and Floyd Mayweather Sr. being prominently involved in a promotion together is admittedly quite appealing.  The downside is that he will enter as at least a 10:1 underdog and poses no real threat to Floyd.  I don’t care what the odds are, the “Cowboy” will be tuning in.  Floyd is truly a master of his craft at his absolute peak.  While I may not appreciate his antics or his jail stints, as a boxing fan I am in awe of his skills.  The man makes the best fighters in the world look like glorified heavy bags.  He is truly “Money”.