Nick: After yet another delay, the Hard-Traveling Fanboys are back! You might say at this point that we’re the Jim Lee of comic book commentary, minus the stardom, success and talent, of course.

Greg: I’d like to start this column by apologizing to you, both our loyal and new readers, for our lengthy absence of late. Nick went on a deep-sea fishing expedition in the arctic, and I’ve had to spend a great deal of time preparing for my role as John Denver in an upcoming teleplay on the life of Gerald Ford. As you can imagine, our time has been scarce.

One thing we did find time to do, however, was to gather with a group of friends and play something more unique than you might imagine — an original superhero-based board game.

Nick: It’s truly been an exciting time in the lives of your favorite fanboys. And luckily for you, one of the more exciting aspects was finding time to play this game. (It’d be funny if it weren’t true.) What game, you ask? The game is Justice League: Axis of Villains, a strategy-based board game. 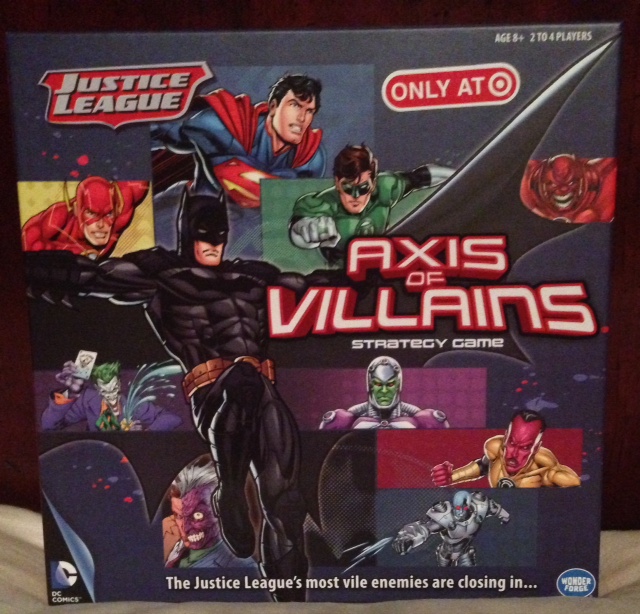 Greg: In addition to the official DC Comics seal of approval, numerous superheroes and villains from the DCU, and a spiffy box, the game also has a kind of terrible, generic name, carrying on in the great tradition of licensed board games.

Well, there is a tradition of licensed board games, but not really like this. This is an original game, a far cry from Star Wars Monopoly or Batman Connect Four or whatever.

Nick: And of course the packaging and Justice League alone was more than enough to draw our interest. But the great mystery remained. What would be inside the box when we opened it? How would the game work? Would it completely suck?

Greg: And just how convoluted could it be?

Nick: Well, the game turned out to be unlike any other board game I’ve played in the past. The board is an octagon, divided equally into 8 sectors with 8 spaces in each sector. In the center, there is the League’s Watchtower satellite. The goal of the game, as simply as I can state it, is to keep the villain pieces from traveling through the sectors to the Watchtower.

Greg: Now, we should mention that while this game could be played alone, it would likely be quite boring to do so. However, it can only sustain four players (at least without modifications, which we’ll touch upon later). We played with two of our friends, which I’d highly recommend. The more players, the more strategy, challenge and fun.

Nick: It can only sustain four players because only heroes are playable, and only four heroes are included: Batman, Superman, Green Lantern and Flash. The game also includes five character-specific villains for each hero, as well as four “Ultra” villains — Darkseid, Black Adam, Amazo and Deathstroke.

Greg: Now, the game works not entirely unlike some of the strategy or tabletop games some of you have probably played before. I myself have not played those games, so the idea of attack and defense spells and the give-and-take involved was a bit foreign to me.

As Nick just mentioned, each player controls a hero, which means something very important that it took us a while to fully grasp — this is a co-op board game.

Nick: Yes, villains move around the board based on rolls of the dice, with the heroes attempting to defeat them in combat before they reach the watchtower. Each villain has a power rating, indicating the total number of points it will take to defeat that villain and move them off the board. Villain ratings range from 7 to 21, with different heroes having different bonuses to use at different times and against different villains.

If that sounds convoluted and overwhelming, it kind of is at first.

Greg: This definitely isn’t the game to break out if you’re looking for a quick and easy game to kill an hour or so. The rule explanation process alone takes quite a while. We consider ourselves reasonably intelligent, but there was still some confusion throughout that process among the four of us.

Nick: And confusion continued throughout most of the first game. You see, as Greg alluded to earlier, the concept of a board game where the objective is to work together rather than against each other was foreign to each of us. No one player can win without the other players, and we quickly found that out. Our first game ended as the villains reached the Watchtower, thus destroying it and bringing an end to the game.

Greg: And, frankly, it didn’t take very long for us to lose. It felt a little like Tom Brady must have felt last weekend while being repeatedly sacked by the great Cameron Wake.

But seriously … an hour or so into the game, to say that we hated it would be an understatement. We were absolutely furious. Many profanities were hurled. Cups were knocked over. Gods were questioned. It seemed we were well on our way to doling out a bitter, negative review for Axis of Villains.

Nick: But, stubbornness had also set in. We weren’t going to stop playing until we achieved victory. So, we set up the game again and began anew. But out of our frustration came a determination to win at any costs, thus teamwork came much easier the second tie around.

Greg: And, amidst the carnage, something incredible began to happen. Like the Grinch’s heart growing three sizes, a fondness started to build for this strange little game.

Against our own wills, we found ourselves enjoying our collective battle against both the villains and the (in our eyes at the time) evil rules established for the game.

Nick: Part of it was we finally came to appreciate the strategy of the game. Each hero has two unique powers that can only be used in certain situations. Learning when and how to use those powers and pair them with the powers of another hero is essential to achieving victory. Superman, for example, can move himself and another hero to any space, enabling the two heroes to attack villains simultaneously, greatly increasing the chances of victory. However, each power requires a color-coded power card in order to use it. The colors correspond to different areas on the board, making it imperative to stockpile power cards corresponding to your heroes’ more powerful, um, powers.

Greg: And when we say things are “imperative” and “essential” to win, we mean it. This game is really hard to win. The odds are stacked in favor of the villains (though not enough to call the game unfair or unbalanced). You really have to put ego aside and thing long-term instead of short-term in order to achieve victory.

I feel like we’re not doing a good job of explaining exactly how the game is played, but it’s one of those that you kind of have to play a couple times to truly understand and get the hang of. Lucky for a lot of you, you can probably find a copy of the game for less than 10 bucks at your local Target.

Greg: Well, maybe. A friend and I went to my local Target and couldn’t find a copy of the game. Perhaps it was sold out. Perhaps not. In either event, it’s also available on Amazon.

One thing I really liked about the game was the division of villains. While you could pick nits with which villains were deemed “major” enemies (the most powerful), it was really cool to see each hero get his own rogues gallery in the game. And, really, it’s tough to argue with heavies like Darkseid and Black Adam.

Nick: And while we were mostly pleased with the villains that were included, I think we all agreed that we would have liked to have seen the game expanded to 6 to 8 players and included more heroes. Characters like Wonder Woman, Aquaman, Green Arrow, Shazam and Cyborg would all make sense and could have brought some added villains along with them.

Greg: The good news is that some enterprising folks have already created custom modifications to the game that add new characters and villains. These can be found and printed out at various locations online.

Heck, we spitballed our own ideas and easily filled the necessary villain roles for Wonder Woman and Aquaman.

Nick: Well, I think you guys already know the answer to this, but Greg, a final recommendation on Axis of Villains? Is it worth seeking out? I say it definitely is, especially if non-traditional, strategy-based board games are your bag.

Greg: Yes, absolutely, especially if you’re a comic book fan. It’s a great value at the price, as it can (eventually) produce countless hours of fun with friends. The feeling of satisfaction when we finally won a game … I’m only a little ashamed to admit we celebrated as if we’d won the Super Bowl.

You need to have patience, but your patience will be rewarded if you buy this one.

Nick: Well, that about does it for this month’s edition of Off the Page. Be sure to check back next week for Countdown.

Greg: That’s right. Of course, Nick’s still got some fishing obligations and I still have a little work to do on my acting role, so you never know when we may be delayed again.