Nick: Guess who’s back? That’s right, it’s the Hard-Traveling Fanboys, here to go Off the Page to take a look at a very….

No, I can’t do it. I can’t say very special or any other word that might convey any kind of a positive meaning. That’s because this week, Greg and I subjected ourselves to the worst thing either of us have seen since back when we reviewed the legendarily bad Ninja Turtles: The Next Mutation.

I’m talking about the worst animated Marvel offering I’ve seen. I’m talking about Hulk and the Agents of S.M.A.S.H., hereto called simply Smash because that damn acronym is stupid, pointless and annoying as hell to type. 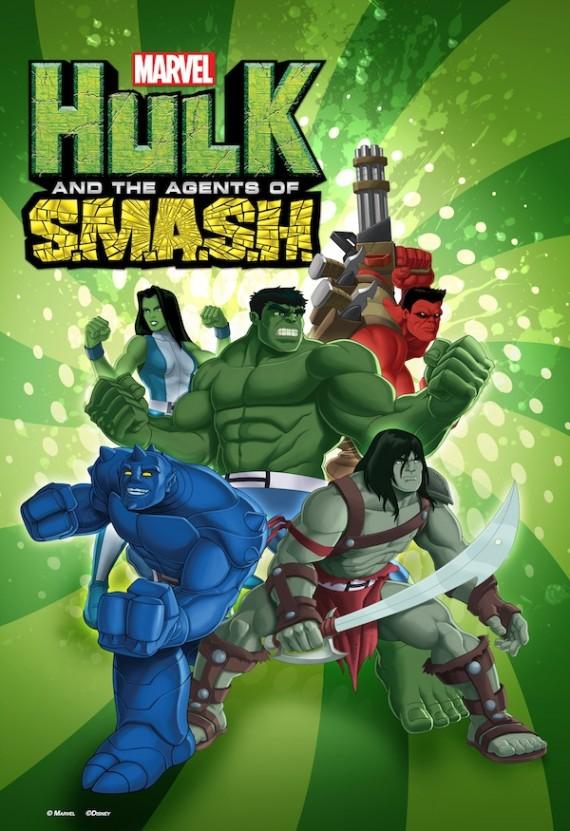 Greg: Folks, this is bad. I mean really bad. Like, “American Ninja V” bad. Like, Rob Liefeld’s Captain America bad. So bad that Tim Capel might compare it to a bowl of diarrhea.

I’ll go ahead and say it right out of the gate: this show makes bad 1990s cartoons like Iron Man and Fantastic Four look like Batman: The Animated Series.

Following on the heels of Avengers Assemble (itself a continuation/spinoff of the superior Avengers: Earth’s Mightiest Heroes) and Ultimate Spider-Man, Agents of Smash is another animated offering from Marvel post-Disney merger. It features a team of gamma-powered heroes coming together to fight crime and make what I guess could loosely be considered jokes if we were all 6-year-olds transplanted from 1964.

Nick: If it sounds as if we’re being too harsh right off the bat, we’re not. This is easily the worst animated comic book series I’ve seen since, well, Ultimate Spider-Man. I can’t imagine the “humor” playing well even to kids, and I’m well aware of what passes for humor on most children’s shows these days.

The real tragedy here is that Marvel somehow convinced Clancy Brown to attach his name to this steaming pile of gamma-radiated crap. Yes, the Kurrgan and Lex Luthor himself is now relegated to playing the ridiculously unfunny and idiotic Red Hulk.

But wait, you say, “Shouldn’t the Hulk and other Hulks (SEE HOW STUPID IT IS TO REFER TO MULTIPLE HULKS?) be idiotic? Aren’t they supposed to be dumb?”

Yes, yes they are. Except they’re not. These particular HULKS (OH, FOR GOD’S SAKE) are among mine and Greg’s least favorite interpretation of the big green guy — the intelligent Hulk. Me, I like my Bruce Banner smart and my Hulk dumb. Here, we get a Hulk fully capable of carrying on in-depth conversations, flying spacecraft and taping his thoughts for a tell-all webseries! No, I’m not kidding. And we get a Bruce Banner… actually, we don’t get a Bruce Banner at all.

Listen, I’m not asking for a kids’ show to be a psychological examination of the fractured psyche a la Ang Lee’s Hulk, but this show pretty much combines all my least favorite interpretations of Hulk into one big mess.

Greg: We decided to check out the two-part premiere of the show, titled “Doorway to Destruction.” It’s an apt title, because both parts add up to a complete narrative mess.

It literally disgusts me that Paul Dini wrote this show. Paul Dini. One of the masterminds behind the aforementioned Batman cartoon that redefined the medium. One of the brains behind the Justice League cartoon and countless terrific comic books. The creator of Harley Quinn.

He wrote “Doorway to Destruction,” and I’m genuinely baffled as to the target audience. Are the creators trying to reach the coveted 5-and-under crowd? I don’t know. I also don’t think children are half as stupid as this show thinks they are. Every single move or decision by the characters — EVERYTHING — is explained to the audience, largely through annoying, unfunny “confessionals” a la The Real World or any of its contemporary knockoffs.

To give you an idea how stupid this abomination (pun very much intended) of a show is, about 30 seconds into the episode, we’re treated to a scene of the Hulk LIFTING WEIGHTS in his PRIVATE GYM. Because that’s how Hulk gets so strong, I guess.

Look, I loved Peter David’s smart Hulk almost as much as the next guy, but this version of the Hulk has literally everything that makes the character unique and interesting stripped away, not just his savagery. What we’re left with, essentially, is a green John Cena with a bit of an attitude.

Nick: I’m going to pretend you didn’t just inform me that Paul Dini wrote this.

And as the show’s oh-so-clever title tells you, it ain’t just the Hulk here. No, it’s a full family of Hulks (UGH) made up of Red Hulk, She-Hulk, Skaar and A-Bomb, a terribly unfunny gamma-radiated version of Rick Jones voiced by Seth Green at perhaps his most unbearable.

And there’s not a likable character in the bunch. NOT ONE, with the possible exception of She-Hulk and even that is debatable at best.

These characters crack unfunny jokes, make idiotic decisions, talk in 1995 cliches and spill all their deepest feelings in the aforementioned confessional videos. Seriously, who the hell greenlit this crap? Oh wait, it was Jeph Loeb. Jeph Loeb, the scourge of the animated world. He did help create the 1985 film classic Commando, so I can’t bash on him too much, but suffice it to say his work in both comics and television since returning to Marvel a few years back has been nothing short of horrendous drivel that should be read or seen by no one, not even the worst of our prisoners.

Greg: If it were 1995 and the choices for comic book-related entertainment were limited, I could almost excuse Agents of Smash. But unlike 10-year-old me, who watched crap like Iron Man and Fantastic Four and stomached it because I’d take anything I could get, kids today are being bombarded with awesome superhero movie after awesome superhero movie. Even the maligned Ultimate Spider-Man and Avengers Assemble are better than this dreck.

Anyway, we meet weightlifting Hulk and his Gilligan-like little buddy Rick Jones, who somehow run afoul of Annihilus, a cosmic Marvel villain from the Negative Zone. Annihilus is basically just the show’s way of introducing its version of Skaar. In the comics, Skaar is Hulk’s son and is a less powerful version of Greenie.

On the show, at least as we first encounter him, Skaar is just a Hulk (ugh) who is enslaved by Annihilus and, evidently, much much much much stronger than Hulk, as is evidenced when he beats the ever-loving dog crap out of Hulk in their initial meeting and then thumps Red Hulk.

Ah yes, Red Hulk. One of the most eye-rolling creations of Jeph Loeb, Red Hulk is General Thunderbolt Ross. Yep, Hulk’s greatest enemy gave himself gamma powers, turned permanently red and now helps the Hulk for reasons that are never explained on the show. At one point, Ross even takes orders from the Hulk and informs the other members of the team that they’re to follow those orders.

Nick: And hey, know that She-Hulk from the comics? You know, the one that’s a lawyer and a superhero? The one that shows girls they can be strong, attractive and incredibly intelligent all at the same time?

No, here, She-Hulk is no lawyer or intellectual. Nope, she’s a stunt car driver. From lawyer to stunt car driver because apparently Jeph Loeb thinks kids are too stupid to understand the concept of lawyers or find them cool. But, hey, everybody loves stunt car drivers, right? Because they’re EXXXXTREEEEEMMMEEEE. Jesus Christ, this thing feels like a relic from the mid-’90s. And it started in the 2010s.

Nick: In any event, Greg briefly alluded to a plot involving Annihilus and the Negative Zone. But don’t pay any attention to that. There is no plot — no sensible one anyway. Suffice it to say Annihilus shows up, there are fights between the various…. HULKS (AHHHHHHHHHHH) and then, and stop me if you’ve heard this one before, they all team up to save the day! They then decide to all live together in Hulk’s weightlifting cave. The end.

BUT WAIT, THERE’S MORE! It turns out Skaar is really working for The Leader and is gathering intel on the Hulk and his allies. WHAT A TWEEEST!

Greg: What an apropos joke, since this is a show that even M. Night Shyamalan would call poorly written. Dini writes these Hulks as caricatures rather than characters. One could almost think it’s a subversive comedy, if not for the crushingly evident lack of self-awareness. At one point, Rick Jones, who has been turned into the even more annoying character A-Bomb, yells out “A-BOMBS AWAY” like he’s Gung-Ho or Duke charging in to take on Cobra Commander. Were this line to have been delivered on, say, Young Justice, it would be mocked by the other characters and used as a self-aware joke. I waited for this to happen here, and nope. It’s just taken at face value as a SICK BURN, YO!

Nick: And for an animated series, it’s got atrocious animation. CGI is often mixed in and stands out like a sore thumb whenever it is. Plus, the animators will often rely on a series of still images rather than fluid animation to depict motion during fight scenes. So you don’t even actually see the movements of the action. So why exactly are we watching an animated action show if you aren’t going to animate the action?

Greg: The bad writing, tone-deaf characterizations and flimsy plot could perhaps be overlooked if the show had good action scenes. Instead, as you mentioned, the action leads a lot to be desired. Red Hulk attacking Annihilus’ fleet turns into essentially a game of Galaga. Most of the fight scenes are just there to create sight gags like a giant hamburger falling on Hulk’s head. Truly … heady material.

And then there’s the laughably bad slow-motion uppercut from Skaar to Red Hulk that levels a mountain. It’s like an SNL sketch that would be used to mock a real-life action scene.

Nick: I know we’ve just hit the tip of the iceberg in terms of what we could say about this show, but can we be done now? This show isn’t worth the time or effort we’ve already wasted on it.

Greg: But dude, we haven’t gotten to the REALLY funny stuff yet, like A-Bomb not realizing how ugly he is! And She-Hulk making ribs, only for Skaar to say “meat”! HA HA HA HA!

This show kills my will to continue.

Greg: Yeah, let’s put this to rest before we Ultimatum it.

Nick: Jeph Loeb, you can go to hell!

Greg: We love ya, Jeph. But you and Paul are better than this.

Nick: In any event, be sure to check back next week as in preparation for the release of Avengers: Age of Ultron, we Countdown our favorite comic book movie sequels.

Greg: Until then, you can give us your thoughts on Agents of S.M.A.S.H. through Twitter (@gphillips8652 and @nickduke87), email (GregP@placetobenation.com and NickD@placetobenation.com) or through the Place to Be Nation Comics Facebook page.