Greg: For the first time in three months, Off the Page is BACK, bay-bay! Your friendly neighborhood fanboys are back with a look at a television show that we spent most of our lives unaware of and now wish we’d never discovered.

Nick: Indeed, in just a few weeks, the world will be introduced to a reimagined version of some of our childhood heroes — the Teenage Mutant Ninja Turtles. So, what better time to take a look at a very… special incarnation of the Turtles. This time out, we’re taking a look at Ninja Turtles: The Next Mutation.

Greg: Another in a string of successful (?????) mid-’90s children’s action shows by Saban Entertainment (no relation to the wonderful Nick Saban), the Next Mutation completely escaped my radar when it apparently hit Fox Kids in 1997. In fact, I had no idea this show even existed until I saw a random VHS collection of episodes at Blockbuster one day while I was in college. It seems to follow (very loosely) the live action movies that preceded it. I base that solely on the fact that this, too, is a live action show and the characterizations are mostly the same as in the films.

Nick: Well, it does feature the abandoned train station hideout seen in the second and third live action movies. Splinter’s ear is also slashed, as seen in the first movie. However, there are some glaring inconsistencies if the show is indeed intended to fit into movie continuity. First of all, Shredder, besides wearing a plain purple leotard with very few actual weapons and being played by a terrible actor, is no longer Super Shredder and is still alive. Neither of these things is explained or even touched on. Also, Casey Jones and April O’Neil are nowhere to be found and no reason for their absence is offered.

But that isn’t the series’ most notable departure from its source material. The show is responsible for one of the most infamous characters in all the TMNT mythos — the female turtle, Venus de Milo.

And while we here at P2B certainly welcome and champion gender equality and diversity among characters, Venus leaves much to be desired. Whether it’s the terrible vaguely Chinese accent or her general lack of personality, she doesn’t really add much to the classic foursome.

Greg: On the surface, the idea of a female Ninja Turtle might sound cool — even if it doesn’t really fit with the characters’ origin as we know it. However, this is a case of profoundly horrible execution. She’s given all the blandest characteristics of Leonardo’s personality, yet she’s also sprinkled with a dash of Silver Age Lois Lane incompetence.

Over the course of the inexplicably long FIVE-PART pilot episode Nick and I are reviewing, it becomes almost comical how useless she is.

Nick: Except for her ill-defined pseudo psychic powers, she doesn’t really do much.

Greg: I say almost, because there’s very little intentionally funny or amusing about this show.

The plot of the pilot involved Venus’ mentor/father figure being kidnapped on something akin to the Astral Plane from the X-Men comics. The problem with this is that the show’s creators actually had to attempt to showcase the astral plane in motion rather than a simple still image. This results in quite possibly the worst green screen work I’ve ever seen. Seriously, I’ve seen cable access shows that do it better.

Whether it’s the hilarious images of the Dragons (the Turtles’ new main adversaries) or a bizarre sequence featuring Splinter’s head floating through the air, the astral plane sequences are nothing but hilariously terrible.

Greg: The effects are so bad they make the Dire Straits “Money for Nothing” video look like “Avatar.”

It cannot be understated how laugh-out-loud funny the floating Splinter head is. It’s almost as laughable as the acting throughout the show.

Nick: Yes, the voice acting is among the worst I’ve heard. All the Asian accents are hilariously, borderline offensively, bad. The Turtles themselves aren’t much better. Raphael, in particular, is awful. He sounds much like what I’d imagine an effeminate Tazz would sound like.

Greg: Not fuh nothin’, I can see where you’re goin’ there, Cole.

In the actors’ defense, they are given some of the worst material ever written for television. The dialogue manages to strike that special balance between mindlessly dumb and still somehow confusing. Character choices make little to no sense, dialects change on a whim and all the Turtles’ trademark humor is boiled down to such winning lines as “MAXIMUM SHELLAGE!” and “Let’s kick some shell!”

It still doesn’t excuse performances like Patrick Pon as Shredder or Tseng Chang as Chung I.

I should mention that if those one-liners were used once, they wouldn’t have been offensively bad. But they are used in every fight scene in every episode!

Nick: Yep, and it sounds like clips being played over the top of the fight sound effects, kind of like an internet soundboard. There are also numerous canned clips of the Turtles’ vehicles. Whenever the Turtles are driving anywhere, it always looks exactly the same. EXACTLY.

Nick: To make matters worse, the puppet work on these Turtles isn’t even 10 percent as good as the work done in the movies.

Particularly hilarious are the characters’ mouths and eyes. If the characters aren’t having a conversation, their eyes mouths are set to a default position of wide open. So, basically, unless the Turtles are speaking to one another, they move forward with an unblinking, mouth-agape stare. 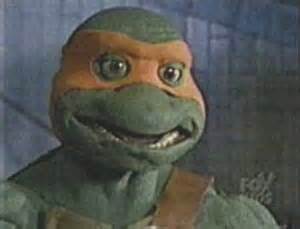 At certain points, it stops being funny and starts becoming kind of creepy, which should never be the case with a Turtles show.

Greg: It definitely gave an even creepier edge to the already strange Leonardo-Venus flirtation scene in one of the parts of the pilot, which is promptly forgotten about immediately after.

Nick: And you know, we haven’t really touched on the plot that much. And there’s a good reason for that — we don’t remember it. These FIVE EPISODES were so bad, I’ve already pushed most of the major details out of my mind.

Greg: One thing I just remembered — Venus isn’t even called Venus in this FIVE-PART pilot episode, is she? I believe she’s introduced as Mei Pieh Chi (thanks, Wikipedia!) and then no explanation is given for why she is suddenly called Venus de Milo in later episodes. Am I remembering that correctly? I’m honestly not sure.

Nick: I seem to remember there being a statue of Venus de Milo in a park or something and her being all, “Hey, that statue’s cool. Can you just call me whatever that statue is called from now on? K, thanks.”

Greg: Truly honoring the memory of her slain master, who raised her like a father and presumably named her from “birth.”

Nick: Yeah, like I said, she isn’t a shining example of a good female character.

Greg: None of the characters in this show, regardless of gender, are examples of good characters. I say that because I’m completely confident saying this Leonardo, Raphael, Donatello and Michelangelo (who, it is explained, are NOT brothers) have nothing in common with the creations of Kevin Eastman and Peter Laird.

Nick: Very true. Even Splinter, who should be the epitome of a wise old man badass, is pretty much useless here.

Well, what else is there? Is there anything else worth saying about this heaping pile of Turtle crap?

Greg: There’s not much else to say. The fight scenes are like ’60s “Batman” fights, except without the humor. I’d recommend watching the pilot for all the unintentional comedy, but at FIVE EPISODES LONG, I just can’t do it.

Nick: Yeah, maybe just one episode just to see how bad it truly is, but for the love of God, there’s no reason for anyone to watch FIVE EPISODES of this.

Greg: In many ways, preparing for this column was a form of self-abuse.

In any event, we hope you’ve enjoyed our rambling discussion of one of the worst comic book-themed television shows of all the times. Join us next week for an exciting installment of Countdown, where we’ll talk about our favorite Green Lantern characters.

Nick: And with that, we bring a merciful end to this edition of Off the Page. If for some ungodly reason, you actually want to discuss Ninja Turtles: The Next Mutation, hit us up on Twitter (@gphillips8652 and @nickduke87), email (GregP@placetobenation.com and NickD@placetobenation.com) or on the PTB Facebook page.