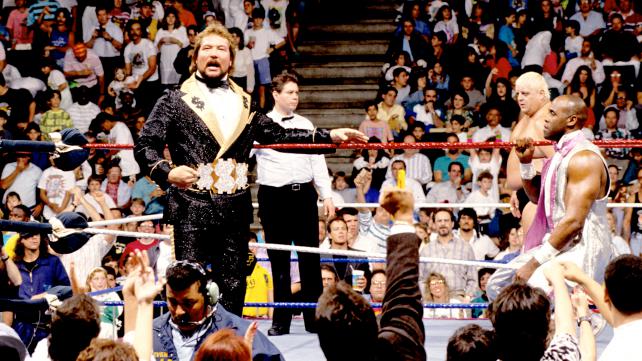 “Rowdy” Roddy Piper has packed a whole hell of a lot into his sixty years on this earth. He has been a well known name in the mainstream for 40 years now. He is a legend in the wrestling business and cult favorite of movie fans. He has overcome cancer and always stood by his beliefs…well, mostly. Hulk Hogan and Vince McMahon are often given credit for the wrestling explosion in the mid-80s, but without a top notch foil in Piper, things may not have unfolded as well as they eventually did. He has been loved and he has been hated, but one thing you can say about Piper is that he always gave his all and was always entertaining. With WWE Legends House, featuring the Hot Rod, set to debut tonight, the timing seemed right to look back at one of my favorite Roddy Piper angles: The Time He Saved Virgil.

In the summer of 1990, Jesse Ventura left the WWF because of a contract dispute, leaving a gaping hole in the commentary booth as a result. Vince McMahon decided to shift Roddy Piper out of the ring full time and had him step in to replace the Body. Piper eased into the role without a blip on the radar, immediately meshing with both McMahon and Gorilla Monsoon. He would provide color commentary on TV as well as the SummerSlam and Survivor Series pay-per-views. Piper would follow the Ventura mold in that he backed his favorites and jeered those he disliked, usually blurring the lines of face and heel. As 1991 dawned, Piper started to ebb more towards the face side of the coin and had a very hard time hiding his disdain for one wrestler in particular: Ted DiBiase, The Million Dollar Man. Not only did he despise everything DiBiase stood for, he also hated the way DiBiase abused his bodyguard, Virgil. Virgil had been a mainstay with DiBiase since they both debuted in the WWF in late 1987. He had always been a loyal soldier, doing as he was told day after day without question. However, we knew nothing of the man. How did he end up here in this shiny cutoff tux top? Does he like DiBiase? Is this just a job? What were his goals? By the time 1991 arrived, we were finally set to find out.

In the weeks leading to the Royal Rumble, Virgil was starting to show signs of rebellion, taking a little bit longer to complete a task, giving a glare or eventually downright refusing to act until DiBiase would whisper in his ear and break him down. Piper would take interest in the situation and begin cheering for Virgil to break free from his boss. He would actively yell from the booth as Virgil trembled, ready to finally walk out on his job. He would also groan audibly when Virgil always caved. Just before the Rumble, Piper took Virgil to dinner and had a long chat about standing up and becoming a man that could stand on his own. He had hoped the message got through, but minutes into the DiBiase & Virgil vs. Dusty & Dustin Rhodes Rumble match, it seemed like the message fell on deaf ears. Virgil did his boss’s bidding and DiBiase picked up the win that would end up banishing the Rhodes Boys back to Atlanta. After the bell, DiBiase demanded that Virgil strap the Million Dollar Belt back around his waist, just to prove he still was the alpha of this duo. Virgil was defiant at first, but DiBiase was not in the mood to whisper and instead told the world the reason why Virgil was so subservient: Virgil was supporting his family and his mother. He needed the money. Virgil hung his head and looked ready to cave once again. Piper was cheering him on from the booth but was crestfallen when Virgil drooped his shoulders. But then, for the first time in over three years, Virgil physically assaulted his boss by smashing him in the face with the belt as the crowd, and Piper, went wild.

Coming out of the show, Piper began training Virgil both in and out of the ring. He worked on his boxing skills and his confidence, constantly pumping Virgil up that he could stand on his own…and be a MAN! And how do you spell MAN? Well…

A match was set up for WrestleMania between DiBiase and Virgil and Piper would be in his buddy’s corner. Heading into Mania, Virgil picked up his first in ring victory by defeating Haku on TV. The confidence continued to rise. However, the team suffered a blow outside when Piper suffered an injury in a motorcycle accident (or hip replacement surgery, but stay with me) and was now hobbled and using crutches. Regardless of the injury, in the final week before the showdown, Virgil & Piper struck twice. Once on the microphone and once in the ring:

The duo had executed a great game plan and were deep inside the head of DiBiase with the Showdown in Los Angeles now upon them. With Piper hobbled at ringside, Virgil went toe-to-toe with DiBiase and ended up winning the match via countout. However, that wasn’t enough. Plus, after the match, DiBiase and his new valet Sensational Sherri assaulted Virgil and Piper, beating on his bad leg with his own crutch. It was clear things weren’t over just yet.

The feud simmered over the summer with Virgil assimilating well into the ring and slowly standing on his own more and more. Piper would still back him on commentary, putting him over strong, but he was no longer needed at ringside. Virgil was a man. At SummerSlam, Virgil got another crack at DiBiase and this time the Million Dollar Title was on the line. After 13 shockingly great minutes, the red hot crowd and Piper came unglued when Virgil pinned his boss to become a millionaire. It was the loudest pop Virgil would ever get. Piper was a force on commentary and acted like a proud older brother when Virgil got the victory. It was one of those unexpectedly great moments that make pro wrestling so great. In August of 1990, who would ever have imagined that Virgil would win a major match and get a mega pop just twelve months later? That is pro wrestling. 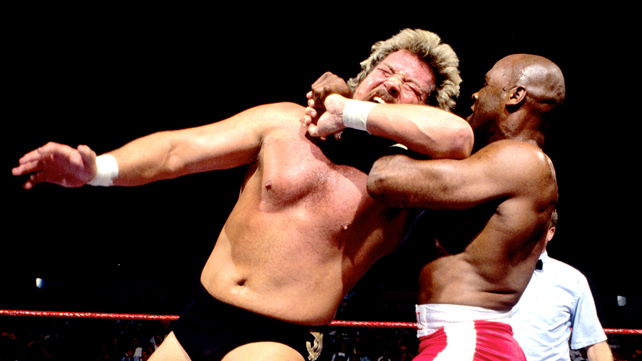 Roddy Piper has done tons of great things in the wrestling business. He is a true legend and deserves to be honored as such and I am sure he will be today. This was my small way of thanking him for eight months of unexpected enjoyment. Thanks for the memories, Hot Rod and here’s to years of many more! Happy birthday.