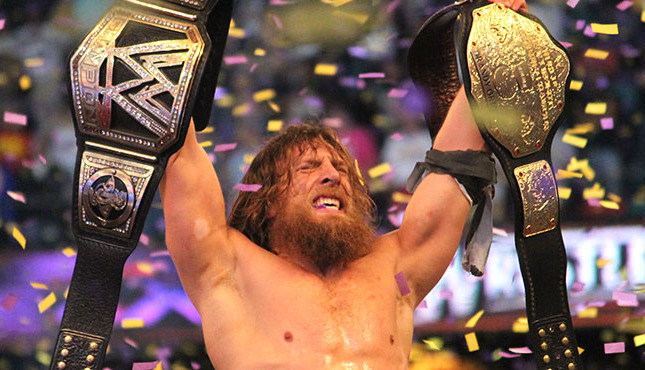 I always find myself describing professional wrestling (or Sports Entertainment, what have you) to outsiders as “something you don’t understand unless you’re a fan.”

Now, this comes across quite literally in a few ways. An outsider probably won’t understand why a grown man runs around with his face painted, his on-screen character a partial homage to the late David Bowie. It’s a fair assumption that if you showed an outsider a Monday Night Raw broadcast from the late 1990’s, they’d react with a mixture of disgust, intrigue, and maybe a little bit of fear.

Dig a little more past the surface though, and you’ll see what I’m talking about. For many of us, professional wrestling (the WWE, in this case) has always been there. It’s been an outlet, a source of entertainment, a source of happiness and sometimes even a source of pain.

Which brings me to Daniel Bryan.

We’re just about a week into the post-Bryan era in professional wrestling, and though he hadn’t actively competed in close to a year, his absence leaves a void that as of now remains unfilled.

All Bryan ever wanted to do was wrestle. This passion was evident throughout his in ring career, but Bryan himself would echo that sentiment if you asked him. While most kids had dreams of fighting fires or crime, Bryan dreamt of running the ropes. And while some get into this particular profession for the money and the fame, Bryan was satisfied just wrestling. Whether it was in front of 500 people on an indy circuit or 50,000 people at WrestleMania, the view never changed for Bryan.

Bryan was known to many, especially on the indies, as the best in the world. That wasn’t some fancy gimmick designed to sell t-shirts either. Long before he Yes’d his way down an entrance ramp in WWE, Bryan was tearing down the house (and gymnasiums, in some instances) with the likes of CM Punk, Samoa Joe and Nigel McGuinness on a nightly basis.

By the time he did make his way to WWE, Bryan’s cult-like following had well been established. His hiring, and subsequent firing shortly thereafter, only strengthened his support. Once he had won the World Tag Team Championships with Kane as a member of Team Hell No, Bryan was on the cusp of superstardom. And while he had already established himself as one of the best in the game, one accolade still eluded him.

It’s funny, when people talk about the WWE, especially the creative process behind it, you’ll often hear a lot of disagreement. A firm departure from the ways of the Attitude Era, today company stars are typically hand picked by upper management, regardless of crowd reaction. While the fans would still voice their displeasure with certain superstars and decisions, it often went by the wayside.

But the game changed with Daniel Bryan.

While Bryan battled the Authority and then WWE Champion Randy Orton throughout late 2013, he was never really supposed to be considered for “the” match at WrestleMania 30. That honor was set to go to a returning Dave Bautista, the winner of the 2014 Royal Rumble. Bryan, the consummate professional, was ready to do whatever was asked of him for the big event.

But things didn’t quite pan out the way the front office expected.

Bryan’s exclusion from the Royal Rumble match did nothing more than light a fire under his supporters. Now referred to as the “Yes Movement”, fans would often hijack segments on RAW, chanting DAN-IEL BRY-AN in unison, hoping they could will their man into the main event spotlight. Mark Henry actually had to go out of his way (and off-script) to address Bryan’s support during a segment between former World Champions on Raw, just to get the crowd to calm down.

Bryan’s unyielding passion and dedication, coupled with unrivaled fan support, left the company no choice. Not only would he perform on the grandest stage of them all, the event itself would wind up being centered around him. And on a warm night in New Orleans, Bryan finally captured the top prize in professional wrestling, defeating all three members of Evolution along the way.

The story could have ended then and there with the happiest of endings, but life has a way of changing the story from time to time.

The next 18 or so months were filled with complications and controversy. After a single title defense against Kane at the following PPV, Bryan was forced to relinquish the belt due to injury. And while he would return some time later to enter the Royal Rumble, questions about his health still remained.

It was fairly evident the company was hesitant to put any sort of major faith in Bryan considering his checkered injury past, and after winning the Intercontinental Title at WrestleMania 31 those fears were realized. He suffered yet another concussion, the latest in a string of MANY we would come to later find out, and once again had to relinquish the belt.

Months and months of speculation followed, with the internet contributing its fair share of rumor mongering. I had seen every conspiracy theory possible, the most notable being that WWE was purposefully keeping Bryan out of action, fearing his overwhelming popularity may once again disrupt the plans they’d laid out. Of course, nothing could be further from the truth, and our fears were confirmed last week from the man himself.

I am happy Bryan got out before his condition worsened. I’m glad he’ll be able to start the next chapter of his life, a family and a long healthy life are hopefully in his future. Bryan did not become another statistic and for that we can all be grateful.

But the ride we all went on will never be forgotten. Part of the reason I feel so many of us supported Bryan was the fact that he was relatable to the fans. He wasn’t some hulking, six-foot mass of a man with muscles on top of muscles. He was a pretty normal looking guy and a damn good wrestler. We the fans appreciated that, so much so that we used our voices to create some real change in a company that sorely needed it. Daniel Bryan the wrestler may be no more, but the legacy he left behind is everlasting.