Skip to content
MMA
Place to Be Nation Staff 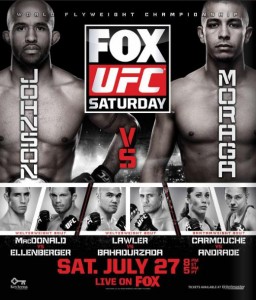 Despite its headlining status, the flyweight championship main event of UFC on FOX 8 is hardly the most interesting fight on the card. The fight that holds the second spot on the marquee is garnering it’s fair share of buzz on the MMA scene. Jake Ellenberger and Rory MacDonald are two of the most important names on the short list of top UFC welterweights. Ellenberger is probably the more familiar of the two, while MacDonald is definitely making a name for himself as well. Let’s break down the match-up, and take a look at each fighter.

Jake Ellenberger is 28 years old, stands at five feet ten inches tall, and has a reach of seventy-three inches. He has a record of twenty-nine and six, with eight and two in the UFC. Ellenberger is coming into this fight riding a two fight win streak, including a knockout of the night win over Nate Marquardt. He is currently ranked at number four in the UFC welterweight division. Ellenberger is former Marine, and Division II wrestler for the University of Nebraska at Omaha. He also coached the school’s wrestling team to back-to-back championships.

Rory MacDonald is twenty-three years old, stands at five feet and eleven inches tall, and has a reach of seventy six and a half inches. He has had only one professional loss, to Carlos Condit, in his second bout in the UFC. MacDonald has been a rising star in the welterweight division for some time now. He has been hailed by many as the next Georges St. Pierre. He shows some of the same swagger in the octagon that fans are used to seeing from Anderson Silva. (Though he doesn’t carry quite the cocky air about himself that Silva does, or did.) MacDonald is the shining star in the crop of young fighters climbing the ranks that are trained specifically for mixed martial arts. The great fighters of the past and present were all proficient in one particular practice, be it wrestling, jiu jitsu, boxing, muay thai, etc; that had no other professional outlet for their talents. These fighters had to hone in on their own weaknesses, and make themselves more well-rounded fighters. MacDonald has not had to reinvent himself. He decided, at age fourteen, that he was going to be an MMA fighter. His first professional fight was at age sixteen. He is also a former King of the Cage Lightweight Champion.

Now, with the fine print out of the way, let’s talk about why Jake Ellenberger is suddenly making headlines coming into a co-main event of a secondary fight card. Mixed martial arts has seen its fair share of changes since its inception. One technological innovation seems to have more effect on the landscape of the sport than many purists think it should. In what some are referring to as a “post-Sonnen world,” fighters are able to garner interest in themselves and their upcoming fights through Twitter. Jake Ellenberger has taken notice. He has taken to the social medium to verbally attack his opponent in the weeks leading up to their battle. Ellenberger has cleverly nicknamed his opponent Rory “McDummy,” and polled his followers as to “Which round is Rory getting melted?” He has also threatened MacDonald with “horizontal television time.” He continued the assault in interviews and media calls, saying that MacDonald has been “made by the media,” and telling him that “This isn’t a Tears for Fears lookalike contest.” (To be fair, I thought that one was pretty hilarious.) The only downside is that Rory isn’t really taking the bait. He has responded to the some of the Tweets, but only in short bursts of teenage text jargon, “4some1 with such a week jaw u sure use it alot 2 talk shit when ur done buildin ur self up ill b there 2send u back 2reality.”

MacDonald is about as straight-laced as it gets in the MMA world, so it’s no surprise that he isn’t responding to Ellenberger’s badgering. He trains with welterweight champion Georges St. Pierre. That, in itself, shows that he maintains a higher level of discipline than most of his peers. That isn’t to say that he doesn’t use his own methods to popularize himself outside the octagon. He came into the UFC as a very vanilla looking fighter, from an aesthetic standpoint. He then transformed himself into the Canadian gentleman we see before us today. He is never seen looking anything less than dapper, until he walks out for his fight. MacDonald also maintains a fight record of fourteen wins and one loss. Who was that one loss to? Carlos Condit, who also handed Ellenberger one if his two professional losses. This fact gives this fight even more gravity than it already had.

Condit’s last two fights were a title fight loss to GSP at UFC 154, and a loss to number one contender Johny Hendricks at UFC 158. So, Condit is stuck in the purgatory of having two losses on his record, but those two losses being to the top two fighters in the division. Condit could be the perfect test for the winner of this fight. A rematch is easy to promote, plus it’s been years since Condit’s deafeat of either man. This could serve any of the three men well. Condit could prove that he is still a valid title contender. Ellenberger could gain a much awaited title opportunity. MacDonald raises the most questions, because he trains with GSP. Obviously, if Johny Hendricks can knock off the longtime welterweight champion in their upcoming bout, this won’t be a problem. MacDonald came into the MMA world with a silver spoon in his mouth, and could finally confirm all the hype. I feel like this fight is Rory’s to lose. He is the superior fighter, and a victory in this fight will lock him into the title picture, one way or another. What do you think? Let me know your thoughts on the Place to Be Nation Facebook page or on Twitter, @ThomasPondick.