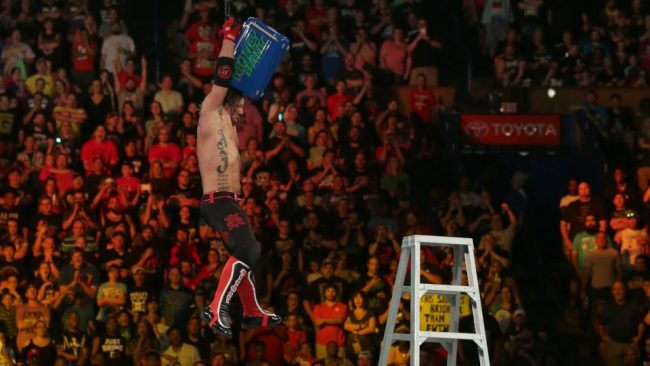 SmackDown’s latest WWE Network special has superstars climbing a ladder for the chance at a guaranteed title shot in WWE Money in the Bank 2017!

Tonight’s show is live from the Scottrade Center in beautiful St. Louis, Mo., and features two Money in the Bank ladder matches – one for a guaranteed shot at the WWE Title and one for the SmackDown Women’s Title.

Money in the Bank shows can be chaotic, they can be exciting and they have almost always delivered in terms of quality since the match type was given its own show for the first time in 2010. Since that first show, 11 men have won briefcases with only two (John Cena and Damian Sandow) not winning the title when they cashed in. The 2017 edition of the event features the first time an MitB match is held for female competitors.

The card tonight only has 6 matches announced between the pre-show and the main show, so either these matches will get a lot of time or matches will be added between now and then. As usual, the pre-show starts at 7 p.m. with the actual event starting at 8 p.m. live on the WWE Network. And maybe PPV, who can remember anymore…

Mojo Rawley and Zack Ryder vs. Primo and Epico Colon – It’s a little upsetting that the Colons and the Hype Bros get a slot on this card and a team like Breezango – who have been great in their role on SmackDown! – aren’t announced for the card at all. There were four men in this match that I absolutely don’t care about. This match would have been worth it if Zack Ryder turned on Mojo or vice versa, but with the Hype Bros just winning outright, it’s just a waste of a spot, even on the preshow.

Money in the Bank Ladder Match: Carmella vs. Charlotte Flair vs, Natalya vs. Tamina vs. Becky Lynch – We’re kicking off the show proper with our “history-making” first-ever women’s Money in the Bank match, with five women vying for the briefcase for a shot at the champ. Charlotte, Natalya and Becky have all been champions before, while Carmella and Tamina are looking to set up their first title reign. These matches are always spot fests, and they’ve devolved into a WWE style where two competitors go at while the rest lay around the ring, which is fine for TV production, but it defies logic a bit.

The women follow the formula, with spots leading to laying around while someone else takes over. The spots are fun, but they mean less and less every time we see one of these matches. The St. Louis crowd seemed into it, though, which helps. Of course, the WWE can’t help but make a mockery of their “historic” match by having Carmella’s second, James Ellsworth, climb the ladder and pass the briefcase down to Carmella, leading to the very exciting shot of a bunch of referees arguing… and then Ellsworth making the announcement. Yeah, this company can’t help but get in its own way with stupid moves.

Carmella is a fine choice for the briefcase – she’d never earn a title shot otherwise because she’s terrible – but there were probably a lot better ways to have her get the briefcase. We’re off to a great start here tonight…

SmackDown Tag Team Titles: The Usos (c) vs. The New Day – The New Day have been off TV since the “Superstar Shakeup,” while the Usos have been reinvigorated somewhat with their heel turn. Kofi and Big E represent New Day here, with Xavier Woods on the outside, which is the team’s classic alignment. I think the Usos had a bad rap for being bad – they really just needed to be heels – they seem to be much better at it. The double-suplex onto the ringpost outside to Kofi was pretty vicious. The New Day, on the other hand, still feel pretty stale after holding the WWE tag team titles long enough to break the record held by Demolition.

The Usos, after not being able to put away New Day, decide to take a walk for a countout loss, which is a pretty classic “first match in a series” ending to set up rematches. I enjoyed the match, and the ending makes sense in a division where your best team – American Alpha – is on the shelf and your next big team – Breezango – is a comedy pairing.

SmackDown Women’s Title: Naomi (c) vs. Lana – Because all the other women in the SmackDown! Live division were in the ladder match, manager Lana, who has only had a handful of matches ever, gets a title shot here. Her entrance music is pretty swank, though. If Jim Ross were on commentary, he’d probably warn fans that this match could be “bowling shoe ugly.” To add to that, Carmella comes down with the briefcase in the middle of the match and she and Ellsworth hang out at ringside while Naomi gets a submission on Lana to retain.

The Princess of Staten Island decides it’s best to fight another day, sparing us all from what would be another sub-par match.

Because we need to kill time on a card with only five matches, we get a segment with Breezango setting up a confrontation in the ring. But before we get to that, ROH wrestler Mike Bennett and his wife, former WWE Diva Maria Kanellis, come out, with Bennett taking his wife’s last name. And they promote the power of love. Sure. The commentary team seems just as confused as I am. JBL: “He took her name.” Thanks, John.

We eat up more time introducing a row of legends including Larry Hennig, Baron Von Raschke, Sgt. Slaughter, Bob Orton Jr. and Ric Flair as we prepare for the WWE Title match, which should guarantee that the winner of the Money in the Bank briefcase won’t be cashing in tonight.

WWE Title Match: Jinder Mahal (c) vs. Randy Orton – The midcard WWE Champion gets his title defense in the middle of the event, which is fitting. I give WWE credit for trying to get Mahal over as a threat, damaging Orton’s knee to start the match off. Both guys played to the legends in attendance, with Mahal going for Flair’s figure-four leglock and Orton paying tribute to his dad with a superplex.

The Singh brothers break up a pin and get thrown out by the ref, but decide to get the cheap heat attacking Orton’s father, leading to Mahal’s entourage getting destroyed by the Viper, putting one of them through a table with an RKO. But Mahal takes advantage of the rest and hits his finisher on Orton to retain the title. Unbelievable. The Maharajah continues his improbable title reign. The match layout made sense, but Orton and Mahal aren’t breaking any new ground here.

Breezango vs. The Ascension – Set up in a backstage skit earlier, apparently Konnor and Viktor destroyed Tyler Breeze and Fandango’s offices. Who knew the Ascension were still employed. Three tag team matches in one night may be a minor miracle given the recent state of the division on both shows. Fandango gets the win with a small package and the Ascension continue to be jobbers.

Money in the Bank Ladder Match: AJ Styles vs. Shinsuke Nakamura vs. Kevin Owens vs. Dolph Ziggler vs. Sami Zayn vs. Baron Corbin – Corbin assaulted Nakamura before the match started, taking him out of the match, and instantly making Corbin my new favorite wrestler. Given the guys in the match, the methodical pace of the opening was surprising, as we went into lay around mode a lot faster than I was expecting. This match probably won’t be considered one of the better Money in the Bank ladder matches in the future.

So many high impact moves off the ladder and around ringside, with my favorite being Styles hitting Zayn with a Phenomenal Forearm while Zayn was near the top of the ladder. Styles can’t manage any momentum, though, as Corbin continued his path of destruction. And then AJ hit Owens with a John Cena Attitude Adjustment onto a ladder propped up outside. Owens continues to take ridiculous amounts of punishment in ladder matches. And then Styles takes a nasty fall after climbing the ladder and hanging from the briefcase after Ziggler moved the ladder away.

Nakamura, of course, comes back from the earlier beating and takes out all the guys who had been beating the hell out of each other. We get a showdown between Nakamura and Styles, which feels like it should have been a bigger deal, but it took a bit to get the crowd into it. Chanting THIS IS AWESOME, though, is maybe a bit much. The showdown didn’t mean much, though, as the only thing it led to was Corbin climbing the ladder and … slowly… unhooking the briefcase and becoming Mr. Money in the Bank. Nothing spectacular here, and in fact the lay-around style actively hurt the pacing of the match.

With Corbin winning the briefcase, I can assume Mahal’s title reign isn’t long for this world. We’ll see if we get another cash-in at SummerSlam in August.

Overall Thoughts – It’s a typical WWE Network special. Nothing terribly offensive – except maybe the ending to the women’s MitB match – but nothing that stands out as an amazing match.

The next show on the WWE Network will be the Raw-exclusive Great Balls of Fire (no, really, that’s the name of the show) on July 9 and SmackDown! Live is back with Battleground on July 23.