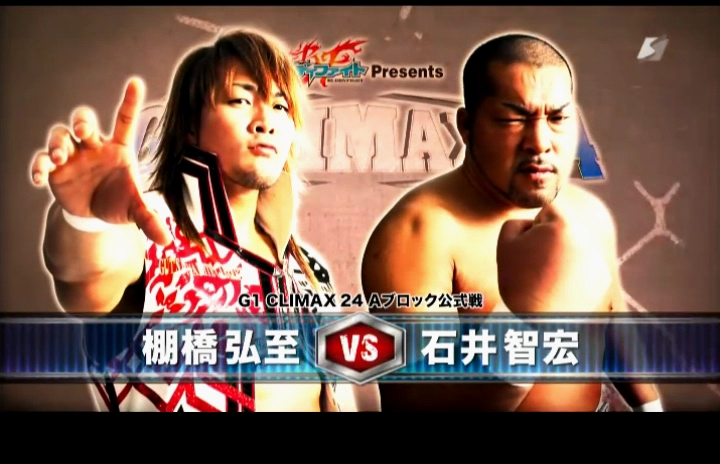 Wednesday was a marathon session of rasslin’ watching. To me, the key to a good binge is to not get too burned out. After watching around 8 hours of wrestling on Wednesday, I was getting to that point. I took a break on Thursday as you will see reflected in the time stamps and feel refreshed jumping back in. I won’t make my lofty goal of being caught up by tournament end, but I think averaging a show a day is a pretty good back up goal to try to obtain.

Two Bullet Club members go head to head in our opener. Gallows’ green gear is pretty swank. This match didn’t reinvent the wheel, which was a relief, but it was so methodical. New Japan had set a template of having hot openers and this felt extremely long given the eight minutes it lasted. Both guys seemed to know their limitations and they worked a power matchup with every move being hit cleanly but without much impact behind it. Gallows is able to put Fale away with a bicycle kick in an upset to me. *1/2

I couldn’t get into this one at all. It just seemed generic and DBS did some power moves on top before Nagata came back and picked up the victory with the exploder. Chalk it up to overkill of wrestling watching today. I wouldn’t say this was bad but it is about as average as it comes. **

Oh man, this may not unsour my mood. Welp. This was stinky too. Yujiro just can’t hold my attention for anything. Togi has had some good matches working from underneath but it looks so ridiculous seeing the scrawny Yujiro getting so much offense on the bulky Togi. Togi does come back and the end but by this point I had already checked out. Yujiro lands a low blow and the Miami Shine to pick up the victory. Next. *3/4

Finally, a match with promise. They delivered here. This was worked right on the edge of feeling pretty meaningless and just running through spots for the sake of spots, but they kept everything together and finished the match at the appropriate time. Shibata is able to win with the kick and he has continued to impress me throughout this tournament. ***1/4

Anderson was only back in my good graces for one match as I thought this was a poor effort and the complicated finishing routine that toed the line between intricate and interesting and looking like an audition of so you think you can dance, went way overboard at the end of this match. There also wasn’t any focus or prolonged story in this one. There was a lot of moves, but nothing tieing them together leading to a disappointing effort overall. **1/4

Coming home from an Atlanta Falcons preseason win and still feeling the high of that along with the tinge of a buzz still left, I decided to watch a few matches before calling it a night. This was one of the better matches on this card so far. I really liked the work Suzuki did on the outside with Archer’s leg by wrapping it around the guard rail and working it over back inside the ring. The choke submission was also fun as the finish even if it didn’t serve much purpose in the greater whole of the match besides being Suzuki’s finisher. The main problem I had with this one was Archer’s comeback where he ignored the leg damage and we had no reference to all the groundwork Suzuki laid working it over. Good match but those flaws failed to make this one advance beyond that. ***

This match worked better than the previous one solely off of Nakamura’s performance. In fact, Shelton attacking the leg here was probably less interesting than the work Suzuki did. Nakamura kept everything together and made the work count during his comeback, favoring the leg and having to ratchet up the strength to hit the Boma Ye. Shelton has now hit a skid after a fast start and Nakamura continues to roll forward. ***1/4

Tenzan has been putting in these really good performances night after night but just needed a willing partner to accentuate his strengths. Look no further than AJ Styles. This was the most complete Tenzan match of the tournament so far and really, really good. The struggle that goes on during the Anaconda Vice sequence draws the viewer in and had the crowd in a frenzy. AJ is eventually able to win with a Styles Clash and it felt like an integral win for him over a New Japan legend. ***3/4

With these two personalities, no way this match would be less than fun. That is exactly where it pegged for me. I think it probably would have been wiser to have had this lower on the card overall. The nearfall Yano got after hitting the low blow and roll up combo was great. This was about the maximum amount of time I would aspire for Yano to be on top against a top level opponent. Okada hits the Ranimaker to bounce back after Night 5. **3/4

These two had a really good match last year in the G-1 and then a great one in November. I had high hopes for this one, but it disappointed me in aspects. It may sound odd, but I want vicious violence with strikes in my Ishii matches and this had some good strike exchanges but didn’t have the struggle and tenacity that his other matches convey. The finishing run took a lot to put Ishii away, making him look strong, but I wasn’t pleased with the journey featuring some submission attempts and table setting. Tanahashi picks up the win and air guitars to end the show. ***1/4

Night six thoughts: This was one of the worst shows of the tournament so far, along with night three. The first half was absolutely putrid. However, I would recommend seeking out the AJ vs. Tenzan match. I am lower on the main than most people but the build to the finish failed to get me engaged in the match overall.