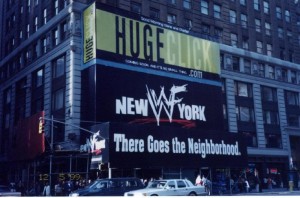 So on last Monday’s Vintage Vault episode dedicated to the 2000 Royal Rumble, Scott and Justin discussed the opening of the theme restaurant WWF New York, and spent a few minutes going over it’s brief history. Well, that got my memory jogging, and a quick trip through the Internet revealed that it closed its doors as a restaurant ten years ago. So, here is a little tribute to a venture that had so much potential, but just crashed and burned, and interestingly enough, probably was a hint as to disasters yet to come both that year and beyond.

It opened its doors in January of 2000, to much fanfare on the corner of West 43rd Street and 7th Avenue, in the historic Paramount Theatre. Yes it was in the midst of the Disney-ification of Times Square, which continues to this day of course, but it was a nice splash of counter culture in midst of safer outlets. And with the home office of Madison Square Garden literally ten blocks away, the location was pitch perfect. As was said on the show though, it was pretty tame, and sadly for the most part was a generic theme restaurant. It had a nice little gift shop of course, but that was about it. They did have events there, and superstars would make appearances during PPVs, with the PPV coverage cutting over to the restaurant to see what was going on. Famously, the Big Show’s antics at the 2002 Wrestlemania viewing party was used as part of Cody Rhodes’ “Big Show’s Wrestlemania Fails” needling leading up to their Mania match in 2012. 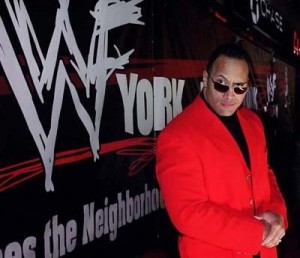 But none of that seemed to quite deliver on what it could have, or should have, been. As was said on the podcast, they would rarely show much beyond the standard Raws, Smackdowns! and PPVs, and while this was before Vince started buying up dead promotions’ libraries, they still had plenty of stuff they could have used in rotation. And while yeah, they probably wouldn’t want to acknowledge the existence of other avenues of sports, it would have made sense for them to show the latest UFC PPV, or big boxing PPV, as well as a spot for watching football on Sundays and such.

And speaking of histories, while I can see why they would want to scale things back in order to bring in the non-wrestling crowd, but considering other theme restaurants’ draw is interesting memorabilia and historic artifacts around the place, there was nothing really to distinguish the WWF New York from a TGI Fridays or an Applebee’s in terms of ambiance of where you were. And if they didn’t want to turn off the non or casual fan, then they probably would have done well to throw in some classic arcade games, or portals where you could sit and play whatever the current game was. Stuff that would have given people who had lapsed in their wrestling fandom years ago to have some nostalgia, as well as give people a taste of what was hot at that moment in the company. I liked the idea Scott threw in about the lack of a ring in the place. While I am not sure what exactly a ring in the middle of a restaurant would do, but there were possibilities. Remember the original Shotgun Saturday Night concept of being in clubs and bars? There ya go! Not saying bring it back on a regular basis, but an occasional fun thing for patrons to enjoy while eating and drinking could have added a special flare. It would also have been a convenient place to film Tough Enough as well, and again the backdrop of The Garden would have been a neat carrot to dangle in front of hopefuls.

And don’t get me started on the quality, or lack thereof, of the food selections! Soon after it opened I had the opportunity to eat there, and promptly got sick later that night! Probably just too much crappy grease or something on the food. Would never actually eat there after that incident, though I visited it a few times and picked up a couple of action figures. Well, not only was the food woefully generic, the items also had generic names as well, though a quick online search finds a menu on eBay, and it appears only the desserts offered have wrestling related names. Granted neither does, say the Hard Rock Cafe, but at the same time considering the type of gimmicky place you are trying to be, why not put the name of a wrestler, or a move on a dish.

The end finally came in 2003, though not before getting a name change to “The World,” again how generic can you get, due to the legal battle with the World Wildlife Fund, with the closing of the restaurant in February, and the shop soon after. A few years later the Hard Rock Cafe moved in from its longtime home on 57th Street and Broadway, and they’ve been there ever since. And while the WWE has used the facilities for press junkets and an episode of 2006’s Diva Search, the venture remains another sad footnote of Vince McMahon’s failures when trying to branch out into other avenues to help promote the product. Oh, it wasn’t as epic as the WBF or the XFL, but it was just a simple case of a great concept mixed with horrible execution. And while there is some comfort in the idea that restaurants like it tend to not be long lasting ventures, (hell, even your average mom and pop dive bar probably only has a few years shelf life if its not constantly changing management teams), as ESPN’s sports themed restaurant, ESPNZone, across the street from it closed up shop suddenly in 2010 after a twelve year run.

But it still is a place that could have been so much more and yet is another footnote to history. And of course to be fair, while I seem to be eulogizing a rather expensive tourist trap, as I outlined, there are ways to break away from the generic tourist trap mold and be more than just a tourist trap, and be a long lasting destination of sorts, even with the tourist trap stigma tied to you. I mean I’m sure it would have been a great hub for people to meet at in New York City at times during this year’s Wrestlemania out in East Rutherford, to say nothing about events at Madison Square Garden. But in the end, it was what it was, another failed McMahon-backed venture.