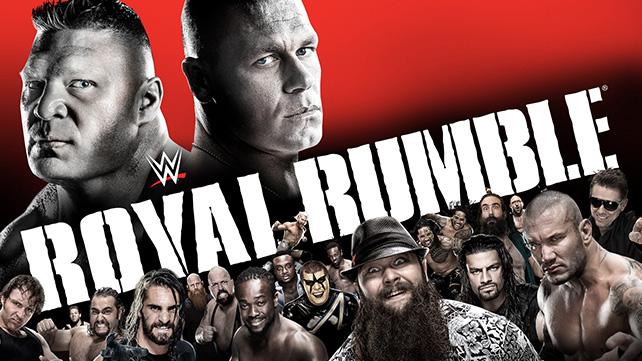 Just because I am contractually obligated to say it regarding anything previewing the Royal Rumble, allow me to come out and say that the Road to WrestleMania starts here. This weekend, the holiday season of  Professional Wrestling begins! Everyone is descending on the City of Brotherly Love, and the Rumble is the centerpiece. One-man shows, Attitude Era debates, super cards for indy promotions. You name it, some gimmicks will be sold, some titles will change hands, and smarks will be doing a whole lot of typing when the dust settles. Thankfully, I only have to write about this one show: a special event that really needs to put a notch in the win column for The E. It might be one of the shows where, if the predictable outcome occurs (namely Brock retains and Bryan wins), everyone will be happier than Steve Corino at a Frozen Sing-A-Long party. Anything that deviates from that plan could cause mass hysteria the likes nobody has seen since, well, last year’s Rumble. So let’s dive right into it, shall we? Or would you rather have me talk about deflated balls for the next 3,000 words? That’s what I thought! 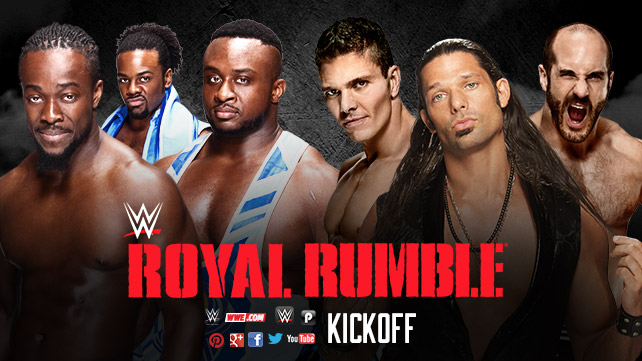 This match was thrown together in the last seven days and provides a tremendous opportunity for these six underutilized talents to earn a pay day. It also will feature an up-tempo pace to get the crowd ready to cheer wildly all night. New Day will bring plenty of sizzle with their double team maneuvers and folks are starting to go “ga-ga” over the Cesaro/Kidd pairing. They are kind of like a modern-day Power & Glory and they just gel perfectly together. It’s definitely one of those cases where two guys going nowhere stoke up a bond and get over in spite of the company constantly dragging them down. Now add the wrinkle that this is an elimination match, and the possibilities are endless. New Day have lost steam since they started so a loss here wouldn’t be that unexpected. Picking Cesaro or Kidd would be gutsy since it seems to never happen, even on Kickoff shows. Adam Rose is just an added body. If you hold a gun to my head, I’d say the faces go over here and the kids get something to dance to right off the bat. MCGINN’S PICK: NEW DAY IN A SWEEP

PAIGE & NATALYA VS. THE BELLA TWINS 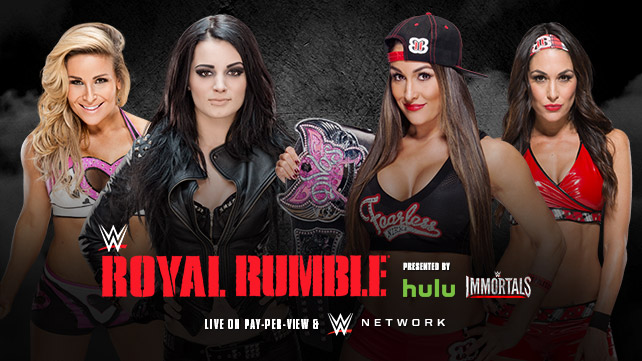 Did any of you know that Paige goes by “The Diva of Tomorrow” these days? I sure as hell didn’t. I guess that’s what happens when you watch Divas matches on mute and you disable the subtitles on your TV. In any event, Paige is united with “The Queen of Hearts” in their hatred of all things Bella. Why this couldn’t be a 4-corners Divas Title match, I’ll never know. It’s not like we don’t have 60 tag matches already on this show. Still baffling is why Brie is standing beside her treacherous sister. Did we forget SummerSlam ever happened? Aww, geez, I’m getting steamed like I used to get during Raw Recaps. I’ll be in attendance for this and every other match on this card, but I’m guessing I’ll be paying for a chicken finger basket by the time the bell rings in this one. MCGINN’S PICK: THE BELLAS… I GUESS

THE NEW AGE OUTLAWS VS. THE ASCENSION

Oh God, no! Okay, if the last match was the chicken fingers and fries basket, this match will be when I take a massive dump. That’s exactly what’s going to happen in the ring so it’s appropriate. This is the Cena “Poopy-Joke” match of the night. Does ANYONE want to see NAO in the ring again? Nope. Has The Ascension been anything more than a steaming pile of D. Jones manure since they arrived to the main roster? Hell no. It’s one thing to compare yourselves to some of the best tag teams of all-time. It’s completely another when you say you are better than those teams and you haven’t done anything besides beat up homeless people for weeks. And, not for nothing, you are getting murdered on the mic by a truly wretched announce team each and every show, plus your face paint is beyond goofy. For the sake of the team, Konnor and Viktor have to dominate this match. Anything longer than a 2-3 minute squash against these fossils will do these rookies no favors. They are pretty much already toast in my eyes, but a convincing triumph here could keep this Titanic above water. MCGINN’S PICKS: THE ASCENSION

The Usos (C) vs. The Miz & Damien Mizdow 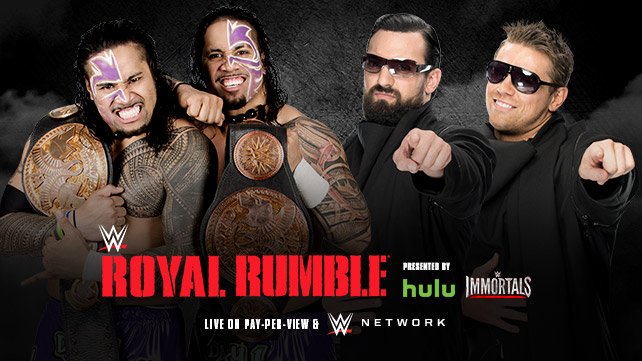 One match I am excited for, outside of the Rumble match, is this bout for the tag straps. The Usos could have a fun match with a pair of snow shovels and are certainly deserving of another title reign. This feud has taken on many forms over the last number of weeks. Miz looked like he was trying to turn Jimmy Uso’s wife, Naomi, against her hubby in order to land a music contract. That seems to be on the back burner, though I still insist that she would make a nice addition to Miz’s entourage. Now it appears like this match is really setting the stage for an inevitable breakup between the “A-lister” and his stunt double. Some are comparing this split to the one Virgil had with Million Dollar Man Ted Dibiase back at the Royal Rumble in 1991. While I think this angle still has some juice, others may feel it has run its course. It has been must-see television though every step of the way. Perhaps Naomi does turn on Jimmy on Sunday and the Mizdow thing is really just a red herring. Still, the Usos are too good and likely have a date with the Ascension or Cesaro/Kidd down the road, so they keep their belts on this night. MCGINN’S PICKS: THE USOS

Now we are cooking! I have to commend the WWE for how they have built up this co-main event. If you watch the weekly shows, it’s hard to tell what direction they plan on going with for the top guy on the roster. If Brock holds the belt, then you can see a nice two month build towards Mania with the Rumble winner trying to conjure up a strategy to slay the beast. What underdog will be able to conquer the conqueror? Brock ended the streak, murdered Cena in the summer and is still very much an attraction as evidence by the reaction he gets from the crowds on Raw. Cena winning would tell a nice story in it’s own right. This match was originally billed as the final chapter in his rivalry with Lesnar. Naturally, since Cena is the franchise and Brock is the part-timer, it would make sense for him to take the belt while Lesnar goes back to collect a big pay day in MMA. That brings us to Rollins. Why put him in this match unless the future is now? Rollins has surpassed every other heel on the roster besides Brock. He has killed his last few promos and the fans just absolutely despise him. Imagine him being taken out early, Cena wins the strap, everyone goes bananas and then, cha-ching, Rollins cashes in the briefcase! The roof might explode. This is definitely a tough nut to crack. It truly can go in any direction and I’ll be the first to admit that I was wrong for thinking the Rollins inclusion was a bad idea. I don’t think there is a wrong answer here. If Brock is truly one foot out the door already, I see no problem in him dropping the belt and giving us back a full-time champion. They always have Cena in their back pocket, but Rollins being added to this match doesn’t seem like an accident. I will probably be wrong and craziness like a return by Randy Orton could spell doom for Mr. Money in The Bank, but if you ask me to make a pick, I say the future is now! MCGINN’S PICK: SETH ROLLINS 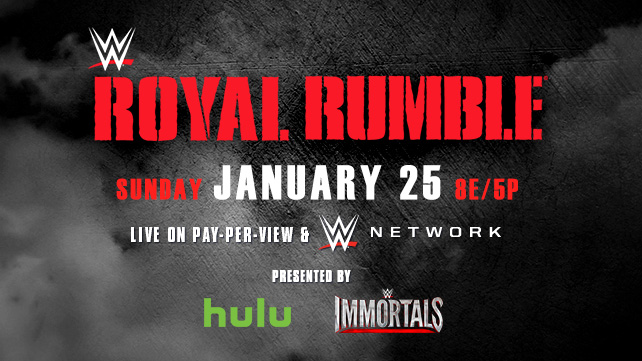 One of my favorite matches ever! Seriously, is there anything better than a traditional Royal Rumble match? 30 Superstars, one ring, all for the chance to headline WrestleMania. It is an absolute treat to see them live. The countdown, the buzzer, the music, the fireworks, the surprises, the face plants on the mat. If a wrestling event was a work of art, this would be hanging in the Louvre. I miss the days of Vince announcing all 30 competitors in the PPV open, but I do enjoy the surprise entrants like a returning superstar or a monumental debut. This year’s edition should be no different. The favorites include Roman Reigns, Dean Ambrose, Rusev, Bray Wyatt and Daniel Bryan. Bryan’s return has been a breath of fresh air. The combination of his health plus the move to Thursday has really boosted Smackdown the last few weeks, and fans are just as geeked as ever to see him once again on top of the mountain. Reigns might have been in that spot months ago, but his momentum has stalled and his mic skills are at best lackluster and at worst, bowling shoe ugly (Thanks Jim Ross!). You would have to imagine that he is likely Vince’s pick. I can see some surprises like an Orton sighting, or do we hear the Undertaker’s gong like we did in 2004? Some storylines could be moved along like Rusev/Ryback and Dolph vs. The Authority. Maybe this is a great opportunity to give a push to the Bad News Barretts of the world. Maybe #BNB can clear the ring at one point and then deliver some “Bad News” to the next man who enters the ring. At the end of the day, WWE still needs to hit that walk-off home run to get fans excited for Mania and subscribers to the network to renew without thinking twice. That’s why I think you give this one to Bryan. He is the only guy I know who can be gone for eight or nine months and still be the hottest thing you have going for you. They should make nice with the little Boxtroll from what happened last year and have him begin his climb back to the top in Philly. Reigns will have his day, but not now. Bryan has earned this chance. He has overcome so much and would have outstanding matches with any of the three guys talked about in the title match earlier. Do the right thing, WWE! You can’t afford to fumble this one so close to the goal line. The answer is clear. YES! YES! YES! MCGINN’S PICK: DANIEL BRYAN

Be sure to check out all the Royal Rumble themed articles and podcasts here at Place to Be Nation. Don’t forget to look for me and the rest of the PTBN crazies as we brave the elements this weekend to witness this beginning of the year tradition. I’ll be the good looking guy in a Bruins sweatshirt, so I won’t be hard to miss. Until next time Nation, let’s get ready to Rumble!