What’s the “best” PPV available on the WWE Network?

Andrew: When it comes to choosing the outright best show in a given promotion, specifically WWE and its library of shows that will be available all at once on the Network, that almost feels like picking a favorite child (Or, in Antonio Cromartie’s case, picking ANY of his children ::drum snare::). WWE will be my pick this case, and the show that I would make the strongest case for as my all-time favorite show from Titan Towers is the one right before WrestleMania X-7, and that is No Way Out 2001. The Austin/Triple H Three Stages of Hell match remains to this day, in my opinion, the greatest match in the company’s history.  It was a perfect match that beautifully melds a climactic story with brutality, great wrestling, and a breathtaking ending. That was not even the main event, as The Rock won back the world title from Kurt Angle in a match that was abridged by time constraints but delivered in a huge way for both men, especially the extra vicious Angle. The Fatal Four-Way for the Intercontinental Title is terrific, the Hardcore Title match was a hot way to open the show, and even the tag team tables match was creatively done. By the time that show was over and the Las Vegas crowd was stumbling out of the arena in awe of what they had just seen, I thought at the time that there was no way WrestleMania was going to top it a month later. As time goes by, I still don’t think it did.

Todd: Well then, I’ll follow up No Mercy 2001 and be “that guy” and say Wrestlemania X-7. I don’t know if a company has ever had as impressive a roster as the WWF did in 2000 and 2001. There was someone worth watching at every spot in the card and you regularly saw names like Eddie Guerrero and Chris Benoit in the mid-card, which tells you how hot the main eventers were. Steve Austin was working his best matches since his neck injury and guys like Rocky and HHH were putting out insanely good performances as well, most notably Hunter’s excellent match with Austin the month before that you alluded to;  just a brutal, sweet and unique affair. There have been some excellent podcasts, reviews, and write-ups here on PTBN and virtually everywhere in the infamous internet wrestling community about X-7 and all pretty much come back to the show at some point in discussing the greatest PPVs of all time. If there was an encyclopedia entry for “WWF style” of main eventing, Rock vs. Austin WMX7 would be the case study. I loved Benoit vs. Angle, the McMahon street fight, TLC 2 with one of the most perfectly booked overbooked endings ever and a great match between HHH and Undertaker.  You’ve also got the awesome gimmick battle royale, a really fun hardcore garbage wrestling match and a solid opener with Chris Jericho and William Regal. When those two are opening for your card, you know you’ve probably got something good going on. I could go on and on about what makes this card so special, but if you’re reading this article you’ve probably seen it a million times. What’s really underrated about the event to me is how gigantic and important it seemed on TV. You could feel the electricity in the air and even when you watch it this many years later, you can just feel all of the right pieces clicking…I don’t know if there’s such a thing as a perfect wrestling event, since even here, there’s a couple of matches I had forgotten about (the RTC tag and Test vs. Eddie Guerrero), but by the time you finish the show you just had to exhale. I’ll say I absolutely hated the Steve Austin turn at the end, but the match was so good I can’t even let my disdain for the turn ruin my memories of the card as a whole. Luckily, by 2001, Austin had entered a rarified air where he could say he was going to kill puppies on TV and the crowd would still cheer for him, booking be damned, so I did too, even if he sold out.

What’s your pick for a “hidden gem” in the Network’s PPV library?

Andrew: I feel like a lot of WCW’s really great shows in the early 1990’s were all hidden gems when it comes to how familiar most of today’s fans are with pro wrestling as we know it. Sure, the nWo, Goldberg, and the Crow-like Sting are the most noteworthy figures in WCW’s history as time goes by, but once upon a time, back when WCW had just lost Nature Boy Ric Flair and his World Heavyweight Title to the WWF, the good ole boys in Atlanta hired Mid South Wrestling mastermind Bill Watts to put some grit and work rate back into Turner’s outfit. Although wrestlers themselves did not like Watts, the shows were better than ever at WCW. They put on a trilogy of pay-per-views at the start of 1992 that rival any other one you can think of, including the WWF in 2001. The third show from that year was Beach Blast 1992 in Mobile, AL.

The Network is likely to keep Jesse Ventura on color commentary, and he was great alongside Jim Ross at WCW as they called the action for one of the best cards the company ever put on. Sting and Cactus Jack had a wild brawl on the entrance ramp and the floor more times than in the ring. It really put over Mick Foley as a different kind of guy. Madusa and Paul E. Dangerously plotting to cheat in the bikini contest against Missy Hyatt was hilarious, especially when Jesse continuously ran down the (ahem) feminine Johnny B. Badd. Rick Rude and Ricky Steamboat had an Iron Man match so good that I still think it is the best one ever done for that stipulation. Even Scotty Flamingo (a.k.a. raven) and Brian Pillman got a lot of air time (and, in Pillman’s case, a crash landing on the ramp to lose the match) when they wrestled for the Light Heavyweight Championship. People disliked the show because the main event was a tag match that ended in a draw, but you get 30 minutes of the young Steiner Brothers and the Miracle Violence Connection (Steve Williams and Terry Gordy) beating the crap out of each other, so I had no complaints there. The show was quickly forgotten in the annals of WCW lore and WCW’s DVD compilations, but trust me, you will not be disappointed when you see this one.

There are plenty of others in WCW that I would consider diamonds in the rough such as Spring Stampede 1999, Souled Out 1998, Slamboree 1994, or SuperBrawl II. WWE’s list is even longer and more varied across their platform, from Judgment Day 2000 to St. Valentine’s Day Massacre 1999 to Vengeance 2005 to SummerSlam 2011. But the one show I want to mention that might have fallen through the cracks at the time is Backlash 2007. It was in Atlanta, GA, and it included all three brands (Raw, Smackdown, and ECW) going forward. It was also following up a pretty good WrestleMania 23 show but, in some ways, it may have outdone the grand daddy of them all. Backlash had two terrific main event title matches: a Fatal Four Way with a rapid fire ending and what I still think is Batista and The Undertaker’s greatest match against one another. Chris Benoit continued to show MVP the ropes in their feud with an excellent match. The Hardy Boys started things off with a good tag titles defense against Lance Cade and Trevor Murdoch. Even the women’s match between Melina and Mickie James was hard-hitting fun (The less said about Vince McMahon winning the ECW Title, the better). Backlash 2007 was a perfect example of stripping the politics and fluff out of a mega card, and just putting on a damn good show. 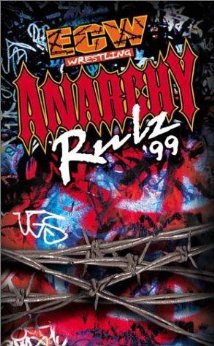 Todd: There are a lot of shows between the big three companies that fall through the cracks. St. Valentine’s Day Massacre is a good example of a show that was earth-shatteringly important to me as it aired, but is mostly a distant memory in the annals of WWE history. I know I plan on watching a lot of 80s WWF and WCW that I’ve never really gotten to watch in full, which will be great in really expanding my horizons, but for this question I’ll go in the direction of the original ECW. Looks like we’ll only be getting the run of ECW PPVs from 1997 onwards, since (I think) everything before Barely Legal was run in some sort of syndication or tape or something…I’m not from the Northeast so I didn’t get ECW regularly until TNN. Speaking of TNN, my choice, Anarchy Rulz ’99 was the first ECW PPV after they had inked their first national TV deal. This PPV accentuates what I love and hate about ECW. There are a ton of ECW matches I could watch until the end of time, but man, did I not care about their characters or booking. Seriously, I can’t tell you a single time I watched ECW for something besides awesome wrestling and unadulterated violence. To give you an example of how little everything besides the wrestling mattered at this point in ECW’s history, I am pretty sure what actually aired on PPV was almost entirely different from what was advertised on their national television show…yeah. Either way, there’s a lot to love about the show, with a freaking awesome opener with Lance Storm and Jerry Lynn and the triple threat between Tajiri, Super Crazy and Little Guido, one of my favorite ECW matches ever. You’ve also got a pretty great match between Mike Awesome, Masato Tanaka (always great when these two meet) and Taz, who was on his way out to the WWF. Somehow, RVD pulls a really good match out of Balls Mahoney for the ECW TV Title in the main event. The fact that the TV title was in the main event over the world title should tell you all you need to know about ECW’s booking at this point, but the wrestling is outstanding and worth a watch. If you’re not going to go cliché with Heatwave ’98 or Barely Legal, check this one out.

Desperately trying to climb out of the pits of hell, the WWF put out a great show in Survivor Series 1996, which has an outstanding Bret Hart vs. Steve Austin match that would only be outdone a year later but, as it stands, is one of the best matches of the year and better matches I’ve ever seen. I think it’s mostly glossed over in discussing both Hart and Austin’s careers, but it was the first time fans could see just how well the two worked together, instant classic match in my opinion. The main event between Sid and HBK was also outstanding, Michaels really put in a dedicated performance against Sid in what’s just an amazing David vs. Goliath type match. I also believe this match was only released by WWE on an old HBK VHS that’s long out of print. And while we’ve seen better from the two, Mankind and Taker put on a pretty solid match. In an up and down year for the company, Survivor Series was one of the more complete cards the WWF had in 1996.