Andrew: A familiar face is back at the top after a lengthy absences as the Notre Dame Fighting Irish went undefeated in the regular season in Brian Kelly’s third year there. Like Alabama and LSU last year, they carried their weight on the defensive side (giving up only 12.8 PPG) with linebacker Mantei Tei’o as their de facto leader. They played Stanford and Michigan at home and Oklahoma and Michigan State on the road, all to victories. The #1 team most of the season was defending national champion Alabama, who lost Trent Richardson and some NFL defensive talent but still had a dominant offensive line and a defense to die for. The Tide started out with a blowout against Michigan in Arlington and then had an inspired comeback win at LSU, but a week later, they were upended at home by Heisman Trophy-winning quarterback Johnny Manziel and the Texas A&M Aggies. Thankfully for Bama, they still won the SEC West while the teams in front of them (Kansas State and Oregon) lost in mid-November. Florida had only one loss all year, but that loss was to the loaded Georgia Bulldogs, so it was Alabama and Georgia in an SEC Championship Game for the ages that ended with an exciting 32-28 win for Nick Saban’s guys. Stanford won the Pac-12 Championship Game, but they lost to Washington and Notre Dame, so they had to go to the Rose Bowl. Ohio State went undefeated but were not eligible due to a bowl ban, and many thought that one-loss Alabama would have jumped them anyway. The SEC, once again, was stacked with great teams like Alabama, Georgia, Florida, LSU, South Carolina, and Texas A&M. Florida State was one of the best ACC teams in a while, also, but they let one slip away at N.C. State and lost at home to Florida in the last week of the regular season. And in the last year of existence for Big East football, Louisville won the conference before shockingly beating Florida in the Sugar Bowl.

Greg: I don’t think anyone would dispute the top team. Notre Dame was undefeated and had one of the nation’s top defensive units. At #2, Alabama clearly belonged, after having arguably the “best” loss of all the one-loss teams, a one-score loss at home to an excellent Texas A&M squad and the country’s best player, Johnny Manziel. Numbers 3 and 4 are more difficult, perhaps the most difficult of the years I’ve voted on. I firmly believe Georgia was the second best team in the country in 2012. However, the best isn’t always the most deserving (see this year). The Dogs got slaughtered at South Carolina in an aberration game, then lost the best SEC Championship Game (and one of the best games I’ve seen, period) of all time against the Tide. Oregon’s only loss was in overtime to a terrific Stanford squad, but the Ducks also played in an exceptionally weak Pac-12 and managed to avoid UCLA that year. The Gators, meanwhile, lost head-to-head against Georgia but quietly put together one of the country’s best resumes, including a win at Florida State and a dominating victory over a good South Carolina team. Florida slides in at 3, which leaves a three-team race for 4 between the Bulldogs, the Ducks and the K-State Wildcats. Colin Klein’s bunch played the weakest schedule of the group and got slaughtered in their only loss, so they’re out. Georgia’s most impressive wins were Florida and Vanderbilt, which were better than any two wins Oregon had, but Oregon had a much better loss. On the other hand, Georgia played in the toughest conference and was playing its best ball at the end of the season, while Oregon had lost some momentum after a late-season loss to Stanford. In the end, I have to give Oregon a very slight edge based on resume, even though I think Georgia would have handily beaten Notre Dame or Oregon. (1. Notre Dame, 2. Alabama, 3. Florida, 4. Oregon)

Nick: I’ll go ahead and get this one out of the way first. I’m going to be a homer and put Georgia at No. 4. Sure, they had a couple blemishes, but they pushed Alabama to the brink in a virtual play-in game for the title, and they beat Florida head-to-head. Plus, and this can’t be emphasized enough, Florida’s offense was AWFUL. They wouldn’t have beaten any of the contending playoff teams anyway. Notre Dame and Alabama are your top two teams with very little debate, leaving only the No. 3 spot up for grabs. Oregon’s only loss was in overtime to Stanford, so I’ll give the Ducks the nod here. (1. Notre Dame 2. Alabama 3. Oregon 4. Georgia)

Andrew: Okay, so maybe Notre Dame was not as good as Alabama was like most suspected (or as good as Oregon, or Florida, or some others). But undefeated is undefeated, and they did beat some quality opponents like Oklahoma, Miami, Stanford, and Michigan, so it was a respectable resume enough to not get toppled by a one-loss team. Alabama, to me, was the best team that year anyway, so #2 at worst is my ranking for the Tide. Florida is a solid pick at #3 despite their really bad quarterback play because their defense was so good and they only lost in a tight game to Georgia. For the Oregon Ducks, turnabout is fair play as Stanford, in our previous ranking, got the nod in the Final Four over them because they only lost once while Oregon lost twice. This time, it’s Stanford with two loses while Oregon sneaks in. I have to take Oregon over Kansas State because the Big XII that year was slightly weaker and Colin Klein and the Wildcats got embarrassed by Baylor in a 52-24 loss. Oregon’s only loss was 17-14 to Stanford in overtime. (#1 Notre Dame, #2 Alabama, #3 Florida, #4 Oregon)

The Decision: We settled quickly on the top two as it was originally conceived with Notre Dame at #1 and Alabama at #2. Then it gets tight as Oregon gets the #3 spot and although Greg and Andrew voted Florida third, the Gators winds up with #4 due to Nick omitting them from his list.

Greg: I love both these games, because I think both are close, interesting match ups. The SEC was so clearly the best conference last year that I’m tempted to take Florida in a blowout. However, as Nick pointed out, this Gators offense was atrocious and Notre Dame had a very good defense (don’t let the Alabama game fool you). Points would have been at a premium in this Fiesta Bowl, and it may very well come down to the leg of Caleb Sturgis. However, I think Jeff Driskel commits a big turnover that proves to be the difference in the game, giving Notre Dame an ugly 12-9 win. Of course, Florida’s sheer physical advantage would also be interesting to watch. Really tough game to call. Oregon-Alabama would be the real national championship game, in my view. Chip Kelly against Kirby Smart and Nick Saban would be one of the best coaching battles of the B.C.S. era, and it would’ve been a true test to see how Marcus Mariota matched up to Johnny Manziel, who had a great game against the Tide. In the end, if you want to see how this game turns out, watch Stanford-Oregon from last year. Alabama was a bigger, stronger, faster Stanford with a much better quarterback. Eddie Lacy causes a lot of problems for Oregon’s front seven, and the Tide wins 31-21.

Nick: Ugh. For all the people who complained about SEC football that gave us games like LSU/Alabama’s 9-6 regular season meeting in 2011, Notre Dame vs Florida wouldn’t have been half as watchable as that game. The two teams would have set offensive football back 30 years, and I guess one of them would have eventually wound up winning in the end. I guess if I have to pick between two teams with “3 yards and a cloud of dust” mentalities, inconsistent mobile quarterbacks and stout defenses, I’d have to take the stout SEC defense. Florida beats Notre Dame 6-3. The true national title game, meanwhile, would have pitted Alabama against Oregon. This would have been one of the most-watched college football games ever, with everyone wondering if Alabama could slow down the Ducks’ high powered offense. If it were Alabama’s 2013 defense, I’d likely have taken Oregon, but it’s easy to forget just how talented the 2012 Alabama D really was. I’ll take Alabama, but in a close one. 27-24.

Andrew: Given the struggles Chip Kelly had with SEC opponents historically, you’d think that Alabama has their match-up with Oregon made in the shade. But remember that the quick-spread offense that Oregon runs is the exact same kind of attack that is most successful against Nick Saban’s power-dependent defenses. I say Alabama needs some offensive fireworks late to beat Oregon. As for Notre Dame and Florida, Everett Golston was slightly better than Jeff Driskel. But Florida’s defense was faster and more capable of causing turnovers, so I will give Florida the nod here. I would think the Gators would have played a lot harder here knowing they had a shot at the title than they did in a meaningless Sugar Bowl game against Louisville.

Greg: This could get ugly. Florida had a fast, athletic defense and a pathetic, miserable offense. But Alabama’s 2012 offense was a step above its 2011 predecessor, and I think Eddie Lacy, AJ McCarron and Amari Cooper have huge nights as Bama blows out the Gators 27-9.

Andrew: Well, well, well. A second year in a row with an all-SEC match up for the national championship. Alabama and Florida played each other in the Swamp the previous season, and it wasn’t pretty for Gator fans. But the defense had grown up significantly and Mike Gilleslie and Jordan Reed were serviceable offensive weapons. But Georgia is a great barometer because they played both teams that season, and although both games were close, Bama had much more success against the Bulldogs defense than Florida did. I will take Alabama 21-10 to win the national title.

The 2012 B.C.S. Busters Champion is… the Alabama Crimson Tide! 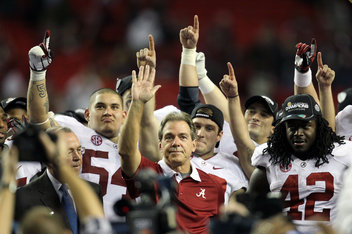