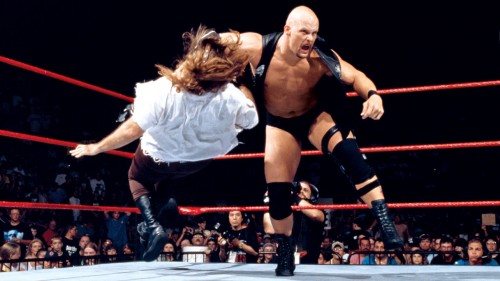 If this wasn’t our easiest vote, I’m not sure what was.
Frankly, I don’t even remember if we formally voted. What would be the point? With all due respect to the peak of the Goldberg phenomenon, there just isn’t another reasonable choice for the best wrestler of 1998. In wrestling, sports, or any other form of entertainment, few performers have ever owned a year in their field the way Stone Cold Steve Austin owned 1998 in professional wrestling.

Coming off of a rocky, if critically acclaimed, end to 1997, spirits remained low and ratings well behind WCW Monday Nitro after the Montreal Screwjob at Survivor Series in November. It would be several more months before the seeds of that real-life event bore the fruit of Vince McMahon’s transcendent heel character, one that would eventually become Austin’s perfect foil. But in the fallout, the remarkable rise of Steve Austin was one of the few bright spots after Bret Hart’s departure to WCW.

As the calendar turned to 1998, Stone Cold as a mainstream cultural phenomenon began to take shape. Austin 3:16 shirts were everywhere. Raw, which had trailed Nitro in the ratings for well over a year consecutively, began regularly winning Monday nights as Nitro’s victories became fewer and much further between. Raw is War was improving across the board, but let’s not overthink why the WWF eventually won Monday nights: it was because of Stone Cold Steve Austin.

In ring, it certainly wasn’t the best year Austin would have from a technical standpoint. After his broken neck suffered in a SummerSlam ’97 match with Owen Hart, his style was limited to safe brawling that would loosely become known as the “WWF/E Main Event style.” Still, and despite his primary feud being with McMahon, with whom he wouldn’t officially meet in a match until February 1999, he produced memorable matches with Shawn Michaels (also greatly limited by injury) at WrestleMania 14, followed by programs with Mick Foley, the Undertaker and Kane that would yield months of tremendously fun brawls.

Much as Hulk Hogan’s cartoonish physique, even less realistic persona and patriotism bordering on xenophobia tapped into the cultural zeitgeist of the 1980s, so too did Austin’s nihilistic antihero escapades in the late 1990s. The Rock would go on to even more mainstream fame in Hollywood, but he could never quite match the overwhelming popularity of Austin during their days as full-time wrestlers. No one could, before or since.

And that’s the bottom line. 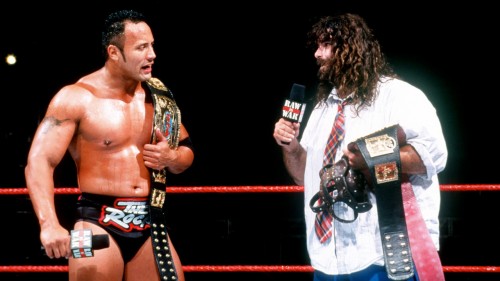 He fought it as long as he could, but 1999 was when we were finally invited to “Sing Along with The Rock.”

Having already shown how quickly his star was ascending with the enormous babyface reactions he received in the latter half of 1998 while still technically a heel, The Rock’s coronation as the true People’s Champion he always claimed to be was put on hold at Survivor Series ’98 as he joined the McMahons in being gifted his first WWF Championship.

From there, the newly-christened Corporate Champion engaged in a memorable feud with Mankind. The Rock and Foley traded the title several times throughout the first several months of 1999. The Rock eventually emerged the victor of the feud to move on to defend the title against Stone Cold Steve Austin at WrestleMania XV. It wasn’t the first chapter of their storied rivalry, and it wouldn’t be the last. But while Austin’s star had already ascended with his WrestleMania win the year before and incredible run throughout 1998, even in defeat this was The Rock’s final passage into that same rarefied air.

After the WrestleMania main event, The Rock’s days as a heel were numbered: there was no denying the babyface pops that, even before his turn, were beginning to rival Austin’s. Following Austin’s successful title defense in their rematch at Backlash a month later, The Rock called out Shane McMahon and left The Corporation. This kickstarted one of the top three babyface runs in WWF history, rivaled only by Austin and Hulk Hogan.

Strictly from an in-ring perspective, the rest of 1999 wasn’t particularly memorable for The Rock; his astonishing improvement to elite status as a pure worker was still a year away. Aside from he and Triple H renewing their in-ring rivalry at the main event level, The Rock’s singles feuds the rest of the year were forgettable turns with The Undertaker, Billy Gunn (which at least gave us the memorable “Are you there, God? It’s me, Billy” promo along with the genesis of the “It doesn’t matter…” catchphrase), Al Snow and the British Bulldog.

But from a character perspective, his pairing with Foley in the Rock ‘n’ Sock connection was one of the most entertaining, albeit short-lived pairings in wrestling history. The duo’s “This is Your Life” skit on the Sept. 27, 1999 Raw was one of the highest-rated segments in the show’s history.

It certainly wasn’t unexpected, given his meteoric rise throughout the latter half of 1998. But in 1999, as he was before, and will presumably remain so until the end of time, The Great One was nothing short of electrifying. 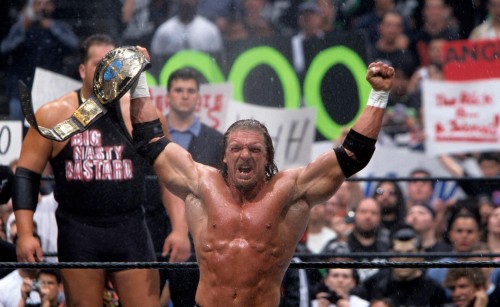 Before we reached the end of the 20th century, Triple H’s ascent to the top of the WWF in 1999 was met with mixed reviews. His coming out party as a character began after he turned on his brothers in buffoonery at D-Generation X at WrestleMania XV and joined the Corporation alongside Chyna. It became clear that Vince McMahon and company were determined to push the former Hunter Hearst Helmsley as a top singles wrestler when he won the WWF Championship from Mankind in August of 1999, but fans still were unsure if he really had to chops to run with the ball the same way that Steve Austin, the Rock, the Undertaker, and Mick Foley had done the previous two years. When Austin went out with a year-long neck injury in November of ’99, the WWF was forced to move forward and keep the record-ratings momentum going into the year 2000 with Rock as the company’s top babyface and Triple H as The Game, a cerebral, manipulative heel with the freshly minted bad girl, Vince’s daughter Stephanie, by his side for the power trip of a lifetime.

2000 began with the storyline of Rock and Foley versus the McMahon-Helmsley era as Triple H won the title from in Big Show in January. The WWF product was more popular than ever, but Hunter knew that despite his self-confidence as someone who could carry the company in Austin’s absence, he needed to step up his game in order to truly become The Game. That break came at the Royal Rumble in Madison Square Garden when he faced off with Cactus Jack in a brutally violent Street Fight and one of the greatest matches of the Attitude Era. Triple H was given the honor to “retiring” Mick Foley in a Hell in a Cell match at No Way Out and then successfully defending the championship in the main event of WrestleMania with Vince McMahon by his side. Behind the scenes, Vince always knew he had something in Jean-Paul Levesque, but it was his transformation as a splendid nightly performer in 2000 that made a whole ‘lotta believers for Triple H. Although Vince was the true antagonist of the Attitude Era, he had had trouble finding a true-to-the-title bad guy who couldn’t give the fans anything to slightly root for despite his individual greatness. While Rock and Austin were “cool” heels, it was Triple H that put the old school vibe into the brave new school of the WWF into the new millenium.

Triple H’s rivalry with The Rock over the WWF Championship was one of the greatest ever, producing a variety of great one-on-one and multi-man matches week after week. While most fans revere his face-offs with the Rock the most during that time, his matches with Mick Foley at the beginning of the year were some of the best in the Hardcore Legend’s career. His feud with Chris Jericho created one of the biggest shocks in Raw history and later created the template for what we know now in WWE as the Last Man Standing match. He became so consistently good in the ring that even television matches against lesser opponents like Tazz, Taka Michinoku, Rikishi, and Kane became must see TV. Even some poorly booked matches with a returning Steve Austin late in the year could not derail the hot streak that Triple H was on by the time 2000 had come to a close. While he wasn’t the most muscular or brash of characters at that time, Triple H provided an intensity as an in-ring performer that harkened back to the glory days of Randy Savage or Ric Flair, a true heel who could hang with the best of them on any given night because he was, well, that damn good. As the entrance song later said, “It’s all about the game and how you play it.” In the year 2000, nobody played the game better than Triple H did.