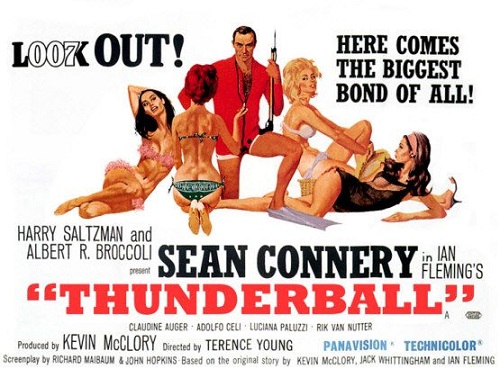 Plot: James Bond (Connery) continues on his fourth mission, with his aim to recover two stolen warheads.  They have been taken by the evil SPECTRE organization. The world is held hostage and Bond heads to Nassau. Here, he meets the beautiful Domino (Auger) and is forced into a thrilling confrontation with SPECTRE agent Emilio Largo (Celi), on board his boat, the Disco Volante. Will 007 prevent the killing of millions of innocent victims?

Plot/Bond Performance: James Bond is back on the beach in his fourth big mission, and Connery is again at the top of his game.  The plot is simple enough:  Evil group SPECTRE will blow up Miami Beach if a ransom is not paid by NATO.  The story is easy to follow and climaxes with a dramatic underwater battle between Largo’s henchmen  and the US Navy with Bond at its side.  Connery rips off some good lines and beats the hell out of everyone that gets in his way.  The actor that played Felix Leiter (Rik Van Nutter) was not as humorous as Cec Linder was in ”Goldfinger”, but he was serviceable and is a good help to Bond in this mission.   M, Q, and Moneypenny make their customary appearances, in fact this is the only movie where all the 00’s are shown on camera.  A solid plot and another great Connery performance. Grade: 8

Women: Claudine Auger played  the voluptuous and innocent Domino, Largo’s lover and sister to the dead NATO  pilot.  Her voice, like Ursula Andress in “Dr. No” was dubbed over because her French accent was way too thick.  She was very timid and at times showed little emotion.  It took until she found out that Largo killed her brother that her character really took off and became a vital part of the story.  I personally liked Palluzzi as the evil but smoking hot Fiona Volpe.  She unfortunately takes a bullet from her co-worker, but that was expected.  Molly Peters as Bond’s buxom blonde masseuse fills out the trifecta of beauties (one blonde, one brunette {Auger} and one red-head {Palluzzi}).  A good cache of Bond women in  one of the series’ visually pleasing best. Grade: 9

Villains: After taking a movie off, SPECTRE returns to raise havoc internationally.  Celi is awesome as Largo, officially he is second in command of SPECTRE behind Blofeld, so this is big time.  His devious smile and personal pool of bloodthirsty sharks makes him one of the series’ top 5 villains.  His top henchman is the bald Vargas, who almost sneaks up and kills Bond on the beach in one scene, but Bond takes him out with a harpoon, which leads to the line of the movie:  “I think he got the point….”  That leads to the continuous trend of Bond snapping off a good line after killing the top henchman of the bad guy.  Anthony Dawson plays Blofeld again (well his legs and hands anyway) as he leads the board meeting of evil in the beginning of the film.  For the third straight film a top level cache of villains for 007 to battle.  Grade: 9

Gadgets: The awesome Aston Martin DB5 makes a cameo in the beginning of the film as Bond drives away from the French chalet, but the gadget most remembered is the Bell Textron Jetpak that he escapes the chalet from.  A gadget very much ahead of its time, even with the geeky helmet Bond’s wearing.  Must have all safety measures, you know.  He also uses a Rolex watch that doubles as a mini Geiger counter to help find the stolen nuclear warheads.  Plus a few underwater do-dads that help Bond in the battle with Largo’s men.  Not too bad, but without the DB5 appearance in the opening sequence this grade would be much lower. Grade: 6.5

Scott’s Take: Another home run for the Bond series, complete with beautiful women, gorgeous Nassau beaches, evil plots involving genocide and extortion, and some snappy dialogue.  Connery was at his best again as Britain’s #1 spy, and although the cast was not as charasmatic as in “Goldfinger” they definitely carried their end of the story.  “Cubby” Broccoli and Harry Saltzman, the series’ producers, really hit their stride with this one, and the next one will be just as successful.  Although the rumblings had started after shooting of ”Thunderball” that Connery was tiring of the role, you couldn’t tell with this  performance.  This film was originally supposed to be the first one of the series, which would have been fine, and you would think it would be tough to follow up “Goldfinger”.  However this one held its own and is one of the most popular in the series.  Final Grade: 42.5