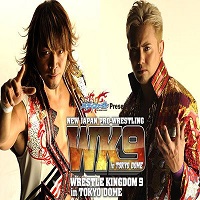 Will is joined by Pete and Johnny (Titans of Wrestling), Dylan Hales (Wrestling Culture) and documentary maker Johnny P to discuss Wrestle Kingdom 9! We run down all the matches, give a little bit of background on the wrestlers and mispronounce a bunch of names! This is NOT a show for hardcore New Japan fans but a great listen for people who want to know what all the fuss is about.

Be sure to check out our additional Wrestle Kingdom 9 coverage here at PTBN – a live stream of consciousness on each match from Chad (Where the Big Boys Play), Pete (Titans of Wrestling) and Steven (Pro-Wrestling Super Show).