Welcome to October, boys and girls. This month I’m looking back at DC’s September event, where they suspended their usual titles’ production and substituted special issues featuring the villains of the DCU instead. This promotion ties into their flagship crossover title, “Forever Evil”, the first issue of which I reviewed last month.

Here’s a list of the books that came out: 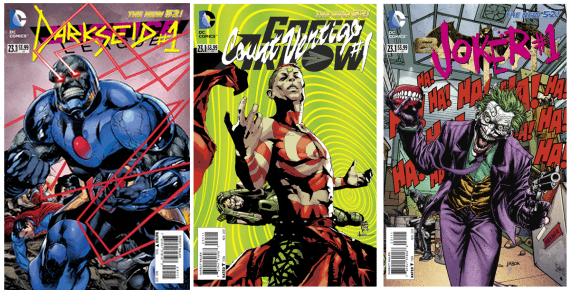 Wow, that’s a lot of books. Fifty-two comic titles were released in all, to match DC’s New 52 initiative of fifty-two monthly in-continuity books. Each book was offered in two editions, one standard version for $2.99, and one motion 3-D cover for $3.99. The 3-D covers were printed in extremely limited quantities, and most stores sold out of these almost instantly. Some of the 3-D books are fetching upwards of $20 on eBay. I have to give DC credit- the 3-D covers look amazing and are obviously highly coveted. My particular comic shop didn’t even get enough 3-D covers to supply their comic savers, leading to an outcry amongst Sacramento nerds.

Notice that DC’s best selling titles (the Batman and Justice League books) had up to four tie-in issues each, while books like Batwing and Animal Man had no villain tie-ins whatsoever-and therefore no issue this month. Therefore, if you’ve got the collector mentality, and most comic fans do, you’d have 16 books in the core Batman titles to purchase. Now, nobody’s holding a gun to anyone’s head to buy all of these, but DC knows how the base of their readership think.  Gotta have them all!

Furthermore, they used a decimal system to label each book. When filing the comics (and part of the joy of collecting comics is organizing them), it may look just not right to go from “Justice League” #23 to #23.3. Our collector’s obsession demands that we have all the gaps in our collections filled. I faced a similar quandary in 1994 when DC released “Zero” issues. It may have intended for collectors to file zero issues at the numeric start of their collections, but it looks bizarre to go from “Action Comics” #0 (a contemporary title) to “Action Comics” #288 (released in 1962). Ah, the problems of anal-retentive comic book nerds. With over 25,000 comics in my collection, keeping them organized is a never-ending battle for truth, justice, and the American way.

Because I love my wife and children, I did not purchase all fifty-two comics. Instead, my strategy was to stick to the books tied-in to titles I normally collect and buy only the ones written by the series’ normal author, or books featuring a character I really enjoy.   This was something of a pain, because DC didn’t provide credits for the books on their covers. (It was apparently too hard for me to look on the internet each week to see who wrote what). The books I ended up buying were: Black Manta, Ocean Master (remember, I loves me some Aquaman), Ventriloquist (because of Gail Simone), Joker (I mistakenly assumed it was going to be written by Scott Snyder, so the joke’s on me), Riddler (actually done by Snyder), Count Vertigo (written by excellent Green Arrow author Jeff Lemire), Darkseid, Secret Society (written by Captain DC, Geoff Johns, & tying closely into “Forever Evil”), Black Adam (also by Johns), Lex Luthor, and Cheetah. I requested First Born, but my store had already sold out. 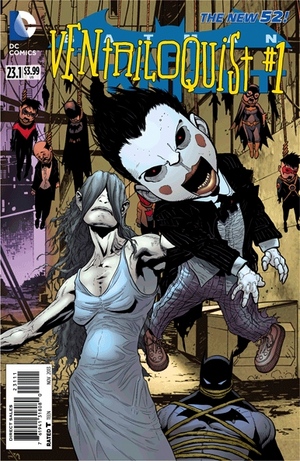 I was lucky enough to get the 3-D editions for Black Manta, Ocean Master, Joker, Riddler, Count Vertigo, Darkseid, and Cheetah. I must say again how striking the covers look in person, and I’m currently scouring other Sacramento comic shops for more of these amazing things.

Story-wise, the books run the gamut from weak to pretty good. On the poor end of the spectrum, I was expecting Joker to be much better than it turned out being. I would really have preferred Scott Snyder to have written this story, but Andy Kubert’s ego dictated that he write it instead. Kubert should stick to his artwork, as this tale was the embodiment of “meh”.

On the opposite end, Lex Luthor was really good. Charles Soule wrote a story (that immediately precedes “Forever Evil” about just how many steps Lex is ahead of everyone else. I wonder if my rooting for the heels in professional wrestling has rubbed off in my admiration for the bad guys in comics. They’re just fulfilling their function, after all, and a hero is only as good as his villain. 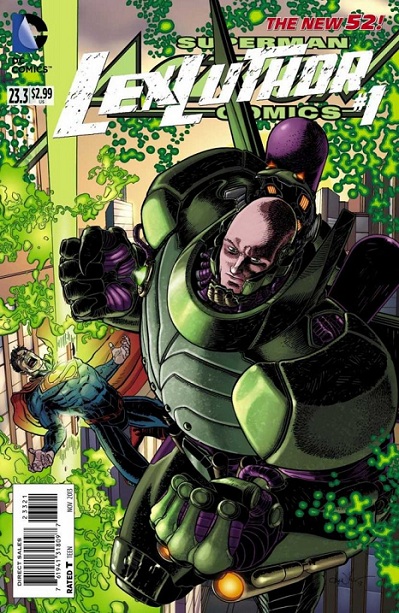 Also good were the Aquaman tie-ins (Black Manta and Ocean Master) and Green Arrow’s nemesis Count Vertigo. I’m a fan of B-List DC heroes (and always have been, dating back to my homemade Hawkman halloween costume in sixth grade) and these titles worked well in fleshing out the worlds of Aquaman and Green Arrow.

Overall, I’ll say that Villains Month was likely a success for DC, but drove myself and other collectors a bit crazy. I’ll probably keep hunting down the titles I didn’t get initially just for completion’s sake, but I know that quest will keep me busy for some time. Still, I’m really happy with the books I purchased, and I can’t stop looking at the damn 3-D ones.

So, congratulations to DC for getting people to buy more funnybooks than they usually do. See you next time.