Welcome to a groovy Tuesday and it’s time once again for “Weber Has Issues”, where we immerse ourselves in brand new comics that are “new reader friendly”. This week we’re yet again checking out a new Vertigo #1 issue as well as the latest comic featuring everyone’s favorite time-displaced mutant teenagers, the All-New X-Men.

Jeff Lemire is a writer whose star is on the rise at DC comics; he’s behind the successful revival of Animal Man, he oversees the magical corner of DC with “Justice League Dark”, and he’s the caretaker for the DC universe-based version of DC’s latest televised property, Green Arrow. Meanwhile, in DC’s mature line of comics known as the Vertigo imprint, Lemire wrote and illustrated the not-for-everyone creator-owned book known as “Sweet Tooth”. As someone who fell into the “Sweet Tooth is not for me” category, I was pretty skeptical whether “Trillium” would be up my alley.

Trillium #1(Vertigo Comics, $2.99) written and drawn by Jeff Lemire, is one weird-ass comic book. (Well, there goes my chance at getting a cover blurb on the inevitable trade paperback release). This issue is a flip-book, with half the story taking place in the rather distant future of colonized outer space, and the other half (after you literally turn the book over) taking place post WWI (think “Downton Abbey”‘s timeframe, which is fresh on my mind because my wife holds a metaphorical gun to my head and forces me to watch the perverse bourgeoisie ramblings of Maggie Smith). What could these two stories possibly have in common? To tell you would be to reveal the twist which makes this comic interesting; before the unexpected turn, one wonders what the whole point of it all is. In each tale, we follow a quest from each side’s respective main character, and there are certainly parallels between the past and future stories.

Both unique lead characters revisit tragic circumstances before searching out their particular treasures: our scientist/astronaut, Nika, is out to find the rare flower known as Trillium which will lead to preservation of humanity from warlike invaders; the flip-side’s William is a WWI vet who joins an Amazonian expedition in search of a lost Incan temple. The stories are fairly straightforward until they each hit a twist, but the twists themselves are enough of a hook that you’ll want to come back (I went from all “meh” to all “yeah” in the blink of an eye). 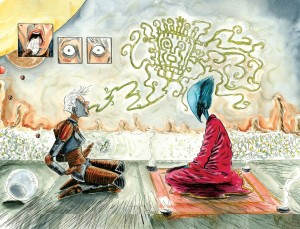 Lemire’s writing this clearly knowing where it’s all going to end up, since this is a limited series (it’s only advertised as a mini-series, with no set finish point, but I suppose that could mean up to 12 issues). The book honestly seemed unremarkable until the hooks, but oh, what hooks they are, and I’m definitely coming back to see how both stories unfold. The art for both stories was fine; Lemire draws in a highly stylized manner, but his own coloring (I believe he’s using a digital equivalent of watercolors) softens the harsh angles that turned me off “Sweet Tooth” and gives both stories of the comic quite a lovely look.

This book is yet another success from the revitalized Vertigo. DC’s got to be happy with what’s going on over there (though for the most part, it’s own books in the New 52 are a chaotic mess that we’ll talk about soon). Trillium continues Vertigo’s momentum with brave and uncharted storytelling, and Jeff Lemire remains a creative force worth your respect.

WHO WOULD LIKE THIS: Fans of heavy-duty science fiction such as Theodore Sturgeon’s “The Golden Helix”, fans of “Animal Man” and “Swamp Thing”, people looking for something totally different, people who enjoyed the concept of “Avatar” but wished for more character development.

Is there any character involved with the X-Men who didn’t fall for Jean Grey/Marvel Girl/Phoenix at one time or another? Over the years, we’ve been subjected to romantic plots involving Jean with Cyclops, Wolverine, Angel, Professor X (!?) and now the Beast. You’d think she was the only girl in the school or something!

Furthermore, it’s been speculated that Jean Grey’s presence in X-Men has led to many fanboys’ obsession with red-haired women, though I myself would never judge a woman based solely on her hair color and it’s merely a coincidence that seven of the last eight girls I dated before getting married happened to be redheads. Ahem. Moving on.

Poor Lorna Dane. Green-haired girls always end up being the “girl with the nice personality”.

I’ve been reading “All-New X-Men” since its debut and have enjoyed the novelty of seeing the original five X-Men having to reconcile with their present-day counterparts. If you haven’t been reading, there’s a nifty recap page in front that gets you all caught up with what has gone before. Marvel certainly makes catching up with current continuity as easy as they possibly can. 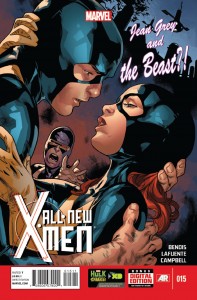 “All-New X-Men #15” (Marvel Comics, $3.99) by writer Brian Michael Bendis and artist David Lafuente follows the temporally-displaced adolescent mutants after one of their own decides to “defect” to one of the adult teams of X-Men (stop reading now if you don’t know who the defector is). The remaining four originals deal with this in their own ways, with Cyclops and Iceman going off to pick up some babes at a carnival and Jean and Beast conveniently left all alone to deal with their growing attraction to one another. 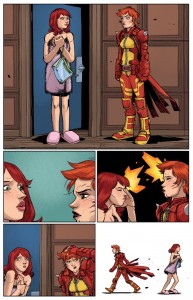 There are also some nice moments with Wolverine and the grown up blue and furry Beast, and the Bobby & Scott at the carnival story is kind of fun.  The romantic moments between teenage Hank and Jean are appropriately awkward and sweet, but they really need more female characters (or more Jean Grey clones). The story was fine, Bendis is always an excellent writer of dialogue and “All-New X-Men #15 is no exception.  There’s only one problem: The art for this issue makes the main characters of the story (the X-Men from the past) look like they’re cartoonish stumpy pre-teens.

The series’ regular artist, Stuart Immonen, is off for this issue, and Lafuente draws these 15-17 year-olds as though they’re children. The entire look of the book is simplistic and “off”, and if read in sequence with the entire run of “All-New X-Men” you’d swear you were reading a whole new series. The art evokes “Runaways”, an excellent teen Marvel teen title by Brian K. Vaughn that ran ten years ago, but why’d they do this? I can easily imagine Immonen drawing this script and giving the story a weight that Lafuente just couldn’t muster. This book read more like (groan) “Ultimate X-Men”, and to paraphrase the cultural icon Diamond Dallas Page, that’s not a good thing, it’s a bad thing. 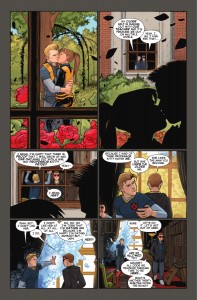 I hope Stuart Immonen comes back soon, or I may consign “All-New X-Men” to the “All-New dropped-from-my-saver” list. I had such high hopes based on that cover (drawn by Stuart Immonen, naturally).

WHO WOULD LIKE THIS: fans of inappropriate art choices, teen romance aficionados, fans of “Runaways”, people who like “Ultimate Spider-Man” (what’s up, Nick Duke), fans of “Boy Meets World” and other teen Disney shows, and certainly not Todd Weber-who has issues.

I recommend buying comic in person whenever possible and supporting your local comic book brick-and-mortar store (visit mine at facebook.com/pages/A-1-Comics-Inc/143922524867) or by using Comicology’s nifty comic-reading app. To find a comic shop near you, call 1-888-COMIC BOOK.