A very Happy Halloween to you, Weber Has Issues readers. I am your host, Dr. Fritz von Weber and this week we’re going to take a special look at some of the scariest comic characters Marvel, DC and Vertigo have ever created. So, please stop inserting razor blades into that apple and come down to the lab and we’ll see what we see… 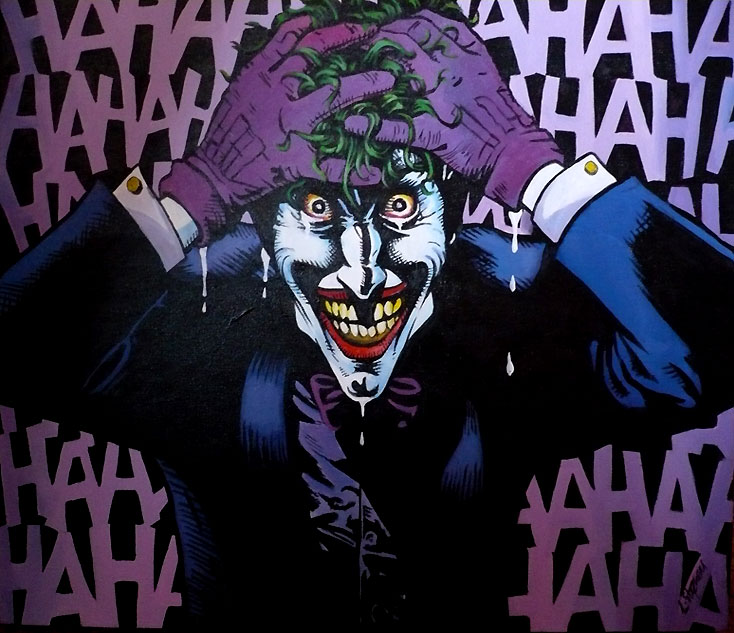 While certainly scary at times, the Joker is disqualified from this list due to his participation in the 1966 Batman TV series and subsequent portrayal by Cesar Romero (and his mustache).

Wait, you don’t think The Purple Man is scary? He’s a man who is purple, and isn’t that scary enough?

Well, no it probably isn’t, but what is scary about the Purple Man is his ability to control up to one hundred minds simultaneously with pheromones, and that he himself has the most twisted and perverted mind in the Marvel Universe. Zebediah Killgrave was a Soviet spy who was exposed to an experimental nerve gas which gave him yes, purple skin, but also the ability to convince anyone to do anything. Killgrave remained an underused Daredevil villain for many years until the late 1990s, where under the excellent writing of Brian Michael Bendis, the Purple Man did unspeakable things to the character of Jessica Jones (the Avenger known as Jewel) in the pages of “Alias”. 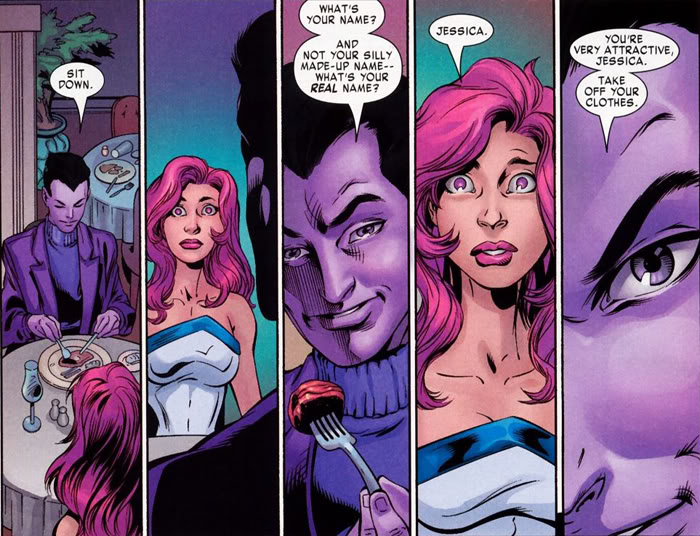 Seriously, the Purple man is one creepy dude. Raid your local comic shop’s back issue bins for the amazing “Alias” book (or buy it digitally or from our link on Amazon) and see what I mean. 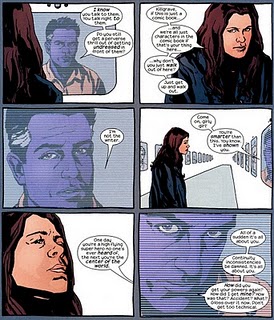 The Purple Man is a very evil dude who, trust me, belongs as our first entrant into the FIVE SPOOKS of DOOM. 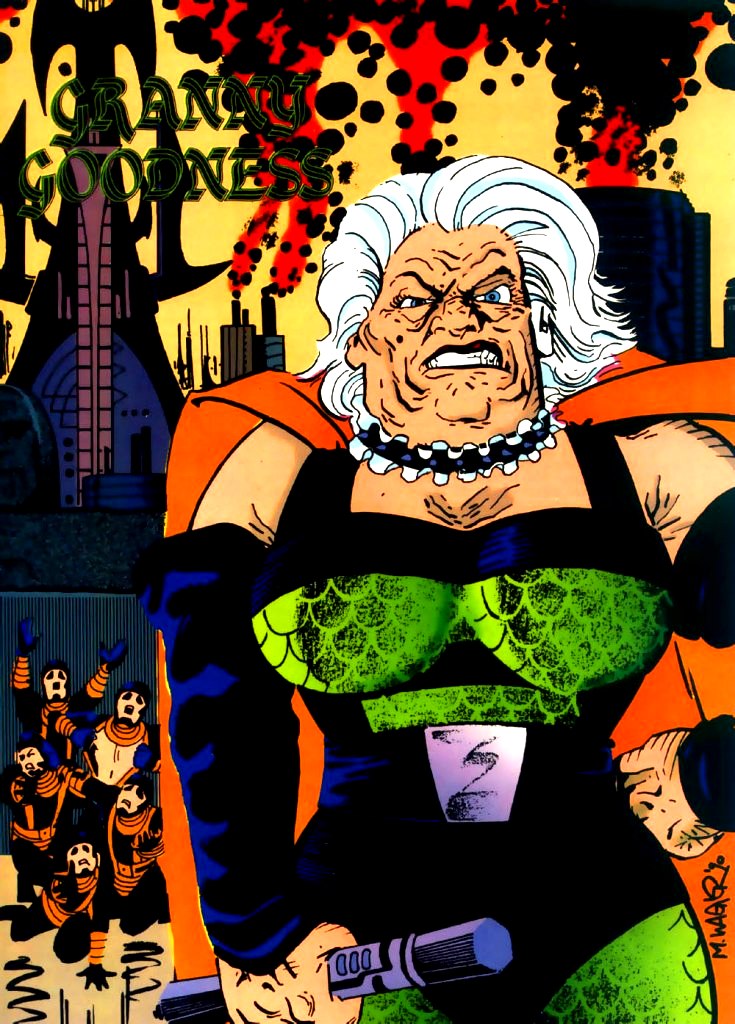 As the headmistress of Apokolips’ orphanage, Granny tormented and tortured many a child, including Scott Free (Mr. Miracle). Created by the great Jack Kirby, Granny Goodness remains a scary godmother if ever there was one. Cruel, merciless and vile, Granny made her way onto both the Superman: The Animated Series and Justice League Unlimited, both times being voiced by Ed Asner. Yep, the old man from “Up” voiced Granny Goodness. 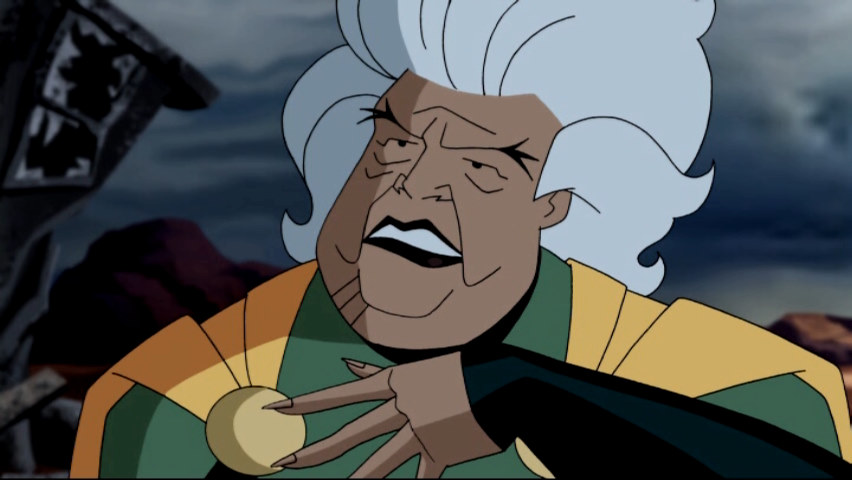 She was even written into a “Smallville” episode, where she ran the orphanage where Lena Luthor grew up. Read about Granny Goodness in DC’s “Fourth World” trade paperbacks. The FIVE SPOOKS of DOOM wouldn’t be the same without a terrifying grandmother figure. 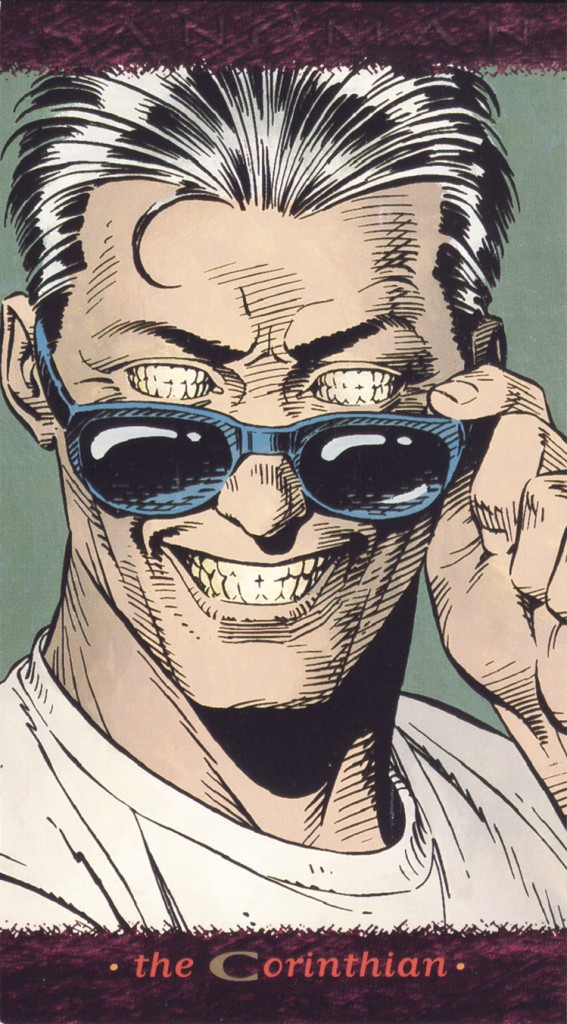 The Corinthian is the literally the stuff of nightmares. Created by Morpheus (the Sandman) to inhabit one’s darkest dreams, the Corinthian perhaps did his job too well. While the Sandman was imprisoned, the Corinthian and his eyes made of teeth escaped to the waking world, where he became a legendary serial killer whose calling card was to eat the eyes of his victims. 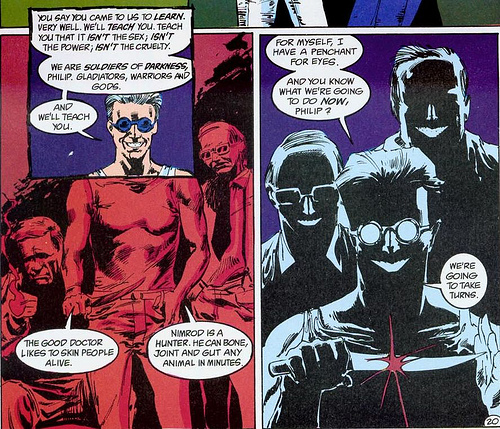 He inspired others to kill and eventually was captured and unmade by the Sandman, who resolved to create a better Corinthian next time. Neil Gaiman’s  Sandman epic is my favorite series of all time, and each of the trade paperbacks are at your library or can be found for very cheap on the Amazon marketplace. 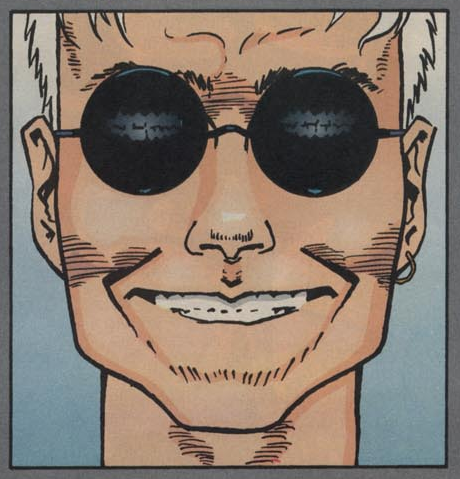 The Corinthian has visited my own nightmares since (though he was dressed as a Folsom High cheerleader named Stacey) and belongs smack-dab in the middle of the FIVE SPOOKS of DOOM. 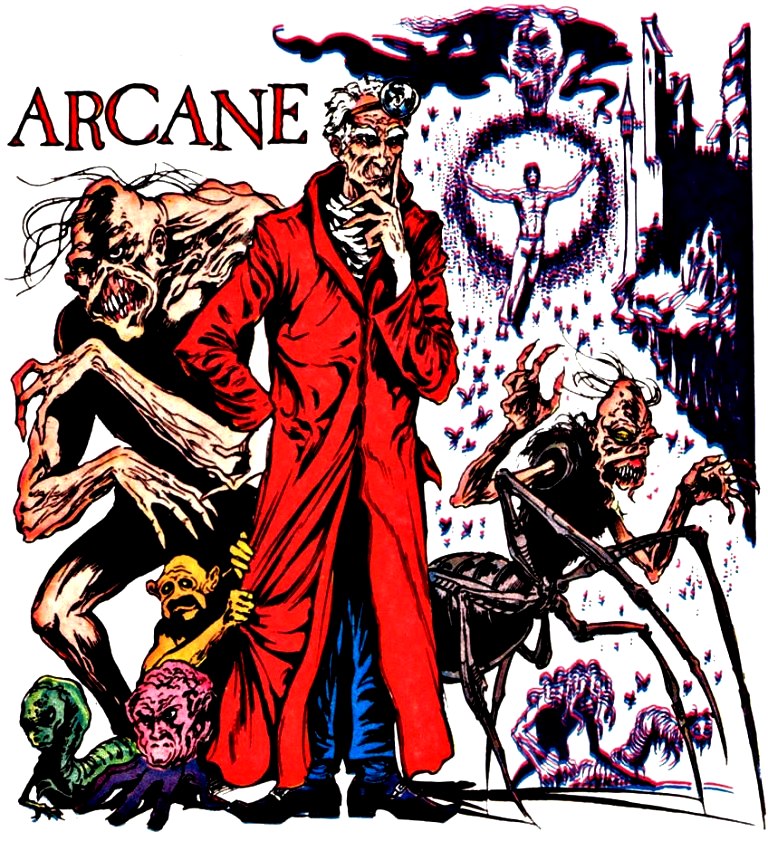 Doctor Anton Arcane was a former Nazi scientist who dabbled in both black magic and genetic engineering. Always a threat to Swamp Thing, Arcane really blossomed when Alan Moore began writing Saga of the Swamp Thing in 1982. Arcane, whose niece fell in love with Swamp Thing and did some weird inter-species stuff, was obsessed with immortality and attempted to manipulate Swamp Thing into swapping bodies with Arcane. Arcane survived being thrown out of a high-rise (think John Locke) and had his body grafted onto the hideous form of one of his “Un-Men” to allow him to further plot against Swamp Thing. 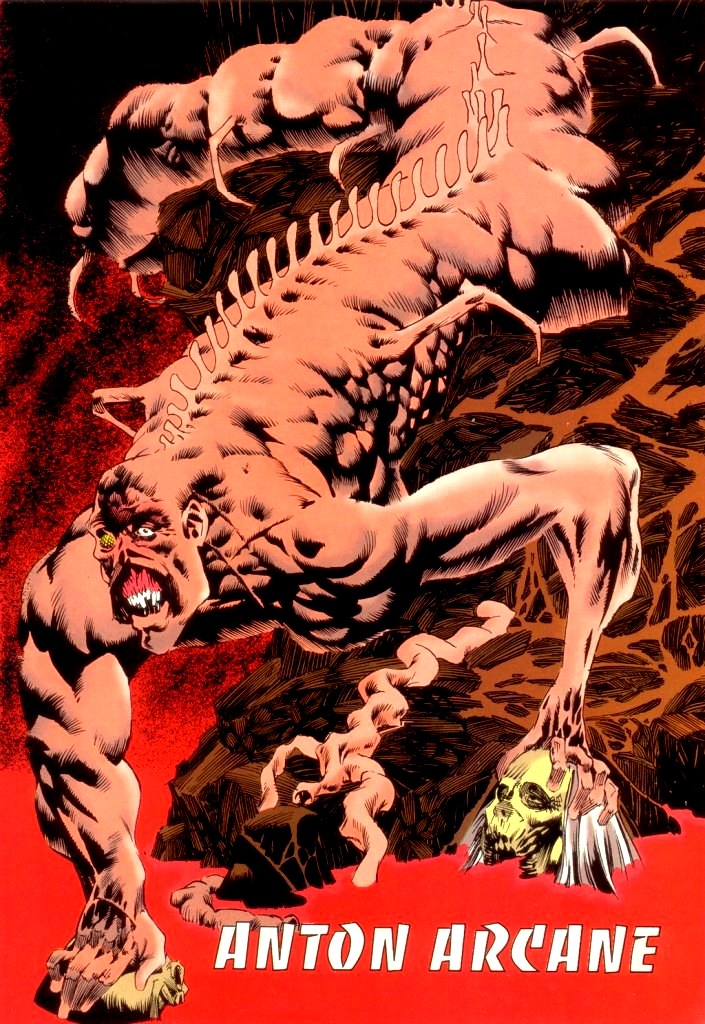 Arcane has died, gone to Hell, escaped from Hell, possessed his niece’s husband’s body and slept with her, died again, escaped again and will continue the cycle—he’s just that damned evil. Arcane is like the classic horror film villain who just won’t die. If you don’t have any of Alan Moore’s Swamp Thing comics, you’re really missing out (though you may want to take a shower after reading). Anton Arcane is as creepy as it gets, and belongs near the top of the FIVE SPOOKS of DOOM. 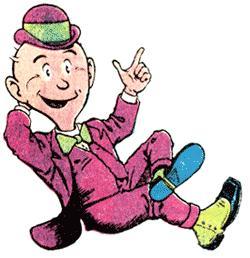 Wait, I know what you’re thinking. How on Earth is Mister Mxyzptlk in any way scary? He’s a 5th-dimensional imp who plays practical jokes on Superman. Well, in Alan (there’s that name again) Moore’s classic “Whatever Happened to the Man of Tomorrow”, Mxyzptlk is re-imagined as the mastermind of the ultimate plot to discredit and kill Superman, and then revealed as a demonic being of nearly infinite power. 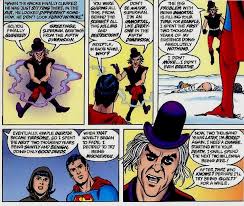 This is probably the scariest and least expected sequence I’ve ever read in a comic. I am very sorry if I spoiled a 27 year-old comic for you, but the book still holds up and is worth your purchase. 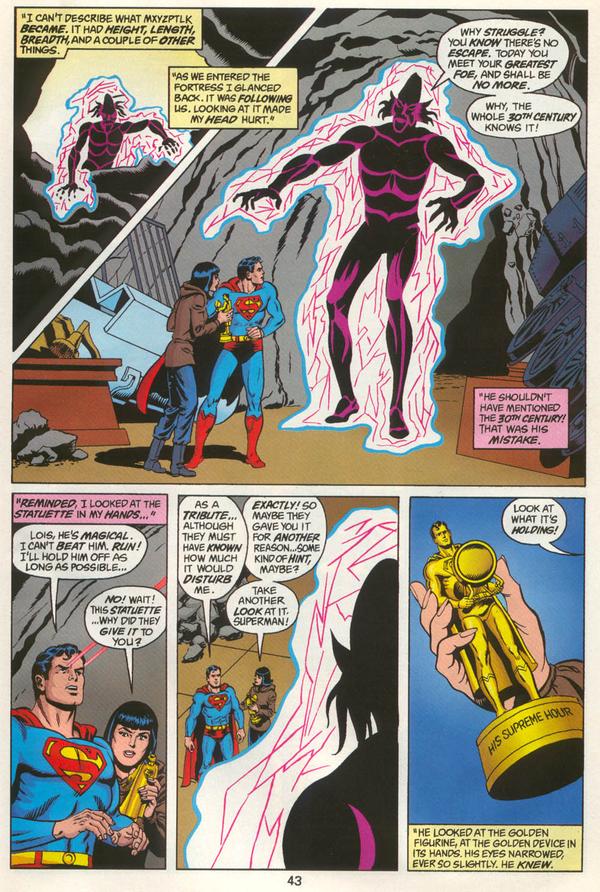 Get it, seriously. It remains the best Superman story ever and features Mister Mxyzptlk, our top entrant on the FIVE SPOOKS of DOOM.