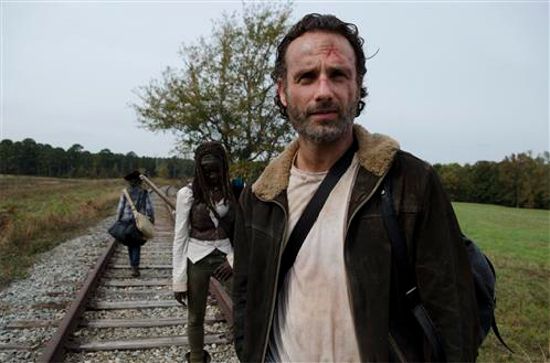 The world is a scary place. I don’t think that The Walking Dead needs to clarify that much more than they have over the past four seasons.  It is a scary, hellish place and whatever security and feelings of safety that we cling to can be ripped apart at any moment, as can we. That is why one must be prepared to do whatever it takes to survive, even if those actions are in direct opposition to what is morally right, or what you believe.

They couldn’t have made that any clearer with the two major scenes in Season Four’s bloody finale (is there any other kind on TWD?).The series as a whole has done a good job of presenting the viewer with various “solutions” to this fundamental problem of this scary, dangerous world, with this past season as a perfect capsule of it all. While the first half of the season showed how even in what can be considered pretty ideal situations, peace is always one crisis away from being broken.  One can fortify their position, turn the killing of Walkers adjacent to the fences into a job that reminds me of the necessity for garbage men, and turn towards an agrarian lifestyle; but we are always just one pandemic away from the stabilizing structures of society no longer being able to override that individual impulse look at everything outside of the individual self as a threat, and inevitably the “enemy.” Or even a hindrance that stands in the way of shelter, food, or whatever one needs or imagine they need for life.

Does that mean that one must abandon their principles when they lay down their spade and hoe (not racist and/or sexist, I promise) to defend themselves? Not necessarily, and Rick hasn’t shifted towards a completely utilitarian mode of thought quite yet, but it isn’t crazy to think he one day might.

Just watch the progression to see “how”, examining processes of a change a key to understanding “why” as well as the finished (and perpetually evolving) product. He started off as a sheriff deputy who by all accounts was just and good natured; character traits that still apply (though less and less as survival rips pieces of his former self away). Through time he has experienced betrayal and treachery of a close friend, various “others” who attempted to kill him and his people because they existed and posed a possible “threat,” and yet he still turned away from violence to teach his son and others that it was possible to live peacefully and in cooperation with fellow man.  He knows what is right and wrong, but after the death of Hershel at the hands of a vengeful thief and the destruction of the only sanctuary that he and his extended family had found since the beginning of their cursed life, his world view changes yet again to one that devalues life and treats EVERYONE unfamiliar possible (probable) murderers.

I can’t really blame him. When you have seen as much as he has, the words “better safe than sorry” can easily become a mantra and should.  I wholeheartedly believe that Rick wants peace and cooperation but knows that it isn’t possible in the here and now. You have to do whatever it takes to survive, but eventually it is possible use that ethos as a way to justify things that morally suspect. Rick is at that point where the lines that separate good and bad start to get murky and one can see when that mindset took root.

It wasn’t the biting of the jugular. That was just survival. Joe was going to kill Rick after defiling and killing his son and friend. Ripping his throat out was plain old creative thinking.

It wasn’t even taking his hostage in Terminus. That again was smart policing, noticing the poncho, watch, and riot gear that belonged to his mates and assuming the worst. 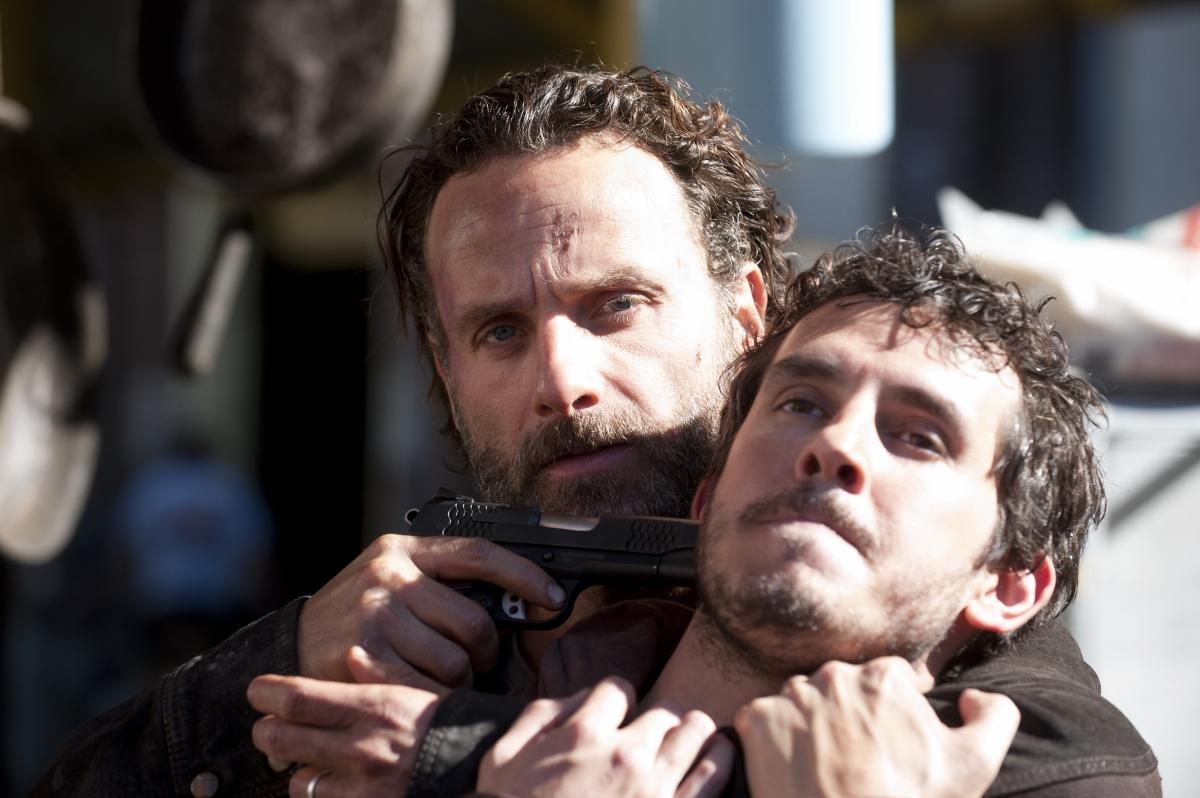 It was strangling Lou in the bathroom.

Killing another person at that point was preemptive and based on fear, even if it was very real fear based on experience. There was another way that would have shown restraint and still bought Rick the time he needed to flee the house full of possibly (probably) bad men, one that was literally shown moments before when two of Joe’s men had fought over a claimed bed, resulting in one of them unconscious on the floor. Had Rick just tempered himself enough to not kill a person who had not yet done anything to harm him, he would have at least been standing on more solid ground, morally speaking.

Let me be clear that I’m not minimizing Rick’s experiences that led to that moment. On the contrary, I offer all this as a comprehensible reason why Rick took the turn he did which one must admit was morally wrong, but also falling within that moral middle ground that Carol found herself in when she killed Karen and David –wrong but rationally sound. He may have been scared, and Joe’s men may have proved to be dangerous, but killing someone whose only crime was seeing you is criminal behavior by any standards even if it makes sense from a practical viewpoint, especially when digested through the strict code that Joe has decreed as law whether one consents or not.

That was the paradox. Joe was living by a code, a malleable one, but a code nonetheless. He believed that in order to prevent people (all people, but especially those like him) from “going all Darwin every few hours.” He was correct in that assessment because he was a smart man, but it was how he applied his code and what it allowed for that was the problem, not to mention the way the code could be bent and shaped to fit his whim while somehow remaining unwavering.

Codes are great, but absolutism doesn’t account for any relativity. Joe had his code, and despite how bad of a person he was, his code made sense….as long as it allowed for relative factors. That is why we have juries and trials and appeals processes: because there is mostly grey area when discussing morals and whether or not things are right or wrong. Contributing factors inform us about intent, which does matter. The problem is that its enforcement was done in such a totalitarian way. Joe was judge, jury, and executioner (not really though-his men were). There was no room for any contributing factors, any sort of reprieve from capital forms of punishment was at the sole discretion of Joe who only allowed for his interpretation of events and the law.

“These people shot our friend and if you say they are good people, than you are a liar.”This is from a killer and a group of killers. If this season has been a lesson in group dynamics and various “ruling” structures –or better put, “societal models”- this is fascism. This was authoritarian, which always seems to start making sense until the injustices that occur because of it come to light. However, what can one do then when those in power abuse it and refuse to relinquish? Nothing. Unless you are willing to rip out their throat with your teeth. 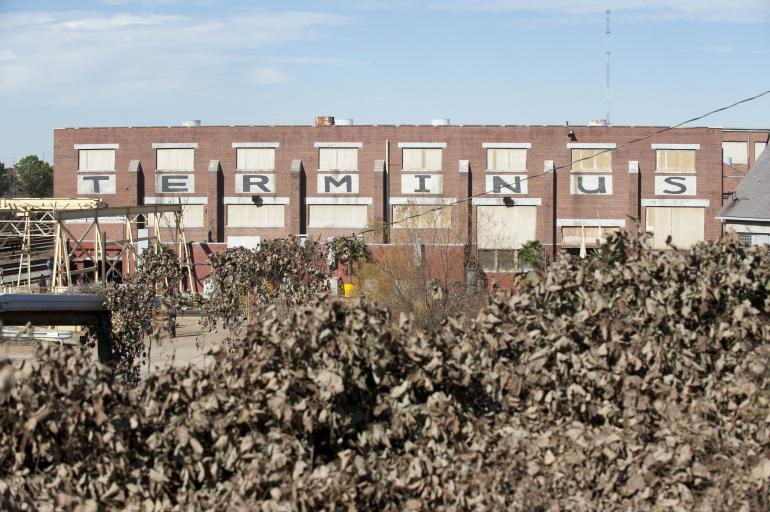 The End of the Line?

So where does this leave us going forward into Season 5? Obviously stuck in a train car marked with an “A,” but what does this mean? Are the people of Terminus big bad cannibals? A lot of signs point to “yes.” Their open door policy and effective ad campaign are like a giant spider web leading to that courtyard that showed evidence of a lot of flies caught in the past. I would have given them the benefit of the doubt and said “Rick is being paranoid,” but that doesn’t explain how Glenn and The Eugene Protection Agency who had walked in peacefully and trusting would have ended up stripped of their possessions and in a freight car. Something is afoot, but based on their reasoning (or at least what we know from the literal writing on the wall) it is possible that they are ethically just one or two steps ahead of Rick.

Where does Rick end up? I think it is possible that we see him go further down this path of “at any cost” before realizing that he has become no better than the people who pushed him into that paradigm, or the Walkers who will walk through fire and barbed wire to pursue their next meal, maiming themselves in the process. Rick is the central figure in this whole tale and I strongly believe that like those other guys over at AMC, he is going to sink a lot further down before realizing he has become something he loathes. And then there shall be redemption. I don’t know, I guess we will see. Either way, Terminus has no idea what they are about to be dealing with, and I for one can’t wait to see them find out.