As the UFC continues to barrel through its busiest summer schedule ever, UFc 163 takes us to Brazil. Originally supposed to be headlined by Jose Aldo defending the featherweight title against Anthony Pettis, a knee injury to Pettis saw him replaced by Chan Sung Jung, better known by his real name (*cough*), The Korean Zombie. Pettis now fights four weeks later for the lightweight title, replacing similarly injured TJ Grant. 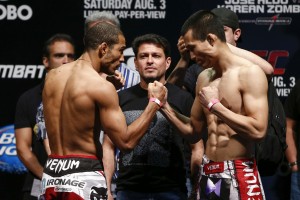 This main event is an interesting one. Jose Aldo is currently ranked as the fourth best pound-for-pound fighter in the UFC, with good reason, and he has done well in front of Brazilian cards before – but he has not really managed to translate that into good pay-per-view numbers as yet. While Aldo/Pettis was in with a shout for fight of the summer, this new main event doesn’t quite have the same appeal. No question, Jung is an exciting fighter, but he has had a near 18 month layoff since his last fight, and is unlikely to trouble such a skilled fighter as Aldo especially the longer the fight goes on. Aldo has struggled in the later rounds too though, and the tough weight cut to 145 leaves a question mark over how long he will stick around in this division.

The co-main event is an intriguing style match-up the likes of which we don’t see too often in the UFC these days, as unorthodox striker Lyoto Machida takes on decorated wrestler Phil Davis. Despite Dana White telling the media repeatedly that Machida’s win over Dan Henderson made him the number one contender at 205, instead his next fight is against Phil Davis, who is ranked seventh in the division. As Machida gets older and undoubtedly slows somewhat, Davis is the kind of opponent who could be very dangerous. Davis is, in contrast, just hitting the prime of his career and a win against a former champion and top ranked fighter like Machida could elevate him in the rankings. With other top ranked fighters like Henderson, Evans, Machida, Shogun and Little Nog looking unlikely to get title shots in a somewhat log jammed division, Davis could get himself into the mix for a title shot down the line.

The rest of the main card is not as star laden as you might expect but still has some intriguing fights, and none more so than Thales Laites .vs. Tom Watson. This is a classic submission style versus knockout artist match-up, with the added interest of Laites’ returning after four years away from the UFC. Laites fought Anderson Silva for the belt at UFC 97 in an infamous main event, and after dropping a controversial split decision to Alessio Sakara was cut by the UFC. He will definitely be out to prove a point here, but Watson is no pushover – a former BAMMA champion, Watson took KO of the night in his last outing. Four Brazilians contest the other two fights on the main card, with John Lineker looking to stake his claim for a flyweight title shot against Jose Tome (who is on a 16 fight win streak in lower level fights), and Blackzillian Cezar Ferreira looks to knock off UFC debutant Thiago Santos.

On the undercard, be sure to look out for Sergio Moraes .vs. Neil Magny. Magny was one of the shining lights from TUF 16 and has probably the longest arms of any human being ever, but Moraes is a tough opponent. Don’t forget the Brazil factor, as Brazilian fighters always seem to do well at home. I’d back Magny here though, and look for him to do well in the welterweight division going forward. Also on that undercard is Ian McCall, who will also be looking for another crack at Demetrious Johnson and the flyweight title as he takes on Illiarde Santos. Vinny Magalhaes and Anthony Perosh will also look to get back on track after losses in their last fights, and Brazilian Amanda Nunes will debut for the promotion against Sheila Gaff.