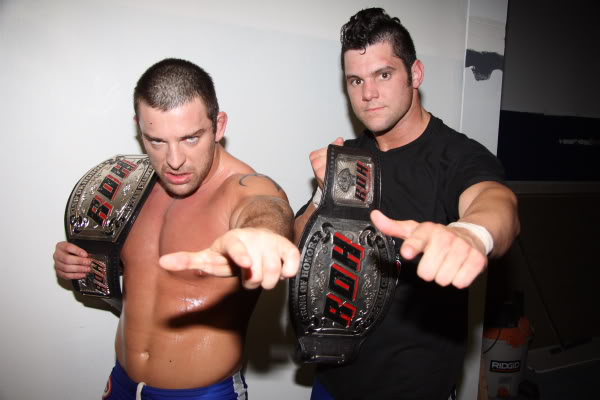 Welcome to the High Spot, Place to Be Nation’s weekly pro wrestling update. Steve Wille (@SteveWille34) will take you through the biggest story of the week in the world of wrestling, adding in a unique view to help put the story in perspective. GLENN BUTLER! @glenniebun then takes a quick look at other important stories of the week. If you have any tips or story ideas, please contact us at info@placetobenation.com!

In the past couple months, Davey Richards and Eddie Edwards, the American Wolves, have resembled free agents from the days of the Monday Night War. As noted in the first edition of the High Spot, Richards and Edwards performed on NXT in hopes of garnering a WWE contract. Richards was unceremoniously dropped from Ring of Honor after some dubious comments in the media, and he cryptically acknowledged going to Orlando at his last show for Pro Wrestling Guerrilla. Some assumed that this meant the Wolves would be reporting to WWE developmental, but, evidently, Richards fooled us all, as they debuted for TNA Wrestling yesterday evening, in storyline, as the first members signed by a new investor in TNA.

Davey Richards has his critics due to his style and gruff demeanor, but there’s no doubt he’s a credible talent. I personally witnessed him have an amazing live match with his protégé Kyle O’Reilly at a Ring of Honor event in Milwaukee this year, and his presence on the Evolve show last week played a role in propelling me to order my first DGUSA/Evolve show in two years’ time. Eddie Edwards, though perhaps the less known of the Wolves, likely has a greater upside. He’s a personal favorite of mine, and he continues to improve both in and out of the ring every year. Both have in If the Wolves remain a team, they’re easily at the top of the heap of TNA, along with Bad Influence. Separately, they help build the decaying number of potential X-Division competitors.

While all of the attention focuses on the loss of big names like AJ Styles, Hulk Hogan and what is likely a sabbatical by Jeff Hardy, several lower-tiered wrestlers have recently departed TNA for various reasons. Former Aces & Eights members and Kenny King are out of the picture, and over the last few weeks Manik (TJ Perkins) has been missing from the active roster. The depth of the roster is lacking, and shows on the post-Bound for Glory Impacts, where the format has heavily leaned towards skits over in-ring matches. There’s no shortage of young talent on the independent scene, several of which have experience in TNA. Trent Baretta and Jigsaw performed on the Destination X episodes of Impact last summer and impressed many. With a reduced schedule, TNA can afford to tryout outside talent for a week of tapings without signing them to long-term deals. Signing Edwards and Richards starts to fill in some of these holes, and Dixie Carter has insinuated that more moves are to come. There’s a clear move to reduce costs, and continuing to bring in new, younger talent helps with this, as well as decreasing the notion that TNA attempts to make money on the back of ex-WWE talents. My sincere hope is that the signing of the Wolves can shift the tide towards exciting, high-quality athletic matches, which is what always made TNA stand apart in years past.