Greetings, buckaroos. Today we finish up with our retrospect on the evolution of the look of Mr. Jason Voorhees. 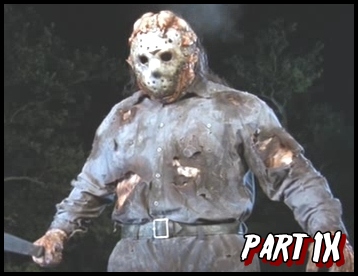 Jason Goes To Hell. Not since A New Beginning would a film divide Friday The 13th fans between the sides of love it & hate it. Ironically for this article, one of the big reasons some fans hated JGTH is because Jason, in his true form, is barely seen. For those who aren’t big fans of the series, JGTH attempts to build a mythology for Jason. The story here is that Jason has been blown to pieces by the FBI, and now he needs a new body. So, the majority of the film is Jason’s soul, essence, whatever,  jumping from body to body trying to get ahold of a female Voorhees. Until then, the body’s just keep falling apart. When he finally gets himself a female Voorhees, we get Jason back in the form we know him best.

It’s a shame that Jason’s traditional look isn’t seen much in this film, because they did a fantastic job. He’s been wearing the mask so long that his skin is growing over it. Along with that, his head is misshaped & diseased, giving Jason one of his more menacing looks. My only problem is that they have him with his shirt tucked into his pants. I’m sorry, but am I the only one who has a problem with the thought of Jason seeing to it his shirt is tucked into his pants? Unless he works at Costco or something.

Obviously, since the mask is now apart of him, we never see Jason without. 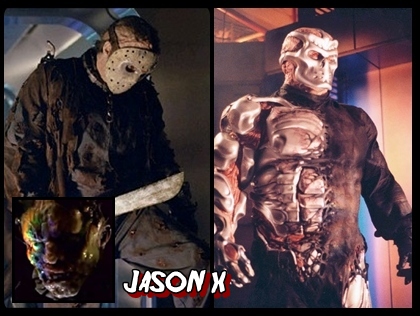 Jason X. While Freddy vs Jason was stuck in development, going through 12 different scripts and such, they wanted to keep the Jason name out there. So, to make sure they didn’t screw anything up for Freddy vs Jason, they set this film in the future. Jason is cryo-frozen as a way to imprison him, and found in the future by a space class on a field trip. They bring him aboard, and soon enough he realizes it’s been almost half a century filled with free-wheelin’ boobies, drugs & drank, partying teens, and absolutely NO disembowelment. So he promptly makes the come back.

Jason’s look here is a bit generic, with a few other touches. You can see his right eye clearly, which is a bit obnoxious since his right eye has always been the one that was screwed up. He’s got a little peach-fuzz going on, along with his traditional attire, and a restraint collar from the beginning of the film when he was held captive by the Army.

However, near the end of the film Jason gets one of his greatest and most inventive looks ever, as he’s rebuilt via nano-robots after being blown apart by an android. The result is Uber-Jason. He’s covered in steel-muscles, with a slick, futuristic mask & upgraded machete. It’s not just the look that’s upgraded either, I read that in the script they wanted to have the crew create a hologram of Jason’s mother, in order to stall him, however he would have torn right through her, in order to show just how unstoppable and pissed-off this new version truly was. It’s a shame we didn’t get to see him go up against a bigger group or something massive, similar to Ripley in the worker-machine, because I’d like to see just what he was capable of. Again, a great look that once again showcased the inventiveness & originality you expect from the Friday series.

Jason’s mask only comes off for a second, and it’s probably best. Jason’s facial appearance is almost comical, as he has one bulging eye and a face that looks like oatmeal. The make-up team really dropped the ball on this one, giving us a look almost as goofy as Part 8. 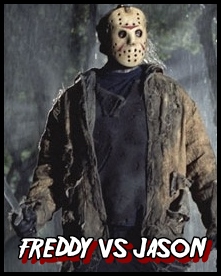 Freddy vs Jason. After 15 years, just as many scripts & directors, ans of Friday The 13th finally got themselves Freddy vs Jason. Thankfully true fans of the series wrote the script and we got an excellent film. Again, for those not in the know, there was a bit of controversy that came with the picture. Until Part 8, Jason had been played by a different guy in each film. It wasn’t until Kane Hodder came along in part 7 that we got the man who would be most identified with the character of Jason, as he went on to play him in 4 films. He was always pushing for FvJ, so it was only natural he’d play Jason in the film. However, the studio wanted a taller guy to play Jason and decided to go with someone new. That’s it. They wiped away the man who’d been playing the character for 13 years because they wanted height. The man they got, Ken Kirzinger, wasn’t bad, but his Jason was vacant. No emotion. A boring husk who had little to no character. Fans wanted Kane’s Jason, the one who portrays Jason as a seething force of nature that puts 110% into every motion. Who acts with a purpose, and not something on a random path. Alright, enough with my gripe.

Jason’s look is pretty decent here. They really wanted to show the eyes, which I think is a mistake. When Jason is human, the eyes work. When he’s undead, it works best that the eyes of the mask are simply black. Here, it almost makes Jason look like a doof. As he almost appears cock-eyed. Beyond that, I dig the outfit, and like how thick Jason appears. With his skin now a dark grey, and his machete beat-up, jagged & rusty, he does appear like someone who’s been rotting in the woods for years.

As for behind the mask, we’re never given a look. All we see are his teeth, and they look about as you’d expect.

Friday The 13th [2009]. After FvJ, people thought it was best to reboot the series. I had no problem with that, as I felt there wasn’t much they could change really, and with the writers of FvJ behind it, I had faith they’d deliver a solid product. This film basically takes the best of the first 4 films and puts it all into one, which is a great idea. We get a running, menacing, truly fucking scary Jason again, who’s dulling out fantastic kills one after another. Definitely a favorite of the series for me.

His look is sort of mountain-manish, which makes sense, as that’s pretty much what he is. He’s given a jacket, with a ratty t-shirt & pants. On his side is the sheath for his machete, which I thought was a nice touch. In the beginning of the film they go back to the sack, which was great, and helped to give Jason a bit more menace, as he wasn’t as iconic in it as the hockey mask. When it does come into play, it fits perfectly. They updated the design, making it darker than the previous films, while having it stick out further so the eyes of the mask are deep & dark. Jason looks phenomenal, very much helping the reboot in being as great as it is.

We never see underneath the mask really, but there have been photos released that show us what he looks like, and it’s one of the roughest visions.

Well, that wraps it up for this week. The next episode will air on October 30th, Devil’s Night. So, I’ve decided to go with something truly frightening. True horror. An entire recap of the feud between Scott Steiner & Triple H. You think you know what terror is?

Any questions or comments, send’em over to caliberw@placetobenation.com. I’d definitely dig getting a mail-bag portion for the article going.