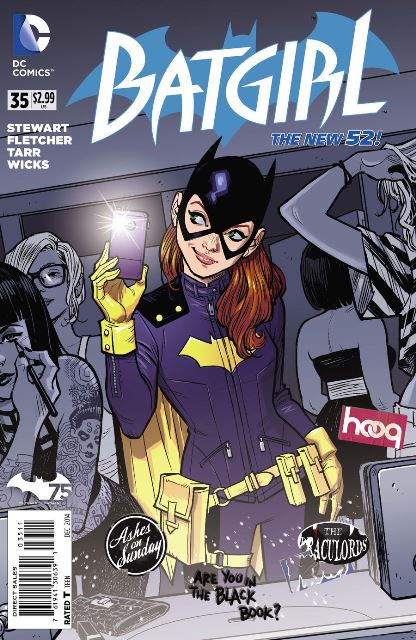 Creative team change-ups often come with some baggage. In the case of Batgirl #35, which sees new writers Brenden Fletcher and Cameron Stewart with artist Babs Tarr taking over for Gail Simone and Fernando Pasarin, it’s way more than just a little carry-on. But, does it work?

That’s a complicated question. The change in tone is a drastic one. Batgirl/Barbara Gordon has left the life she knew in Gotham’s harder, more crime-ridden neighborhoods full of costumed freaks and psychos for Burnside, the “college town” part of Gotham City across the river. The setting is brighter, the characters are more tech savvy (see also: talk like a lot of modern college kids and are a bit too open with what they share online) and the overall look and attitude of the title has gone from dark and foreboding to a lighter, more mystery-driven narrative. That’s a lot to change up about a title all at once. But let’s unpack that a little.

First up is the art by Babs Tarr. She’s certainly talented in her style of art, which resembles the Archie Comics “house style” in some ways but has much more kinetic energy to it than those titles. Most importantly though, she knows how to direct your eye and pull you into the story with both traditional and some lightly experimental layouts. Her splash pages showing how Barbara’s eidetic memory works are some of the best in the issue and give you real insight into how both Barbara and Babs see detective work. Those pages might be some of the most fun and detailed Batgirl has had since the New 52 began.

Then we have Fletcher and Stewart’s story. The pair spends most of their time focused on establishing that this is not the same direction as the previous creative team or the same part of Gotham from before. Yes, there are some “hipster” characters but there are far more average, young college students. But does that make it a “bad story?” Not at all. In fact, it’s quite entertaining when judged on its own merits. Barbara is written as the smartest-21-year-old-in-the-room who also happens to be dealing with a lot of the troubles someone in her situation might. Drinking a bit too heavily and dealing with the consequences are not exactly unheard of for a college student in graduate school nor is it totally alien to Barbara in the New 52. She had a similar response when she thought she killed her brother, though that was potentially more destructive than what happens in this issue. It was nice to see her former roommate calling this out as unusual behavior for Barbara, who seemed to agree. Hopefully that sticks with her as an experience to learn from and there’s every indication that it will.

The meta commentary about privacy and how its changed in the modern context was a smart bit of storytelling. Barbara using the hacker villain Riot Black’s own methods against him was a nice touch, too. It becomes clear fairly early on that everything Barbara does that seems “out of character” is a two-fold plan to both blend in and adapt her detective skills to the current situation. The level of success she has with this is impressive, though not perfect and that’s to be expected since it was a first try. But Batgirl is nothing if not adaptable.

Not everything about the issue was a hit, though. Some of the dialog choices seemed clunky and like it was trying too hard to incorporate social media aspects in places where it wasn’t needed. Still, it wasn’t so much that it took away from the actual story or kept things from moving forward quickly. Some of the new characters felt unnecessary and hopefully won’t appear again. In particular, the guy Barbara makes out with drunkenly at a party her first night at her new place. Luckily, that story point gets handled fairly quickly and the guy having a seeming resemblance to Dick Grayson probably wasn’t totally coincidental, either. Black Canary showing up to tie this closer to Birds of Prey felt like it was trying too hard to incorporate aspects of the New 52 that don’t necessarily fit with this story. Fortunately, that doesn’t feel like it’s a major part of the plot either, so it likely won’t be around for too many issues.

This issue is not going to be for everyone. It shouldn’t be expected to be. Hopefully those who only have a passing knowledge of Batgirl, but were turned off by the dark nature of the previous run will give this a chance. It’s definitely aimed at a younger generation of readers than usual, but that doesn’t mean older fans can’t enjoy this, too. The best idea is to read it as its own story, maybe even thinking of it as separate from the New 52 altogether, but that’s no guarantee, of course. Personally, I’ll be back for issue #36 to see where this goes. Most new teams and new titles, like new TV shows, can take an issue or two to really get going. By my estimation this one was ahead of that curve. If the follow up is at least this entertaining, I may be in for the long haul. Hopefully this team gets the chance to continue telling their story, their way.