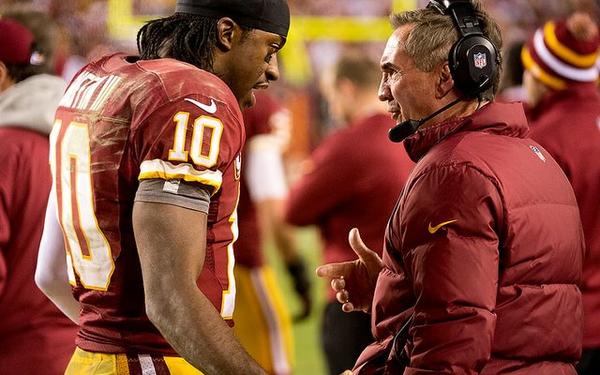 There’s perhaps not been a draft prospect at QB as hyped as Andrew Luck, hyped to the point that it was popular opinion NFL teams were purposely throwing games to gain the number one overall pick in 2013.  Luck was the prototype for an NFL quarterback, 6’4″, nearly 240 pounds, a very respectable 4.6 40 yard dash for a pocket, or pro style quarterback that is most certainly throw first and scrambles out of necessity.  Despite setting NFL records and making the pro bowl, it’s probably true that of his class, Luck went from a messiah in the NFL draft to just a ‘good’ quarterback in the court of public opinion.  On paper, what Andrew Luck did had really never been done before, but on television, talk radio and message boards across the internet, it was the flashier, more explosive quarterbacks like Robert Griffin III, Russell Wilson and Colin Kaepernick who pushed the needle and drew the true media buzz.

Let’s be clear, all three had tremendous rookie seasons alongside Luck.  Robert Griffin III was a Heisman winner, a natural in the press room and a Madden video game player come to life.  He could burn a cornerback or a safety (if you were a linebacker, just forget it) but Griffin also had the cannon to dial in a 60 yarder right in the numbers.  The Vick comparisons were expected, but while Vick had arm strength similar to Griffin, there has probably never been a time in Vick’s career where he was as accurate throwing the ball and save for RGIII’s unfortunate injury, perhaps Vick wasn’t even the runner Griffin was by the time the 2012 season ended.  Russell Wilson (third round pick by the Seahawks) is the anti-Luck in every sense.  At 5’11” and barely 200 pounds, Wilson is everything NFL scouts aren’t looking for.  Wilson readjusted nicely after transferring to Wisconsin in college and put up numbers that forced NFL teams to at least entertain the idea of giving Russell a shot to prove himself at the next level, but even the best college quarterbacks under six feet struggle to implant themselves as starters for more than a couple of years.  Colin Kaepernick was drafted a year ahead of RGIII and Russell Wilson, but earned his first shot at being a starting NFL quarterback in 2012, after sitting behind Alex Smith, who despite a great 2011 season, was usually the butt of jokes in the Bay Area.  Kaepernick is the poster boy for the offensive revolution that took the NFL by storm in 2012.  The read option, a contemporary offense run by many successful college programs is perhaps the father to Kaepernick’s “pistol offense”, which he commanded at Nevada, mostly because it was created by former Nevada coach Chris Ault.  The read option in many ways was the next progression of offense in the NFL, focused on the dual ability of super athlete quarterbacks to be equally as dangerous throwing the ball as running it, with perhaps more measure and precision than the typical scrambling NFL quarterback in years past.  The read offense, especially the pistol formation, took the NFL by storm after the 2012 rookie class ran roughshod over NFL defenses all year and Kaepernick took a read option offense to the Superbowl.

The offseason was filled of reports of teams incorporating read option and pistol formations into their playbooks.  The Kansas City Chiefs even hired Nevada’s Chris Ault, widely recognized as the creator of the pistol formation.  Chip Kelly brought many of the elements of the read option to Philadelphia, a natural fit with players like Michael Vick and DeSean Jackson who can slice and dice a defense a million ways after the snap.  In that sense, it was the new wildcat formation.  If you recall after the Dolphins 2008 season, virtually every team in the NFL at least tinkered with the idea of running wildcat plays, but like the read option in 2013, it seemed that after sending coordinators’ heads spinning throughout the 2008 season, come 2009 and beyond the NFL had adapted to tinkering with the backfield and very few offenses even have wildcat formations in the playbook.
Read option offenses, spread options, pistol formations, all allow for an offense to compensate for a discrepancy in talent over a defense, which is much more prevalent in college than the NFL.  In college, Nevada regularly ran up against teams that recruited and played at a much higher level than the Wolfpack.  In the NFL, even the worst teams still field what are likely the best 1% of football players on the planet.  It should come as no surprise then, that offenses anchored by option quarterbacks are struggling early in 2013.  Only Russell Wilson ranks in the top 10 in total QBR in 2013, with Kaepernick coming in 19th and RGIII a dreadful 30th.  Cam Newton and Michael Vick are at 12th and 13th respectively all backing up the idea that while NFL offenses spent all of the offseason incorporating option and pistol plays into the playbook, defensive coordinators spent just as much time working to counter the threat of mobile quarterbacks.

What does this mean?  Well, for starters, it’s likely come 2014, option plays take up as much of the playbook as wildcat formations.  That is, they’re in the arsenal for unique situations, not the backbone of a pro offense.  There’s enough talent between guys like RGIII and Colin Kaepernick to readjust and find their way back into the playoffs this season.  The Redskins and 49ers may have to dial down spread option formations in their offense and depend on their signal callers to play more traditional roles on offense.  For someone like RGIII, this might be beneficial coming off of a severe injury last year.  Griffin is a criminally underrated pocket passer, a testament to how athletic and exciting he is when he turns on the jets.  For Kaepernick, there might be a slightly more uphill battle.  Much of Kaepernick’s success in college came off of Mountain West defenses not having the athletes on defense to cover a quarterback who could burn a secondary with his wheels, and when those defenses were forced to waste a safety or linebacker spying on Kaepernick, he’s got enough of an arm to slice through a secondary.  Colin’s got size, but he may not have the speed (4.53 40 yard dash at the NFL combine) or arm to truly be dominant as a runner or passer individually.  He is most deadly when a defense has to go all in on isolating on his feet or his arm, opening one up for the other.  If Kaepernick is asked to be a run first quarterback he could live up to being a late second round pick.

It will be interesting to see how read option and pistol quarterbacks fare throughout the season.  It could be as simple as dual threat quarterbacks just being stuck in a rut, but the athleticism on defense in the NFL gives more credence to linebackers and linemen having adjusted to the basic idea of the read option.  Perhaps it’s the aftermath of a horrific injury that’s holding RGIII back from his 2012 form.  But, as of September, it looks like the Colts were right in hedging their bets on a traditional pro style quarterback.  Forecasts for the 2014 draft are heavy on dual threat quarterbacks like Louisville’s Teddy Bridgewater, UCLA’s Brett Hundley and Oregon’s Marcus Mariota, all of which have dominated on the gridiron this fall.  But, as the NFL season moves forward, perhaps Clemson’s Tajh Boyd moves up towards the number one pick in Clemson’s more traditional pro-style offense?  Just as fast as option quarterbacks took the NFL by storm, they could become an afterthought in May.