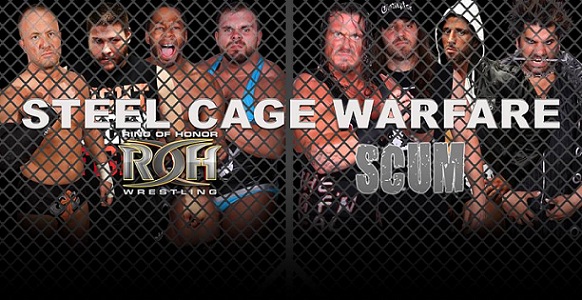 Tonight’s main event has been marketed as the most important television match in ROH’s history.  Should S.C.U.M. win Steve Corino will become match maker and run the company into the ground, but should team ROH prove victorious then S.C.U.M. will be forced to disband.  Before that however, we have the opening contest…

Both of these are teams I’d describe as indy-riffic.  For one team that isn’t meant as an insult, the other team has a guy named Zizou Middoux whose partner wasn’t satisfied with one shitty tattoo and therefore got a whole fucking constellation of them across his back.  Richards and Middoux in to start with some sloppy chain wrestling (and that ain’t Davey’s fault–there’s lots of things you can call him but “sloppy” isn’t one of them).  Richards eventually puts an end to the not-so-technical masterpiece with an enzugiri which puts Middoux on the floor.  Richards tries for his running kick on the apron but comes up empty.  Middoux jumps up on the apron and gets a shitty enzugiri of his own to put Richards on the floor; Edwards charges but gets dumped over the top rope by Zizou.  Mike “I wish I was teaming with my brother instead” Sydal moonsaults of the top to the floor taking out both wolves.  Davey is thrown back in the ring and double armdragged by Sydal and Middoux, who are apparently called #partyboys…did I mention this team sucks?  So #indyjobbers then do these completely unnecessary cartwheels just to double dropkick Richards for two.  Sydal then cradles for another 2-count.  Richards creates some space and tags in Edwards; the two of them double team Sydal and beat the tar out of him in their corner.  Edwards whips Sydal into a neutral corner, but gets caught with a boot and a tornado DDT on his approach.  Double tag and Middoux is a house of fire  mildly heated offense.  Richards reverses a whip into the corner but Middoux leapfrogs over his clothesline.  Middoux’s twisting enzugiri is dodged and Davey tries the one man alarm clock.  Zizou catches his kick and then connects with the twisting enzugiri he wanted earlier.  Edwards and Sydal both run in to the ring and start brawling.  The Wolves go for stereo clotheslines which are dodged.  #botchfactor go for stereo neck breakers–but of course they are completely out of sync. Middoux whips Sydal into Richards then hits him with a (shockingly) sloppy codebreaker.  Sydal drops Richards with a double knee drop off the top rope.  The pin attempt is broken up by Eddie at 2.  Edwards chucks Middoux and starts trading forearms with Sydal.  #badtattoos gets the advantage but Edwards catches a kick and pulls forcing him into the splits.  Edwards chops Sydal in the back of the neck while Richards kicks him in the face, effectively ending his contributions to the match.  Middoux comes charging back in and manages to fuck up TAKING an alarm clock from the wolves.  Can this guy do ANYTHING right!!!!!  It only gets two.  Edwards goes up and hits a double stomp, and then Richards does the same for the three-count.  3/4* Nothing to see here except a challenger to Rip Impact for the very prestigious stupidest ring name title.  Post-match, #Partyboys reject the code of honor and the Wolves, rather than look offended, just laugh at them.  They’re certainly laughable.

After a commercial break we get a pretty good recap package on everything S.C.U.M. has been involved in since the 11th anniversary show.

Rules are as follows: two men will start the match, after five minutes another will enter.  After that a new competitor will enter the match every two minutes.  A team loses when all of its members have been eliminated by either pinfall or submission. S.C.U.M. won a coin flip backstage which gives them the man advantage. Jimmy Jacobs is starting for S.C.U.M. and BJ Whitmer is starting for ROH.  They brawl all over the ring until Jacobs manages a head-scissor take down which sends BJ face first into the cage.  Jacobs ties BJ up in the ropes and dropkicks his face into the steel.  Jacobs starts with the choking and Corino exclaims that he isn’t responsible if Whitmer is chocked to death he isn’t responsible.  Jacobs eventually relents and starts teasing a spear.  BJ dodges and Jimmy launches himself straight into the cage.  Whitmer then takes the Zombie princes on a tour, bouncing him off each of the cage’s four walls.  He gets a 2-count for it.  Jacobs starts fighting back with a series of jabs only to be caught in an exploder suplex for two.  They start exchanging chops in the center of the ring until Jacobs pokes Whitmer in the eye to take the advantage.  Jimmy looks for a DDT, but BJ reverses it into a vertical suplex–which he rolls into a northern lights suplex that is bridged for a two-count.  BJ starts grating Jacobs’ face on the cage when Bobby Cruise starts the countdown for the next entrant. Rhett Titus has entered the match.