For the 25th WrestleMania, WWE decided to hold a big battle royal featuring Divas from past and present. To help move along the entrances, they brought in Kid Rock to perform a concert while they all headed to the ring. The performance was a medley made up of Kid’s top songs and as he transitioned to So Hott, a song about an obsession with women, the Divas started to appear. It all made for a fun scene with Kid getting down on the stage while surrounded by a bevy of talented women. 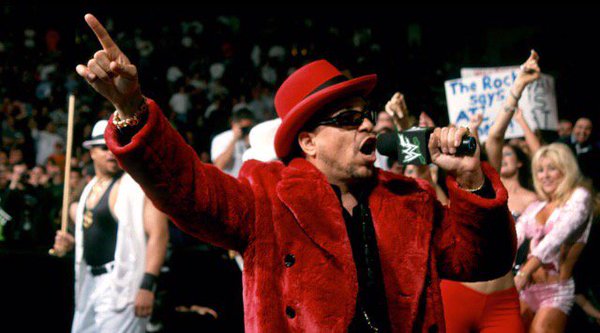 As the WWF continued to blow up in the mainstream in early 2000, the company released an album of hip hop songs entitled WWF Aggression. One of the songs on the album was a tribute to the Godfather by the legendary Ice-T. So, at WrestleMania in Anaheim, T was on the scene to rap out Godfather, D-Lo Brown and a cavalcade of Hos to kick off the show. The one message we all learned? Pimpin’ Ain’t Easy. 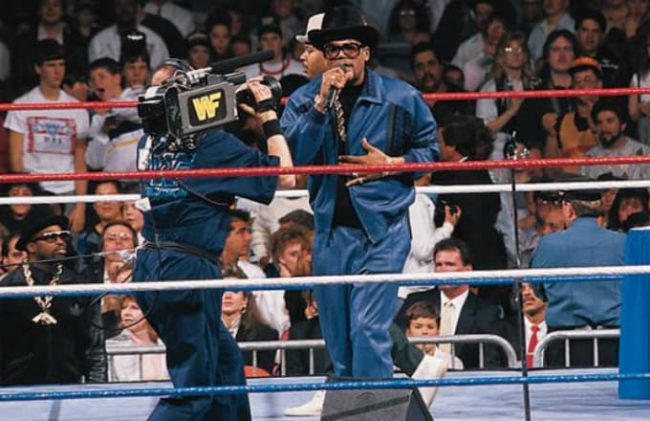 Predating Ice-T by 11 years was the very first rap performance in WrestleMania history. At WrestleMania V inside Trump Plaza, the iconic Run-D.M.C. brought their turntable into the ring and spit out a special WrestleMania themed rap. While the show was bloated with matches and celebrity segments, it showed that the company still had some cache by importing one of the most well known rap groups in the world to perform on its biggest stage. 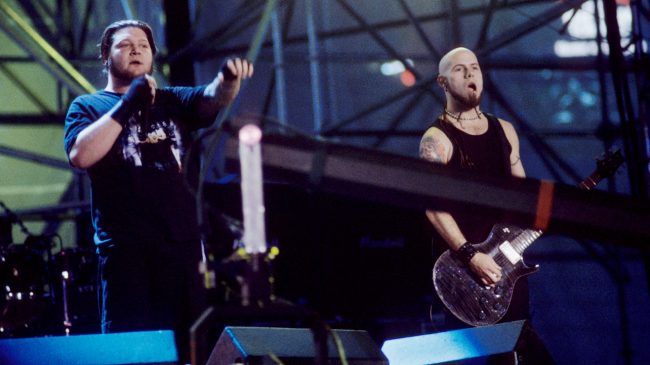 While hip hop was the genre of choice for an album in 2000, two years later, WWE embraced the suddenly hot nu metal phenomenon and brought in Drowning Pool for the biggest show of the year. The band would be given the honor of a double performance, first playing over a video package promoting the main event with a performance of their song Tear Away and then were brought back out later to play Triple H to the ring with their version of The Game. It was about as perfect of a match as you could get given the year and the band. 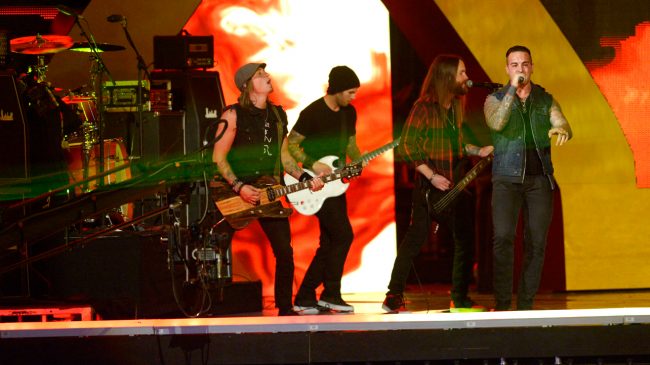 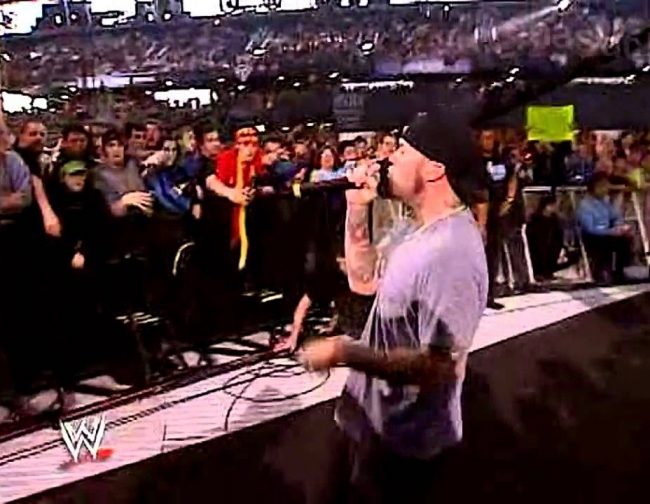 Well, you knew this list wouldn’t be complete without an appearance by WWE’s favorite band! Two years after Limp Bizkit’s My Way dominated WrestleMania X7, the band was back at it in Seattle, but this time they were live in the building. First they would perform the official theme song of the show, Crack Addict, but then they also gave a great live performance of Rollin’ to play the American flag toting Undertaker down to the ring. 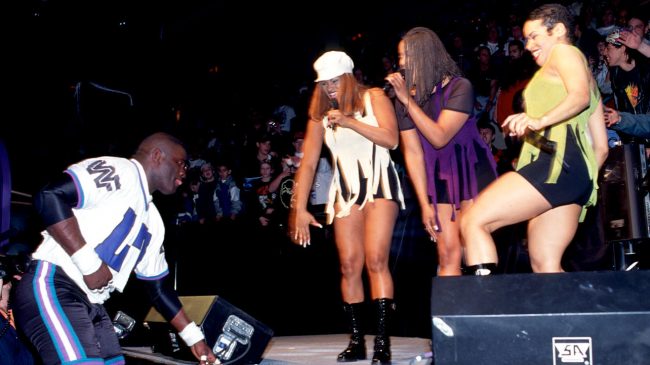 With the WrestleMania XI card lacking in the area of compelling storylines and strong in ring action, the WWF decided to load up the show with as many celebrities as they could find. With Lawrence Taylor set to main event the show, the company brought in the famous rap group Salt-N-Pepa to play LT to the ring. The ladies grinding and serenading LT with a customized version of Whatta Man added a lot to the pomp and circumstance of Taylor’s tilt with Bam Bam Bigelow. 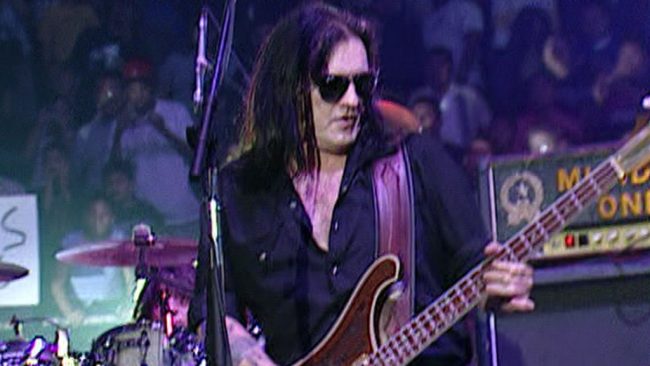 Veterans of WWE and WrestleMania, Lemmy and the boys have delivered multiple memorable live WrestleMania performances, but their first was arguably the most iconic. Triple H was coming off the biggest year of his career and was set for a big time battle with the Undertaker and having Motorhead show and play him to the ring live continued to build his legitimacy as a high level star. 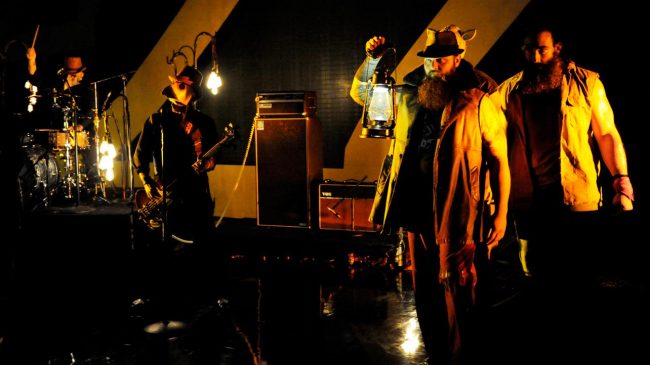 Bray Wyatt’s entrance is one of the most creative and visually impressive entrances in wrestling history. Now add in a live performance of his chilling theme song, Live in Fear, by a band decked out in creepy masks plus the overall voodoo theme to fit in with the New Orleans setting and you have an all time GOAT contender. Wyatt was set for the biggest match of his career and a star making entrance like this was even more proof that he had arrived. 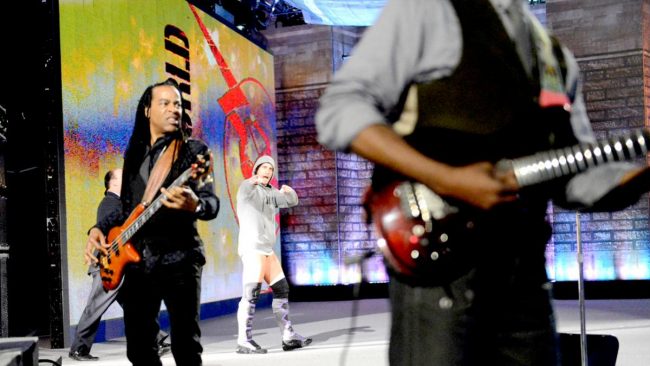 Despite all of the starts and stops and big time title matches, CM Punk’s defining WWE moment, non Pipe Bomb division, may have come at WrestleMania 29 when he was tasked with delivering a strong performance with the quickly aging Undertaker. With a shaky storyline in their rearview mirror, all that was left to do was get in the ring and shock the world. And that all started with the legendary Living Colour giving a surprise live performance of Punk’s iconic theme, Cult of Personality, as he defiantly marched to the ring inside MetLife Stadium.