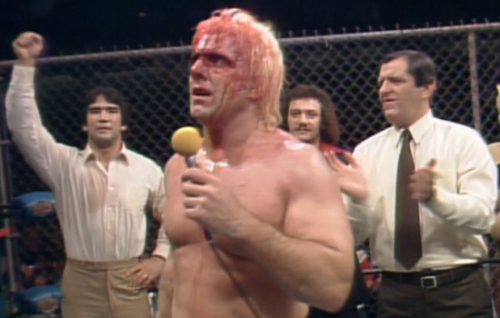 As 1983 ended, the United States wrestling scene was changing. Vince McMahon was starting to raid stars from other territories as he brought in Roddy Piper and Hulk Hogan, just to name a few of the stars he signed for his company after long-time Champion Bob Backlund became stale on top of the card. Bill Watts and Jerry Jarrett were sharing talents and the AWA was struggling with a dated product and old stars on the top of the card. The NWA was also struggling, especially in Florida and Georgia, but the Mid-Atlantic Territory (Jim Crockett Promotions) was running strong and at the top was the Nature Boy Ric Flair.

While starting the year as the NWA World Heavyweight Champion, Flair faced the Midnight Rider (Dusty Rhodes under a mask) on February 9th in Miami, FL. This show also drew a record crowd and live gate in Miami. The match, refereed by NWA President Bob Geigel, saw the Midnight Rider pin Flair. However, the NWA rules stated that a masked wrestler was unable to hold the title and when Rider refused to unmask, the decision was overturned and Flair remained champion.

After that match, Flair spent February traveling all over the country defending the title against some of the biggest stars in wrestling history. He went on to have a 60 minute-draw with Bruiser Brody in front of 18,000 fans in St. Louis and even faced Andre the Giant in a match that ended in a double count-out before going on to defeat Terry Funk in Toronto. Flair would work multiple hour long matches all across the country as well as Japan and Canada. Flair’s work spanned all over the globe as the NWA Champion. House show attendance numbers would be bigger than normal when Flair was on the card.

On June 10th, Flair faced off against Harley Race in St. Louis in a best-of three falls match. Race won the title that night and he became the seven time NWA World Heavyweight Champion, breaking the record previously held by Lou Thesz. A few weeks later on July 2nd, Flair received the first of several rematches that packed arenas all over the Carolinas that week. According to Dave Meltzer of the Wrestling Observer Newsletter, Flair vs.Race matches that week tripled the average house show numbers.

After that, Flair teamed with Ricky Steamboat for a series of matches against Jack & Jerry Brisco for the NWA Tag Team Championship, then shortly after that teamed with Dusty Rhodes against Tully Blanchard and Wahoo McDaniel. Flair did not really do a whole lot of note until Thanksgiving night.

Starrcade 1983 was held in Thanksgiving night in Greensboro, NC and the main event featured Flair challenging Harley Race for the same NWA World Heavyweight Title that he lost just a little over five months prior. North Carolina was essentially known as “Flair Country” as it was where he not only learned how to wrestle but also were he became a star and the crowd was 100% behind their man here. That night the crowd was so loud that both men have claimed in interviews that they could hear them all the way in the dressing room before they came to the ring. The two fought in a cage match that lasted 23:49 that saw Flair get the win with a flying body press. This incredible match also won the 1983 Wrestling Observer Newsletter “Match of the Year” award. After the bout, several babyface wrestlers came out of the locker room to celebrate with Flair, who then thanked all of the fans for their support. This moment was the passing of the torch to Flair, who would now become the top wrestler in the NWA.

Flair worked all over the world in 1983 with a grueling schedule to boot. Whether it was a 60 minute match against a Bruiser Brody or putting over younger talent like David Von Erich, Flair was the premiere wrestler of 1983 and the one constant star you could count on to deliver. 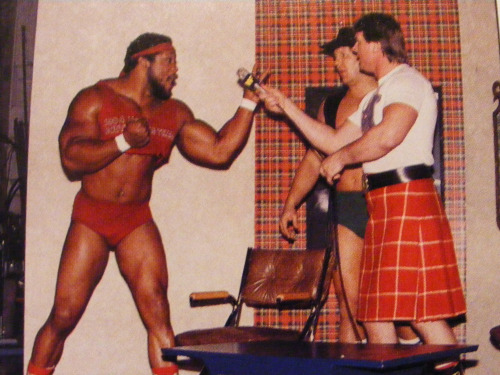 In 1984, the wrestling world was changing. Vince McMahon was trying to takeover the wrestling world in North America by bringing in not only other star wrestlers but also stars from the world of entertainment. And at the forefront of that movement was Roddy Piper.

Signed at the end of 1983, fresh off of a violent feud with Greg Valentine in the Mid-Atlantic Region, Piper was actually hurt and did not wrestle the first few months of his WWF career but rather accompanied other wrestlers such as “Dr. D” David Schultz and Paul Orndorff to the ring. However, Piper’s value in the WWF was not in the ring anyway, but rather on the microphone.

On the 1/28/84 edition of Championship Wrestling, Piper was the guest on Victory Corner, which was a talk-show segment that corresponded with Victory Magazine hosted by editor Robert Debord. It was then that it was announced the segment was ending and replaced with Piper’s Pit, hosted by Roddy Piper. Once Piper’s Pit was born, the world of television wrestling was changed forever.

A show hosted by a heel was rare and Piper would insult the babyface wrestlers while gloat over his fellow heel wrestlers. He shocked audiences when he brutally attacked longtime TV jobber Frankie Williams on the set and when he destroyed Jimmy Snuka by smashing a coconut over his head, it was one of the most memorable moments in WWF history. However, the biggest moments of Piper’s Pit in 1984 had to do with the WWF’s burgeoning Rock ‘n’ Wrestling Connection.

As a frequent guest, Capt. Lou Albano came on the 4/28/84 edition of Piper’s Pit to proclaim that he was responsible for the musical success of Cyndi Lauper and was in fact her real manager. This led to several weeks of TV that culminated with Lauper herself appearing on the show to say that Albano was not her manager and that led to the 7/23/84 “Brawl to End it All” special that aired on MTV with Piper selecting the Fabulous Moolah as his protege to defend her title against Wendi Richter that ended with Richter winning but more importantly, it made Piper a household name in America.

Besides Piper’s Pit, he did have feuds in the ring with Snuka and the Tonga Kid, billed as the cousin of Snuka, that electrified crowds across the country. He also teamed with Orndorff and later his “bodyguard” Cowboy Bob Orton. Piper then ended the year at the 12/28/84 Madison Square Garden Show by smashing a platinum record over the head of Capt. Lou Albano, which planted the seed for the WrestleMania I main event.

In 1984, there was no heel more hated by fans than Piper. He revolutionized how a heel worker acted on television and his style has spawned many imitators over the past 30 years and without him, WrestleMania I would not have been the same and probably would not have had the same success. 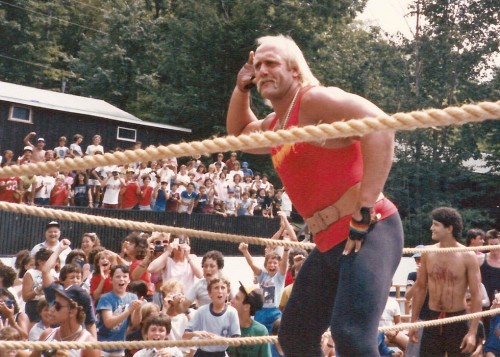 1985 will always stand out as a pivotal year in the history of professional wrestling for one reason above all others: the birth of WrestleMania. At the time just a super show, this event has come to represent the pinnacle of the business; the rest of the sports entertainment calendar – not just within WWE, but globally – revolves around the Showcase of the Immortals. Without Vince McMahon (and his wife, Linda) gambling their entire fortune, it would not have happened; without the celebrity star power of Mr. T, Cyndi Lauper, et al., it would not have been a spectacle; but without Hulk Hogan, it would not have been a success.

Our argument for 1985 really came down to two options: Hulk Hogan or Roddy Piper. With the year being far more crucial to WWF than the NWA or anywhere else, it had to be one of the Federations two standard-bearers getting the nod here. While Piper arguably talked fans into the arenas because they wanted to see him get his ass kicked and carried hot programs, Hogan had the star power that made something like WrestleMania possible. With “The Hulkster” holding the WWF title proudly, Vince McMahon had a pop culture-friendly face who could venture beyond the confines of syndicated programming onto MTV and Saturday Night Live, bringing in the casual audience he had long coveted.

Outside of the ring, Hogan proved instrumental in pulling off that first WrestleMania if for no other reason than he had the relationship with Mr. T that held that blockbuster main event together. When T balked several times up to the day of the show, Hulk kept him in line; when Piper and Paul Orndorff wanted to take liberties with their contentious celebrity sparring partner, the 300-plus pounder across the ring kept a modicum of order.

Post-WrestleMania, Hogan helped inaugurate Saturday Night’s Main Event and played a major role in the first three airings. He represented the WWF on tours with New Japan Pro Wrestling and headlined live events against the likes of Orndorff, ron Sheik, Brutus Beefcake and others. As the World Wrestling Federation transcended the territorial model in 1985, Hulk Hogan stood front and center, becoming the biggest star in the history of the business.

But really, it all comes down to WrestleMania; without that show, perhaps the WWF and Vince McMahon don’t survive, and without Hulk Hogan, who knows where we’d be.