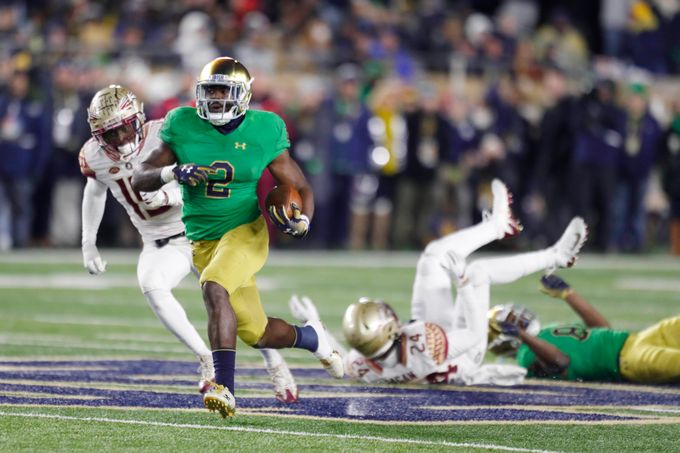 Talk about chalk. A somewhat dull week in college football, as all the top teams won handily. Some of them will win handily this week but one could have a tough test in the Bronx. Let’s look at some SCORCHING hot takes.

ND wins easily: With Ian Book nursing sore ribs, Brandon Wimbush got his job back for one night. On Senior night in Notre Dame’s last home game Wimbush threw three TD’s in a 42-13 win over Florida State. Wimbush still threw a couple picks and at times was erratic. Book is back this week for a very tough neutral site test against #13 Syracuse at Yankee Stadium. Who would have thought ND’s toughest game to end the season WOULDN’T be against USC?

Is Dabo in Saban territory?: Speaking of trap games, Clemson could have been walking into one Saturday up in Chestnut Hill. Didn’t happen. Trevor Lawrence threw a touchdown pass and ran for a score and No. 2 Clemson knocked Boston College quarterback Anthony Brown out of the game early on the way to routing the #17 Eagles 27-7. Clemson wins the ACC Atlantic and poises for another ACC Title and another Playoff spot. Is Dabo Swinney in that rarefied air yet? Maybe another National Title can help that cause. There’s still a way to go, but it’s looking good right now.

Speaking of ACC teams: Moe Neal rushed for a career-best 159 yards and two touchdowns, senior quarterback Eric Dungey ran for two more scores and passed for another, and #13 Syracuse took advantage of five Louisville miscues to rout the Cardinals 54-23 on Friday night. After getting blown out four straight years by Louisville, the Orange’s win pretty much cost Bobby Petrino his job. Fine by me, that scumbag never should have gotten another top flight job anyway. ‘Cuse has a chance to wreck ND’s season Saturday in the Bronx.

Mid-Season scrimmages: This isn’t about a specific game, but it’s about games coming up this weekend. I’ve never been a fan of the SEC as a conference. I think they’re an arrogant bunch who think they rule college football and can control everything. Now they feel they have the right to schedule cupcakes the week before their big rivalry game. Alabama and Georgia are committing the biggest crimes of all. Alabama, who plays the Iron Bowl next week..takes on…THE CITADEL??? They’re 52 point favorites! What a joke. And Georgia? 41 point favorites to MASSA-FUCKING-CHUSETTS. Seriously? Other teams are playing tough opponents this week (ND, Ohio State, etc). But Nick Saban & Kirby Smart feel the need to “prepare” for their rivalry games by scheduling…THE CITADEL? September perhaps, but the MIDDLE OF NOVEMBER? That’s bullshit, and the NCAA needs to step in and do something about this.

Academies Update: Ken Niamatalolo is going through his worst season as head coach of Navy. The Middies have lost seven straight after a 35-24 loss to Central Florida, falling to 2-8. Army on the other hand has won six straight after a 31-13 win over Lafayette. They’re 8-2. Air Force is 4-6 after a 42-24 win over New Mexico. This week Army is home to Colgate, Navy is home to Tulsa, and Air Force is at Wyoming.

Alabama Dominates Despite Controversy: Alabama is by the best team in the country with the best player in the country. This makes them incredibly hard to beat, if not impossible to beat. While they were able dominate Mississippi State as they have everyone else this season, this game had its fair share of controversy. The first of two controversial plays that happened in the first half came when Alabama appeared to fumble the ball with a clear recovery from Mississippi State, only for refs to not review the play after the Alabama player was ruled down before said fumble occurred. The second came on should be touchdown where a so called block in the back occurred. This very well might’ve been on of the worst penalty calls I’ve ever seen, and I say that as a college football fan not an MSU fan. With all that said Bama likely would’ve still come away with the victory but it would’ve made for a very different game if both of those plays go the other way.

Northwestern Wins Big 10 West: At the beginning of the year no one had anybody other than Wisconsin winning the Big 10 West. They were the overwhelming favorite, with nobody that anyone thought could challenge them. Enter Northwestern. This team, with losses to Duke and Akron in non conference, has managed their way through a tough Big 10 schedule only losing to
Michigan in conference so far. With this past week’s victory over Iowa they were able to lock up their spot in the Big Ten Championship game, where they will either have rematch with
Michigan or a matchup against Ohio State.

UCF Rolls Ahead of GameDay Visit: UCF as a football team is a team that is out to prove to the rest of the country that they belong amongst the conversation with nation’s best. They have dominated pretty much any and all competition they’ve come across through the last two seasons. This was no different for this past week’s game against Navy, winning 35-24. This week though they not only welcome in their toughest test of the season in the Cincinnati Bearcats, but they also welcome in the bright lights of hosting College GameDay and a prime
time kickoff. This will be UCF’s biggest stage to prove where they belong amongst college football’s best.

Tennessee On the Verge of Bowl Eligibility: Entering this season, not much was expected from the Tennessee Volunteers and first year head coach Jeremy Pruitt. While many expected Pruitt to turn the Vols around with time and a few years with the team, no one expected them to be as competitive as they are or to be 5-5 at this point. This was no more evident than this past week’s domination of Kentucky. While Kentucky may have been experiencing an emotional hangover after the loss to Georgia, the way Tennessee dominated this game was nothing short of
impressive. The Vols now sit one game within becoming bowl eligible, with Missouri and Vanderbilt left on the schedule. A bowl game would be a huge accomplishment for this team and for Coach Pruitt.

Georgia Overpowers Auburn: With the Eastern Division title already in their back pocket, it was easy to expect Georgia may come out slow in this rivalry game against Auburn. This was evident when they fell behind early 10-6. After that though, revenge from last years regular season loss to the Tigers set in. They would go on to score 3 touchdown on offense and shut out Auburn the rest of the way pulling away with a 27-10 victory. UMass and Georgia Tech are all that separate Georgia from their meeting with Alabama, and while Georgia should roll in
those two games they don’t need to look too much ahead.

Except for the SEC in essence taking the week off, we do have some games of note this week.