Brett Brooks may not be a name you know now, but it soon will be. He’s the creator of the hit original graphic novel, Dust Bunny and the upcoming OGN Deuces Wild, but he started his artistic career in the humble land of Ozark, Alabama. Now residing in Atlanta and working full-time as a freelance artist, Brett has managed to fund his solo projects through successful Kickstarter campaigns and word-of-mouth as well as taking Dust Bunny on a comic convention tour of the South.

As he gets ready to unleash his newest project on the world, Brett sat down with Russell Sellers of our PTBN Comics Staff to chat about how far he’s come and to give some details about Deuces Wild.

Russell Sellers: Alright Brett, thanks for taking the time to talk with Place To Be Nation. This being your first time, tell me a little bit about how you got into drawing and how that lead you to writing/drawing your own OGN, Dust Bunny.

Brett Brooks:I think I started out similar to most artists – drawing and creating as a kid. When I was younger, we didn’t have computers (or even video games until later in my childhood) so being expressive through other channels was just the default hand we were dealt, really.

I drew all through my childhood, but I named my first characters around the age of 8-years old. They were the result of – what would late be called – an understanding of intellectual property. That is, I knew that the characters I was reading about in the Sunday papers and comic books would never be mine to create with. So I decided to create my own characters – Bomby and Dee. They were a bomb and a stick of dynamite; a Tom-and-Jerry-style duo that chased each other around, trying to ignite the other’s fuse.

I think that’s when it all clicked for me; the idea of being a content creator. Even though, at that age, I could have never anticipated a career…I think it was that window of time that altered the trajectory of my life.

Russell Sellers: That’s awesome that it hit for you that early. What was the inspiration for Dust Bunny and how would you pitch the story to someone who might be interested to check it out?

Brett Brooks: Dust Bunny was the result of me revisiting a college assignment about 2 years after I graduated, really. I created the character solely for the purposes of a comic book scripting project at the Savannah College of Art and Design in 2006. The nature of the assignment was to simply “mock-up” a short, 5-page script so that we could get a basic idea of pitching to a publisher. Art was optional, actually. So I created Dust Bunny and Mighty Mite (which was Mite’s original name), turned it in, and forgot about it until 2011. I was walking through the park one day, got fired up to write a graphic novel…and then went home and began on it.

Dust Bunny is a crime-noir, black and white story that follows Dust and his partner, Mite, as they sweep the streets to uncover who is issuing burn notices throughout Basement City.

Russell Sellers: Nice! Out of curiosity, how did you do on the assignment? Now that Dust Bunny has been out for a while and gone through a couple of printings, how has the reaction been from fans who’ve read it? I understand that you aren’t really a fan of the traditional superhero comics, so what comics would you say influenced you?

Brett Brooks: I got an “A”, I believe. I actually don’t remember!

The fans have been nothing short of amazing. From the initial Kickstarter supporters all the way up to the convention goers that have purchased the book during its 2014 tour – everyone has had all-around positive feedback and encouraging responses. Couldn’t be happier!

Comic strips and Saturday morning cartoons influenced me more than anything. Garfield, Ghostbusters, The Far Side, Family Circus, TMNT, Danger Mouse…the list goes on. Funny enough, I don’t actually remember reading comic books at all. And that’s definitely carried into my adulthood, because the only comic book I currently own is the Complete Collection of Calvin and Hobbes.

Russell Sellers: Some of that definitely comes through in your writing, too. Creating your own graphic novel from scratch and without a publisher to back you must have been pretty tough. What motivated you to get started and what advice would you give to budding creators out there?

Brett Brooks: I’ve been dedicated to the craft the better part of my life. So while the motivation to do a graphic novel was very whimsical and arguably ephemeral, there was a long life of dedication that reinforced the choice to do it, I think.

If I’ve learned anything, even in the past few years, it’s that advice is very rarely a general application. Each person has to absorb and process what works best for them, and it all comes down to that person’s choice on whether they decide to – here comes the general advice – not quit. Quitting, though, can come in many forms – job security, a new baby, etc. Now, quitting for these things is in no way negative or something to be looked down on. But I think each person can discover what “not quitting” within their own circumstances means. Some people can commit hours in a day to their creation, while others only get the evening after the kids are in bed. Whatever that means for you, act on it. I think if you do that enough, and eventually you’ll reach that goal.

Russell Sellers: That seems like sound advice for any artist or writer. Is there a particular scene in Dust Bunny you’d say you’re most proud of or one that you really love going back to again and again?

Brett Brooks: The spider scene. That was one of my favorite segments to develop, and I feel like it’s got a very particular vibe to it when compared to the rest of the story! 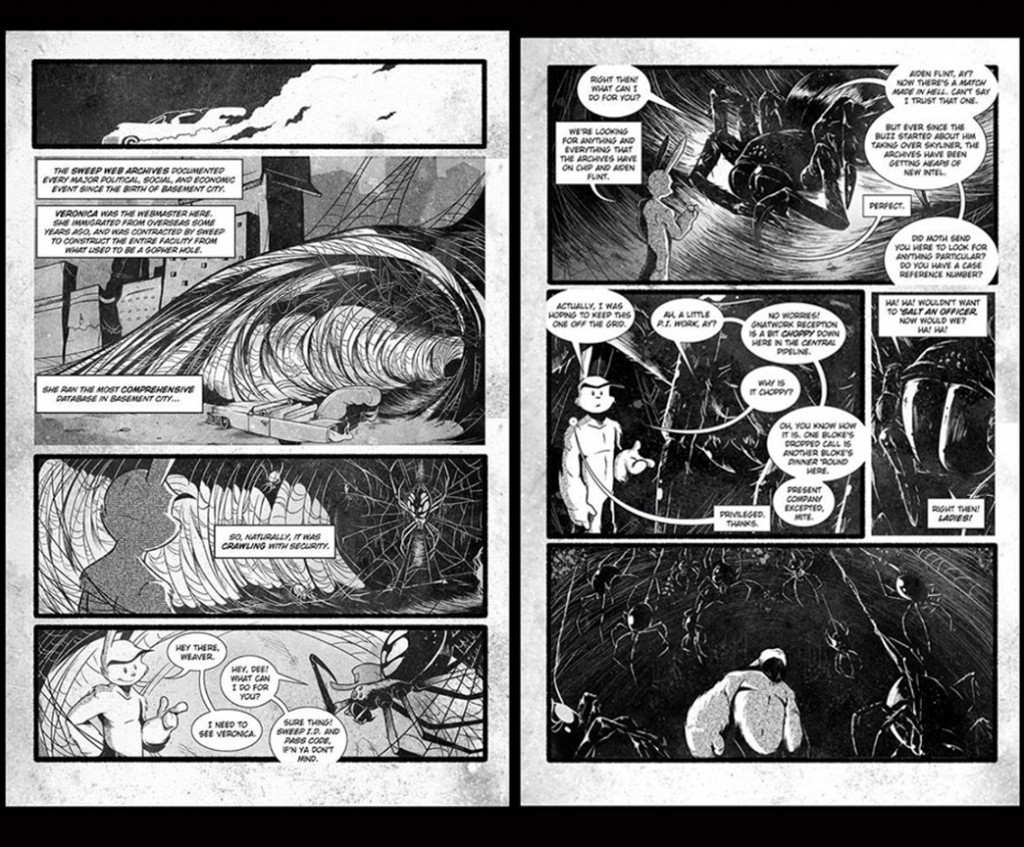 Russell Sellers: Let’s talk about your new project for a minute. What’s it called and what can you tell us about it?

Brett Brooks: Well, the new project is a full-color action/sci-fi graphic novel titled “Deuces Wild”. I can tell you that it’s a completely disconnected feel than my previous GN and will be exploring all new characters, a bigger story, and fresh themes! The Kickstarter campaign as well as a Facebook page and a new website that dives further into everything regarding the new book is live now!

Russell Sellers: That sounds like it could be fun! Can you tell us anything about the premise or characters we might be seeing?

Brett Brooks: Sure! The story will follow 4 bounty hunters as they track down Deuces, a former member of the Deck – a government power structured by the hierarchy of playing cards – who has gone rogue and turned on his own House.

Russell Sellers: And it looks like you’re using all animal based characters for this one, similar to how Dust Bunny was structured. Is there a reason for that? Will this take place in space or a distant world or both?

Brett Brooks: Not all animals. The characters are going to bounce around in design, actually. Animals, humanoid, alien…I’m really trying to push my character work with this book. So you’ll be seeing a nice variety with Deuces.

Yes, both! Deuces Wild will be taking place primarily on a distant planet, with a little space travel peppered in. It’s still being developed, so everything is up for grabs!

Russell Sellers: It sounds like it has a lot of different influences, but which ones are the most prominent to you? Is there a little Star Wars or Firefly influence on this one at all?

Brett Brooks: Well, I’m not a huge Star Wars fan, actually. And I have yet to see Firefly (Yes, I know. Please, keep the spears sheathed until the end of the interview). To be quite honest, science fiction isn’t my go-to. I’m much more drawn to drama and personal stories. I haven’t really considered where the influences have come from. I think I just wanted to do something a little more involved and complicated. And a space epic satisfied it!

Russell Sellers: I think that’s actually kind of cool that you’re going into the genre fresh and going for your own take on it rather than using presupposed story forms. When can we expect to see Deuces Wild in print? Will it be available digitally, too?

Brett Brooks: Well, Deuces is providing some new challenges for me as a writer/illustrator – one of the primary ones being that this book will be in color. Since I’ve never embarked on something this visually involved, I would be inept to give you a set date for when it’ll be available. The best I can do is…some time in 2015 (hopefully). It will be available digitally, yes.

Russell Sellers: Very cool. Is there anything you’d like to add before we end?

Brett Brooks: I truly do value and appreciate everyone who has supported me and my silly endeavors up to this point! And I really am excited to bring anyone who’s interested along with me on this new journey with my sophomore graphic novel!

Russell Sellers: Thanks again for talking with us and sharing your projects and thoughts with the P2BN readers! We’ll be on the lookout for Deuces Wild.

Brett Brooks: Thanks for bringing me in, it was a blast!

For more on Brett Brooks’ kickstarter project – check out the project’s official video: