The Green Lantern family has undergone some changes of late due to new creative teams taking on the titles and a huge event titled Lights Out shaking up the status quo. In the aftermath of that event, some big things are happening in the pages of Green Lantern Corps. In this exclusive interview with GLC co-writer Van Jensen, he talks to Russell Sellers about his love of John Stewart, developing new characters in the Green Lantern Corps, bringing back some classic characters, developing his creator-owned project Pinocchio Vampire Slayer and his undying love of basketball. 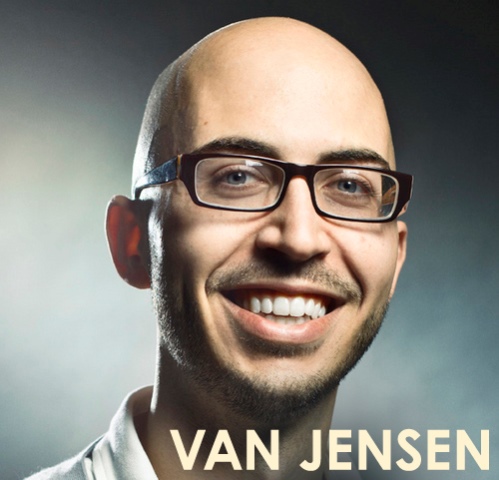 Russell Sellers: I’d like to start with some of the things that just happened in Green Lantern Corps #26. Namely, we saw John and Hal have a pretty serious talk about the state of the Corps, including John punching Hal in the face. Where would you say the relationship between these two is at right now and what does it mean for the Corps as a whole?

Van Jensen: Things are definitely tense between the two. John wasn’t too happy to learn Hal sent Guy Gardner off to infiltrate the Red Lanterns, and Hal’s declaration of war against other light-wielders puts a kink in John’s relationship with Fatality. But that moment allowed John the chance to let off some of his frustration, and he came out of it realizing that Hal has been doing the best he can in an incredibly challenging situation. These two have a long friendship—neither of them is about to throw that away.

RS: It’s really cool how we’re getting to see so much of the new recruits, especially Jruk who has kind of become a fan favorite. In issue #26 we saw how his homeworld reacted to the recent events with the Corps and it looks like they and several other worlds feel they don’t need the GLC. How does something like that affect the other new recruits and is this something you’re going to explore with them as well?

VJ: People really have taken to Jruk. I didn’t expect that, but it’s been fun to see him develop a following. He’s really a great character to write, since he’s so unlike my own personality. And yes, we’re going to see more from the other recruits, including some glimpses into how their worlds and families react to this new perception of the Corps. I’d love to do more with the recruits (and with lots of other characters), but it’s always a challenge to fit everything.

RS: When the new creative teams came onto the books the main four titles streamlined their story and build toward Lights Out. Now that it’s over, are the titles beginning to go their own way and if so, what does that mean for your book? Any overarching theme you’re hoping to explore?

VJ: The goal of Lights Out was to offer a jumping on point for readers to sample the different books, each of which is fun in its own way. Justin Jordan and Charles Soule have great concepts that they’re exploring in Green Lantern: New Guardians and Red Lanterns, respectively. Rob and I are tying things a little more closely in Green Lantern and Green Lantern Corps, exploring that big issue facing the Lanterns: How do you police a universe that doesn’t view you as heroes? The Corps has a lot of egg on its face (or, to be more direct, blood on its hands). And some of its old villains see an opportunity to take advantage of that and deal the Lanterns a death-blow.

RS: John Stewart seems to be your favorite character to write. What makes you a fan of him and can you think of a moment, either in comics or animation, which made you a fan?

VJ: There wasn’t any one moment, though I remember reading Green Lantern: Mosaic when I was younger and being impressed by how smart and complicated he was. John really deliberated over what it means to be a hero and a leader, how the weight of his decisions impacted so many. That’s something central to the character that I’ve tried to focus on.

RS: What’s it been like working with Bernard Chang? His work on issue #26 was particularly complex in several scenes, especially when John designed and Mogo built a new base of operations for the GLC. Are you both coming up with designs?

VJ: Bernard is great for so many reasons. He’s a top-notch artist, which is obvious from a glance at one of his pages. He’s also very focused on storytelling, and every issue he helps me learn a little more about writing. I’m still very new to this, so his experience has been crucial. I owe him a lot. And you’re absolutely right, GLC #26 is just typical Bernard. He spent a lot of time designing the new base on Mogo, which is fitting, since Bernard is trained as an architect. I gave a few notes on the buildings needed, the general layout of the city and the type of material Mogo would be able to use as the base of the buildings, but Bernard ran with it. He has elaborate renderings of all of the structures. He’s amazing.

RS: You’ve made a lot of Green Lantern fans happy with your portrayals of the various Corps members, but is there any particular DC character that you hope to write in the new future? Have you pitched any new stories to DC recently, not related to Green Lantern?

VJ: I’ve been able to scratch a lot of those itches, so to speak. In upcoming issues, there are a lot of cool Lanterns appearing for the first time in a while. Von Daggle is a primary one, as is Oliversity, who’s just a big space snake. I have a handful of other favorites that I’ve been wanting to throw in there.

I actually haven’t ever pitched anything to DC. I’m trying to learn the ropes on Green Lantern Corps, and like I said, I still have a lot to learn. Years back, I did put a pitch together for a Creeper story, going back to the Ditko iteration of the character. That’s in a drawer somewhere, I guess. I don’t know that anyone is demanding a Creeper relaunch.

VJ: Actually, yes, an omnibus of Pinocchio, Vampire Slayer collecting all four volumes of the story will be out in summer 2014 from Top Shelf Productions. We’re very excited about that. And Dusty Higgins and I are working on an all-new story that we’ll release digitally next year. It’s getting close to done, but we’ve both been pretty swamped with other work.

I’m also getting ready to self-publish a book through Kickstarter, probably in early 2014. It’s the first graphic novel I wrote, a book called The Leg. It’s an adventure story set in 1930s Mexico starring the disembodied leg of former Mexican President Santa Anna. It’s illustrated by Jose Pimienta, who turned in some amazing work. It’s a totally bizarre story, but I’m quite fond of it, so I’ll be glad to finally get it out into the world.

RS: Lastly, I know you’re a big basketball fan so I have to ask who you think is looking good right now in the NCAA and who are you hoping to see go all the way in March?

VJ: I am pretty basketball crazed. I still play several times per week. But I have to admit, I’m mostly an NBA fan. The players are more skilled, and in recent years the style of play has really ratcheted up. I pretty much only watch college ball during March Madness, which means I’m always terrible in my office pool, because I’m clueless about all of the teams. Since I went to Nebraska, I’ll say that I’d like to see the Huskers claim a championship. That would be quite a feat, given that they’ve never won a tournament game. But this could be our year!