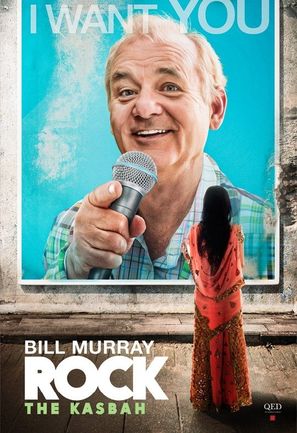 This movie came out in 2015, and is just now making it’s rounds on cable tv and digital platforms. It was released around the world, but I think in the US, it only enjoyed a limited release. Budget was around $15 million, grossed $3 mil in USA, and another $3 mil globally. So it was not a financial success, by any means.

Now we all heard whispers of this movie and may have even seen the iconic Bill Murray in the head bandana and shades, but I don’t think anyone really knew what was happening with this film. How could they if judging by the numbers, no one has seen it.

Director Barry Levinson is one of America’s greatest directors, without question. Rain Man, The Natural, Bugsy, Toys, Wag The Dog, Good Morning Vietnam, so when you say he is attached to a project, you know it will be of a very high standard.  Problem is, it is about a very profound, serious matter starring probably the greatest goofy guy of all time. The two do not mix in this sense and the movie leaves you scratching your head and wondering where the laughs are, and what the hell happened to Bill Murray.

Bill plays rock and roll tour manager Richie Lanz who eats and breathes bullshit. Now this is perfect for Bill – a fast talker, big dreaming con man who can talk his way in our out of anything. He cons talent out of money, promising them big things that never develop. However, when you take a character like that and throw them into the Middle East, which has real problems, it’s not so funny anymore. A con man can not con people who don’t speak the language, are fighting and killing every day to save their villages and won’t let women be seen or speak in public. Richie’s fast talking bullshit kind of takes a back seat to all that, and is just not seen as funny anymore.

Bill has wandered into these weird films before, but they were always outright weird and usually took place in another time. Get Low, City of Embers, Fantastic Mr Fox, Steve Zissou, Darjeeling Unlimited – this movie takes place today, rooted in today and there is nothing weird about the premise at all.

Lost in Translation was in 2003, and that is probably the closest film we have on record to compare Rock the Kasbah too. Bill is alone in a strange land, and connects with a strange young girl and decides to fight the system. Only this time instead of fighting boredom and the life of fame and fortune, he’s fighting for women’s rights in Afghanistan.

Not a really good subject for comedic fodder, I would agree, but this movie is about fighting for a woman to be allowed to be seen and heard on Afghanistan television. Not too much to laugh at here, but Bill takes a jab at it, and misses the mark big time.

Along the ride is a gorgeous Kate Hudson who plays the local prostitute who lives in a double wide trailer and always has a line around the block waiting for her sweet services. She kind of becomes the Scarlett Johansen of the movie and becomes Bill’s sidekick who wants to get out of that country and lifestyle as quick as she can.

Bruce Willis plays a vigilante who loves guns and violence and kind of tags along with them here and there throughout, not saying much, not doing much. I guess maybe Bruce was bored or wanted a vacation in the Middle East.

The amazingly talented Zooey Deschanel uses all her talents here and is delectable in doing so. She plays one of Bill Murray’s clients, she is a singer / performer / secretary and she is the one Bill flies over to Afghanistan do a USO concert. Upon arrival Zooey freaks out, terrified of all the guns, soldiers and fighting, robs him of his passport and money and flies back to the USA in the middle of the night. Zooey sings great, looks great and acts great in this, and gets the film off to a great start.

Problem is once stranded in Afghanistan, the film has nothing but serious notes and very profound problems to deal with that you just can not make light of. Subjects like war, death, guns, violence, human rights, poverty, sexism and prejudice. Unfortunately I think Barry and Bill found this out after the fact. The icons took on very heavy subjects that torture people around the world, and tried to make a comedy out of them. Laughing about fighting ghosts, or playing golf like in Caddyshack is one thing, trying to laugh while fighting for women’s rights, is quite another.