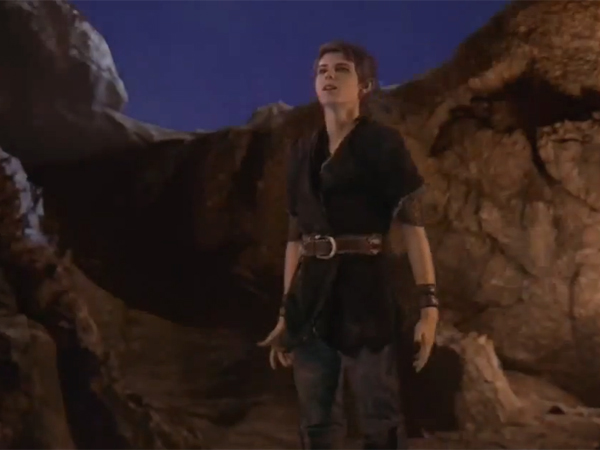 To say that the “Think Lovely Thoughts” is the biggest and most eventful episode of Once Upon A Time’s Third season would be an understatement. We may have not made it off of Neverland yet, but things exploded this week, sending shockwaves throughout the fan community and on the Island of Never itself. The big reveal of who Peter Pan is to Rumplestiltskin did not disappoint (or did, depending on who you are), and as the group tries to #SAVEHENRY as well as help David and Snow find an alternative to spending their days in Neverland, all while another beloved (and reviled) character faces a peril the depths of which we still don’t know.

Once has many central themes that get repeated over and over and OVER again and everything that unfolds is magnified across time and realms in various ways through devices like Flashbacks and a lot going on in the present lives of a host of different characters in many locales at once. If Snow is worrying about bloody family bonds and dealing with being an abandoned child, so is everyone related to her. Likewise, if the flashback portion of the episode is drenched conceptually in true love or the consequences of all our actions (especially magic), then one can be assured that the melody will ring throughout every story line being touched upon in that episode. And of course the notes will be heard in episodes to come. The writers are exceptionally proficient in composing this type of story.

One of the most dominating themes of Once and fairy tales in general is trust and treachery. Characters routinely break promises and betray those whose faith tend to be the strongest, while those with the purest hearts tend to forgive again and again.

Few have been as treacherous as Goldie-Stiltskin, who has incessantly reminded us that magic always comes with a price (something Henry proclaims when starring at his “noble” death) and who has only helped others if they were indebted to him later. So it’s no wonder that when Regina and Gold reconnect with the rest of Storybooke’s finest, Neal is quick to forewarn of the seer’s prophecy that “the boy will be Rumplestiltskin’s undoing” and the deal that Pan had made with Gold in exchange for Henry- a deal that takes on a richer meaning in the context of this episode’s shocking reveal. The group responds accordingly with outrage, disdain, and caution – knowing full well what The Dark One is capable of, each of them having to deal with him at some point in their Fairy Tale past or the more recent Storybooke one.

He is family though and that counts for a lot no matter what realm you are from, with nearly everyone sacrificing for the concept of family…blood or not. Everyone who is on that Island who isn’t Tink, Pan or Lost Boys are there to save one of their own; Bae and Rumple were willing to dive head first into the unknown to have better lives with their families (the only thing that matters); Wendy and Her brothers have let themselves become pawns in Pan’s chess game because each is trying to ensure the safety of the other; Charming stepped in for his twin in order to save his family farm; Charming and Snow gave up their daughter to ensure that she wouldn’t be affected by the Curse; Neal let Emma go to save Storybooke. True love carries a great deal of weight in the lives of all of our favorite characters, but family trumps that.

What we learn from the flashbacks to Gold’s past is that family is very important to him even going back to his earliest days, and that his childhood devoid of one created a deep-rooted need for it. As a child he wanted it so bad that he wasted his opportunity to sever his ties to a hopeless situation in order to save the only family he had, and as it would turn out that person wouldn’t do the same for him.  We also see the beginnings of his cowardice which combined with his trauma at being abandoned would eventually lead to his clinging to power…and his own abandonment of Nealfire much later (and also involving a magic bean.)

But he has changed. Finding one’s true love will do that to a person. The only time he ever truly turned his back or (literally) let go of family was when he chose power of being The Dark One over a fresh start with Bae and by his own admission had regretted the decision since, The Curse a diabolically effective attempt at getting back to his son. It is fitting that by the time Neal seems to begin to trust him outside the Skull Island – or at least realize that he is telling the truth about sending his shadow off to hide the dagger – it’s pretty much too late.

Finding out that Peter Pan is Rumplestiltskin’s deadbeat Dad seems obvious in retrospect. I mean…aren’t all deadbeat Dads like Peter Pan when it comes down to it? He was practically living like a child, spending his days drinking and gambling at the pub (probably also visiting ladies of ill repute); so for him to literally choose to be a kid and stay in the place  children visit in their slumber follows suit. Fan communities have been speculating about their relations since the Pied Piper episode, with very few positing that they be related in this way. But it makes sense, and lends itself wonderfully to this crazy family tree. Lucky for him, good breeding has led to his way around the hour-glass that the Smoke Monster errr Shadow indicated would countdown until his youth finally ran out. In terms of the world that WE know (as opposed to Fairytales and Magic realms), it almost like Pan ruined his kidneys  through hard living and Henry was perfect genetic match to provide the kidney donation.

Because somewhere down the family tree (a tree that Rumple metaphorically waited under for his flight-hungry father to descend from) lies Henry, and despite being abandoned and let down time and time again Henry has complete faith in his family and in his calling as a hero, which is a beautiful thing…to an extent.  He has broken the cycle that has plagued his family in a lot of ways, slightly hesitant about trusting everyone that he knows has lied repeatedly, but not at all close to the skepticism that we see in the rest of his family.

That’s why he is The Truest Believer:  He is pure of heart (a golden one apparently). If he could save just one life, he would. And sacrifices are just something that a hero must bravely accept.

Here is my heart.

Unfortunately, the stories of his family’s bravery inspire him to true and unwavering nobility (he is a prince after all), but he seemingly has learned nothing from the dark side of his family tree or his adoptive mom: that one can’t always trust people at their word.  His unyielding confidence that people who appear sincere couldn’t possibly be lying would be endearing if it didn’t make me want to throw my television at another television on which the program is playing. It’s like he forgot that Pan could possibly be lying despite catching him lying several times, and having dealt with deceit before, AND with his parents telling him EXACTLY what is happening . Easily the most frustrating plot point  to have to swallow so far,  Henry’s faith is both wonderfully enchanting in itself and maddening at the same time as we watch him be taken as a fool by the person who started the long line of abandonment that could emblazon his family’s crest.