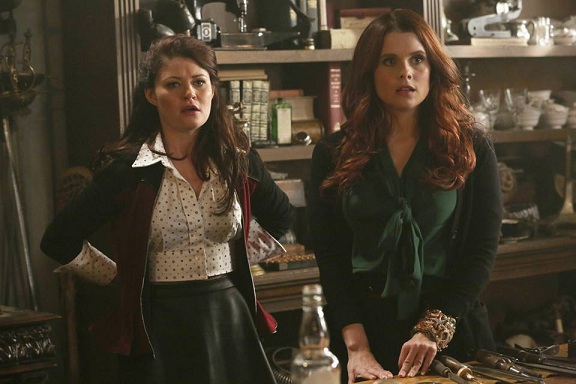 The most refreshing part of this week’s episode, “Dark Hollow” is to finally see that the people of Storybooke are carrying on in their daily lives, possibly even able to breathe easier now that everyone who ever caused any upheaval in the town AND in their homeland has journeyed off to Neverland to #SAVEHENRY. Happy and the rest of the Dwarves (sans Grumpy who has a sentimental heart apparently) note how nothing bad has happened since the Charmings, Rumple-Goldskin, The Evil Mayor, and Emma set sail.
Belle, who is refusing cheeseburgers like it’s her job (can’t a girl make healthy choices?), out of despair over Rumple’s cheerily pessimistic yet probably fatal departure gets some good news via the Dwarves and a quirky and endearing cute and clueless newcomer, Ariel. Rumple is alive and doesn’t need to die but he needs her help finding….something? Rumple is rightfully vague and cryptic when sending his message along with Ariel and leaves it up to Belle to find the thing he needs to defeat Pan without also giving up his own life.

Unfortunately for Ariel and Belle, two guys with guns outrun the coming cloaking spell in their inconspicuous vintage, red sports car and let Belle and Ariel inadvertently lead them to the item that Rumple was looking to bring to the Island. Like Greg and Tamara, they too work for the mysterious “Home Office,” which we now know has something to do with Pan. But unlike the recently departed, these two know exactly who they are working for and why.

After Ariel is more amazed by simple household objects than your average person attending a Phish concert, Belle uses HER sentimental heart to identify the object needed: the chipped cup that Gold held to so dearly as a reminder of his love with Belle.  She goes to the cabinet where he kept it which was enchanted like everything else he owns, and they find Pandora’s Box which is like…..really, really evil. And the thing that will defeat Pan (details forthcoming). Before Ariel can bring it back, the two dapper gents from the Land of 10,000 Lakes enter from stage left and intercede, holding captive and tying up the two princesses in The Antique store while setting out to destroy Gold’s best chance of making it out of Neverland alive.

Luckily, Belle is quick to put puzzles together and figures out how to break their restraints using Ariel’s fishy-half. Thinking on her feet again, Belle  figures out that the two outsiders are going to destroy the mysterious Box and where and the two head down to the mines where she performed the  cloaking spell, as well as where Greg and Tamara tried to destroy the town just FIVE days ago. There she is her quickest and pulls the old “cart in the coal mine” move, disarming Pan’s “boots on the ground” and compelling them to a confession. Pan’s two men are actually the Brother’s Darling, forced to do Pan’s bidding to save Wendy whom Pan has had imprisoned for a century in Neverland. They say that trying to be heroes is what got them in the position to begin with and warned that trying to defeat Pan could end up badly, but end up joining forces with Storybooke’s finest anyway.

Regina and Rumplestiltskin spend the time waiting for Ariel by insulting each other (the line about Regina being jealous and not having anyone was one of the meaner passing comments so far). Ariel eventually returns to cut off what could have been the best dialogue of the episode to deliver the box, as well as messages about Belle and the new info on Pan and The Darlings. Phase Two seems ready to begin (the final phase according to next week’s tease?).

Compensating Ariel for crossing realms and procuring the box, Regina lets her keep that magic bracelet that she had given to her prior, and enchants it so that the charm’s effects don’t expire, granting the ability to have a tail or legs… which depends on whatever Eric is into. Ariel is also free to return to Storybooke and live with others of her kind (former fairytale characters leaving dual lives. Actually, she’ll only have that one, but seeing as how she is a literally a fish out of water, I think she will fit in just fine). She can also search for her possible true love, Eric – whose button she found, while forging a new life filled with amusing bewilderment at things we take for granted. Like the gun’s ability to increase the likelihood of hostage situations. Either way, finding one’s true love is the most important thing EVER, so Ariel has found herself in good fortune.

For the rest of Storybooke’s first family of powerful magic, things are starting to feel tumultuous as they split off into groups to find Tink and see if Neal’s plan to steal Pan’s Shadow (Marilyn Manson’s finest role yet) and use it to get off Neverland can actually work. Everyone loses as sex and anger fuel many of the interactions.

Snow insists on giving David Charming the cold shoulder (nudge, nudge. Pun, Pun), and it makes a lot of their time onscreen together searching for Tinkerbell’s abode tough to watch. As a guy who has said some stupid stuff and kept things from a significant other, which like Charming did for all the right reasons, seeing him talk and talk out of a need to try to be normal made me cringe. But they get it all out. “You shouldn’t have kept secrets ya bug dummy.” “But I was thinking of you.” “I would have lived on the moon if you were there. “ Well it was a little different but you get the point. Thankfully the writers didn’t drag out the tension any longer than was necessary.

Emma’s love triangle with Neal and Hook, however, doesn’t look like it is being resolved anytime soon.  They trek to the darkest part of Neverland, appropriately named Dark Hollow, which is the place that the victims of Pan’s shadow (Antichrist Superstar!) are forced to reside. The plan is to draw Shadow Pan to a candle and trap it using the spaghetti strainer that young Bae had made. How they use it to get everyone off the Island after that is beyond me, but I guess we will be elucidated about that one later.  On the way to Dark Red hollow, Hook and Bae bicker about Bae’s cutlass that he since gifted to Emma as a way to remember the man she thought was dead. It wasn’t really the cutlass, just as it wasn’t the lighter later. It is about Emma, who staunchly repeats that she is picking the Third Party Candidate, her son Henry. She won’t choose between these two because all she cares about is grabbing Henry and getting out of Neverland and Pan’s grasp. I’m sure she is concerned with the welfare of her whole search party too, but if one or two who weren’t direct relations didn’t make it home I’m sure she wouldn’t be overly crushed. Oh wait, the Charming-Snows might have to stay in Neverland, to #SAVEDAVID and keep him alive. And Regina dying might actually solve a lot of problems for her, but still Emma would like to see her make it back in one piece. Give or take a few less digits on her appendages.

The Truest Believer was pretty skeptical of Pan after hearing from his Moms, and started to push back against Pan, his captor…even if Henry doesn’t see him that way yet. Henry thinks Pan is up to something, and he absolutely is with his dragging around people in cages lifestyle that he is rocking, but it’s still fun to watch Henry think he is a Ninja, stealthily “eluding” The Lost Boys until he finds a ladder and a fort that you just KNOW he is going to climb. Curiosity always gets the best of that kid, the resident John Locke that he is, and here his ascension up the ladder starts to come across as a reverse “Hatch.” It starts to really feel like Locke’s arc when Henry meets Wendy Darling who convinces him that she is sick due to the waning powers of the Island and that Henry must save Magic, thus saving her as well. Of course it’s a carefully constructed ruse by Pan, but Henry feels bad about not trusting Pan after discovering this “secret,” attributing the lying to noble causes, and then gets ready to take on Skull Mountain at Pan’s request. This is him entering the code and pushing the button every 108 minutes. Henry is unfortunately ripe for the grift – just like Locke, as well as prime for being re-scammed – also like Locke. Being the truest believer has its downsides, hopefully not as tragically for Henry as it was for Locke.