The Packers were able to reach the divisional round in 2012, but came up short against the 49ers. Aaron Rodgers is the quarterback of the Packers for the next decade, if not more, and Packer fans are hoping there isn’t a dip in wins for the team. With the loss of veteran wide receiver Greg Jennings to the Vikings, the Packers will need their young wide receiver core to fill the void left behind. On the defensive side, Clay Matthews is the leader and will look to motivate a new-look defensive unit that will be missing Charles Woodson and Al Harris in the secondary. It would appear that the Packers are no longer a sure fire bet to win the NFC North.

The Packers haven’t had a solid running game in several years and need to find someone who can take the pressure away from Aaron Rodgers. Most defenses will be able to blitz the quarterback knowing that there isn’t a running game to speak of. Rodgers doesn’t have the weapons he once had with Jennings leaving to go to a rival. However, he still has Jordy Nelson, who is battling a knee injury, and an elite tight end in Jermichael Finley. Quite a few players retired for this team, as well with Driver hanging up the cleats along with Ryan Longwell and Al Harris. It’s going to be a lot of fresh faces in Lambeau as that also gets younger in the process. Signing Vince Young isn’t all that bad. While Young isn’t a great QB, he does have a winning record and would have weapons to throw too for really the first time in his career (on a regular basis)if given the chance. Packer fans are hoping that won’t have to happen.

The Packers start off the year playing against the team that knocked them out of the playoffs in 2012. That’s an easy pick to be considered a key game for them. The 49ers made a lot of moves and could be a test to see where the Packers are in terms of status of the NFC. Both games against the Vikings are key as always. Especially in Week 12 when Greg Jennings returns to his former home field. Each game will have incredible crowd noise and will hopefully be competitive. Lastly, the game against the Atlanta Falcons in Week 14 is an interesting one as well. Aaron Rodgers has been on top of the mountain for a few years now and Matt Ryan is seen as the next elite quarterback. I’m treating this as a battle between the future and present of top NFC quarterbacks.

Without Nelson playing, the Packers appear to lack a strong number one receiver. They have a great tight end but they need someone on the outside that can produce long catches. This is Jordy’s time to shine and make people forget about Greg Jennings. Can he make that happen? I think he can. I wouldn’t be surprised if Finley has the stronger year, though my eyes will be on Nelson.

One less win prevents the Packers from keeping their spot at the top. The losses on defense will have a big impact for the team and not having any kind of running attack that is established will hurt their offense as well. Not knowing if they have a number one wide receiver without Jennings has the Packers offense not looking as scary in recent years. The NFC North is up for grabs, and I see the Packers looking up, but still making the playoffs. It’s hard to bet against Aaron Rodgers.

A lot of veteran faces are gone and so is some leadership. I’m not saying that guys like Matthews or Rodgers don’t have leadership, because they do, but now they have a lot of question marks regarding their future. The Packers are no longer a dominate force in the NFC. 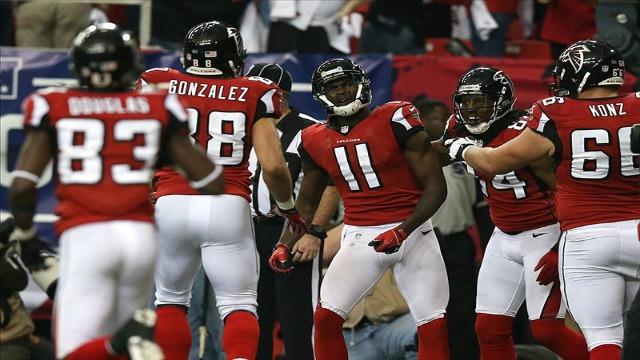 Heading into last season, the Falcons (and QB Matt Ryan, in particular) looked to shed their “choker” label and make a deep playoff run. In those terms, the season should be considered a success: Atlanta tied for the best record in the league at 13-3 and reached the NFC championship game. But even those achievements could not erase the perception that the Falcons wilt in the playoffs, as they played poorly in the second halves of both a win against Seattle and loss to San Francisco. Fairly or not, the questioning of Atlanta’s toughness and “clutchness” can likely only be dismissed by a championship. After a tough offseason, they are hoping to prove that last year was not the closest they will ever come to that goal.

The Falcons were hit hard with the salary cap hammer this offseason, forced to part ways with a number of veterans while adding just two through free agency. Sack leader John Abraham has been replaced by Osi Umenyiora, who seemed to be aging poorly last year. In my opinion, Umenyiora has always been streaky, looking terrible for some stretches and dominant for others. If he’s motivated to prove the Giants wrong, Atlanta may have gotten a steal; if not, they will struggle to put pressure on the quarterback. Starting corner Dunta Robinson is also gone, and the Falcons are counting on first-round pick Desmond Trufant to step into his spot, with fellow rookie Robert Alford also likely to see a good deal of playing time. How quickly they adjust to the NFL will determine how good the defense can be.

On the other hand, the star-studded offense returns most of its starters. Center Todd “Troy” McClure retired, presumably to star in a musical adaptation of Planet of the Apes, but the rest of the offensive line returns. Leading rusher Michael Turner is gone, taking his 3.6 YPC with him. Steven Jackson may be nearing the end of his career and/or usefulness, but if he can still handle 200 carries this year, he should be an improvement on Turner. With future Hall of Famer Tony Gonzalez changing his retirement plans, the offense will still put up points.

The Saints look to bounce back and compete for the division title this year; the Falcons won’t have to wait long to see how they match up with them, as they travel to New Orleans in week one. A home matchup with New England in week four should also provide an early test. If Atlanta hopes to repeat as the top seed in the NFC, second-half games against Seattle and Green Bay will be key.

The Falcons did not have a top defense last year, and the unit suffered significant losses in free agency. They reloaded through the draft, but the only free agent brought in was Osi Umenyiora. As if that wasn’t pressure enough for the new starting defensive end, he’s also coming off a down year in which he totaled just six sacks. If he were able to return to form, it would go a long way toward helping Atlanta avoid regression this season.

The Falcons overachieved last year, with the point differential of an 11-win team, and lost talent due to salary cap concerns, so they seem likely to fall back towards the rest of the NFC. On the other hand, the offense is still loaded with talent at the skill positions, and regressing from 13 wins still likely leaves them in the playoff race. My gut feeling is that they end up losing the division title, but hanging on to a wild card spot.

After reaching the top seed in the NFC and coming within a touchdown of playing in the Super Bowl, the expectations of Falcons fans will be sky-high going into this season. Unfortunately for them, Atlanta relied on a good deal of luck to reach that record. Any drop-off in the luck department, combined with a loss of talent to free agency, would mean that the Falcons will struggle to replicate last season’s success. But this is still a likely playoff team, and once you reach the playoffs, crazy things can happen. That’s about the best I can say for the Falcons’ Super Bowl hopes. It may sound like faint praise, but many other teams would love to be in that position.