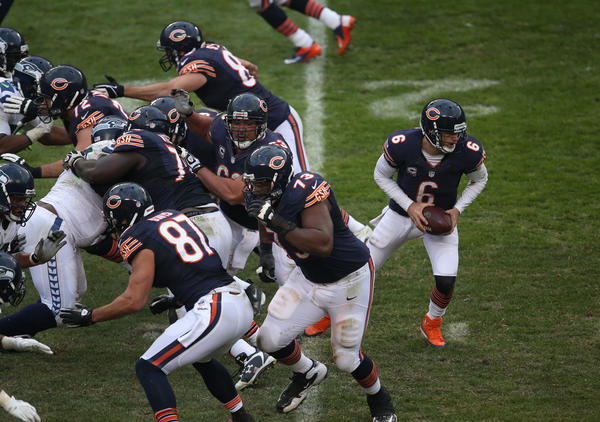 In 2012, the Bears started off hot winning seven of their first eight games. They ended up finishing 10-6 and missed the playoffs. The failure of reaching the playoffs saw the firing of Lovie Smith, who coached the Bears to the Super Bowl in 2006. With a new coach, there are new expectations. Matt Forte is expecting to get the ball more and have a bigger impact in the offense. Jay Cutler will look to stay healthy for a whole season and the defense will look to return to dominance despite not having Bears legend Brian Urlacher leading them. It’s time for new coach Marc Trestman to take control of the Bears. Trestman was a successful coach in the CFL where he won two Grey Cups and never won less than 10 games in an 18 game season. Chicago Bears management is surely hoping that success will carry over to the NFL. Let’s see how the Bears will stack up in 2013.
Key Additions & Losses
Additions: Martellus Bennett (TE), Trent Edwards (QB), Curtis Brinkley (RB)
Losses: Brian Urlacher (LB, retirement), Sedrick Ellis (DT, retirement), Nick Roach (LB, Raiders)

Aside from the retirement of Brian Urlacher and firing of Lovie Smith it has been a quiet off-season for the Bears. Bennett should be a fine tight end while Edwards will battle for a backup QB spot in Chicago. He was just signed on August 18th. Brinkley doesn’t appear to be in line for any kind of starting job. He will surely be behind both Matt Forte and Michael Bush on the depth chart.
Key Games
@Green Bay (Week 9), Dallas (Week 14)
Whenever the Packers and Bears play you can expect a great game. It’s one of the better rivalries going in football. If they can have a strong start to the season they will need a big second half win to give them confidence instead of falling apart like they did last year. Right after a bye week, it could be a turning point for their season. In week 14 they have a Monday night game against the Dallas Cowboys at home. Primetime games are always a key game and must see, right?
Player to Watch
Jay Cutler
Cutler is one of the most inconsistent quarterbacks going today. One week he will throw for 4TDs and you’ll think he finally knows what he is doing. Then, the next week he will throw 4INTS and it’s as if he forgot how to play the position. Matt Forte can’t be effective if the Bears don’t have a productive passing game. That falls on Cutler and his ability to make smart plays with the ball.  Cutler now enters a contract year and big moves were made in the offseason to shore up the offensive line by adding Jermon Bushrod and Kyle Long.  Cutler is left without any excuses.  If Cutler can put everything together for a whole season AND stay healthy, the Bears are a wild card team. If not, then it’s going to be a long season if you’re a Bears fan.
Better or Worse
2012 Finish: 10-6 (Third in NFC North)
2013 Prediction: 8-8 (Third in NFC North)
I’m not seeing the Bears as a above .500 team. Starting the year against the Bengals, Vikings, and at the Lions and Steelers is not an easy start. You could expect a 1-3 start there. A good start to the year is important for this team as they will need to keep up with the Packers, Vikings and Lions. If they can get off on the right foot they could be in a good spot at the end of the year as four out of their last five games are home games. Important games in a chilly Chicago can help the Bears reach the playoffs. Once again, it all comes down to a good start to the season.
Final Thoughts:
I could be wrong about the Bears and they could very well be a surprise team in the North. A new coach, an inconsistent quarterback and their defensive leader gone from the team make me believe that won’t be the case. Bears fans will be left out in the cold again this year.
– Bob Colling 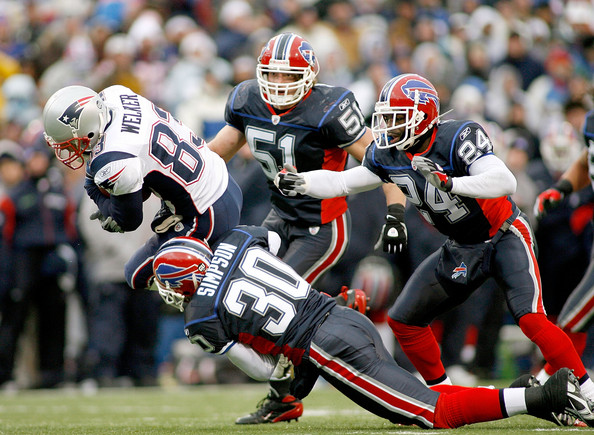 It’s become a familiar story in Buffalo. New coach! Exciting new QB! A new beginning! Bills fans cautiously tell themselves, “This may be the year the Bills finally get back on the map!”

Ever since the Buffalo Bills’ historic back-to-back-to-back-to-back Super Bowl losses from 1990-1993, the franchise has been in a cycle of fielding disappointing teams, followed by a hyped up “new beginning” featuring either a new QB, like Drew Bledsoe, or an “exciting” new coach like Mike Mularkey, only to deliver yet another disappointing team. This process has been playing on repeat for over twenty years of torture and agony for the diehard Buffalo fans.

And here we are in 2013, with yet another seemingly exciting fresh start. Gone are the old guard of GM Mark Levy and Coach Chan Gailey. And in comes new coach Doug Marrone, who had some decent success over the last four years in turning around the football program at Syracuse. Marrone plans to finally unleash stud RB CJ Spiller, giving him full-time carries in his third year with the team, which almost feels like an addition in itself. We also have the exciting rookie QB EJ Manuel, the only quarterback drafted in the 1st round this year.

The signing of Marrone and the drafting of Manuel were both seen as risky moves by most pundits, but it’s clear that the new GM Doug Whaley and his advisers have a vision for this team, and goshdarnit they are stickin’ to it! Meanwhile, Bills fans are left wondering, will this be the year that the “fresh start” finally delivers, or will the cycle of disappointment continue?

Seemingly losing half of their team to the Tennessee Titans, the most important loss is probably the least talked about name. Guard Andy Levitre was very good last year in protecting Ryan Fitzpatrick, and he will continue to do so if Fitzpatrick wins or overtakes the starting job in Tennessee. But Fitzpatrick didn’t live up to the hype generated by his early stretch of great games in 2012 – nor the contract he received in reaction to it. For half of his price tag, the Bills were able to bring in Kevin Kolb. Kolb has certainly been a disappointment after being traded to the Arizona Cardinals and signing a large contract with them, but he was quietly good last year in the games he played in. When Kolb is healthy, he is a serviceable NFL QB, and serviceable is all you really need when looking for a veteran backup QB to bridge the gap to an up and coming rookie.

While EJ Manuel has looked terrific in the preseason, showing the ability to pass accurately and create some excitement with his feet, a knee injury will likely mean Kolb ends up getting the starting nod in Week 1. But once Manuel is healthy, expect a short leash on Kolb if the Bills aren’t contending. Even if Kolb is playing well, the Bills have put in their lot with EJ Manuel and will do everything they can to see him succeed. This may be part of the reasoning they took USC Wide Receiver Robert Woods in the 2nd round of the draft.

On defense, the Bills will miss safety George Wilson’s steady contributions and leadership over the years. They didn’t do much in free agency to address their defensive woes outside of signing the slightly above average LB Manny Lawson and drafting LB Kiko Alonso in the 2nd round. Instead, they will hope for a turnaround from their $96 investment in DE Mario Williams, who had an injury-plagued disappointing first season with the team last year, and more progression from 2012 1st rounder Stephen Gilmore after a great rookie year.

They also inexplicably cut longtime great kicker Rian Lindell, who was immediately scooped up by the Bucs. Much as they’ve put their faith in Marrone and Manuel, it appears the Buffalo organization has a similar faith in rookie kicker Dustin Hopkins.

The Bills kick off the season against the New England Patriots, a team they have a woeful record against over recent years. Since a home victory in 2003, the Bills have defeated the Patriots only ONE other time in the last decade, a 2011 home game. Still, Bills fans and players alike get fired up for these home games against the hated Patriots, and if a dream season were in the cards there would not be a better way to start it then with a home victory in Week 1. By Week 10, the picture of Buffalo’s season will be clear. They will either severely disappoint once again, or be somewhat in the playoff mix. Only a few hours away from Buffalo, Week 10’s game in Pittsburgh will likely be nearly half filled with Bills fans, and facing the always tough Steelers at home will test this team’s mettle if there is any mettle left to test at that point in the season. And whether or not the team is in contention late in the year, their final home game against Miami in Week 16 should fire up the squad for a competitive game.

All of the talk in the preseason has been on rookie QB EJ Manuel and 3rd year running back CJ Spiller’s potential monster season as a full-time back, and rightfully so. But we shouldn’t forget Robert Woods. He fell a bit in the draft due to some issues with dropped passes last season at USC, but a year ago this time he was seen as a sure-thing first rounder by many. Woods has the potential to be an absolute monster at receiver, and with the attention defenses will have to place on Stevie Johnson, CJ Spiller, and the legs of EJ Manuel, Woods might be in prime position to become the favorite target of whoever mans center for the Bills. He could be a bust like so many other USC wide receivers (and Bills draft picks in general), or we could have the next AJ Green on our hands.

As bad as a reputation as the Bills have for fielding bad teams over the last two decades, it’s rare that they field a truly awful team. Last year was no exception, as flashes of decent play and a great home crowd saw them win six games. An offense that includes heavy play from CJ Spiller has to produce the occasional big game, and the Bills could have at least an average defense, especially now that Jairus Byrd has signed his franchise tender and will report to camp. Of course, as long as Tom Brady and Bill Belichick are alive, it’s hard to see any team other than the Patriots winning the AFC East, even in a year when they’ve lost many key players. The Jets and Dolphins could boom or bust, and I expect one of them to bust below the Bills. I see Buffalo finishing not too far off of last year’s record, with another disappointing season at 5-11, but one filled with some exciting moments and flashes of brilliance from CJ Spiller and the rookies.

While it’s difficult to see the Bills making the playoffs or even having a winning season, that doesn’t necessarily resign them to a lost year. GM Doug Whaley doesn’t expect to build a winning team in one offseason, and will judge the team by the progress it makes under Marrone’s leadership. The Bills have a lot of great talent, from veterans like Mario Williams, Jairus Byrd and Stevie Johnson to tantalizing rookies EJ Manuel and Robert Woods. And heck, if a few things fall right along the way, they even have the potential to prove me wrong and threaten a .500 season. (And as a lifelong Bills fan, I hope they do!)